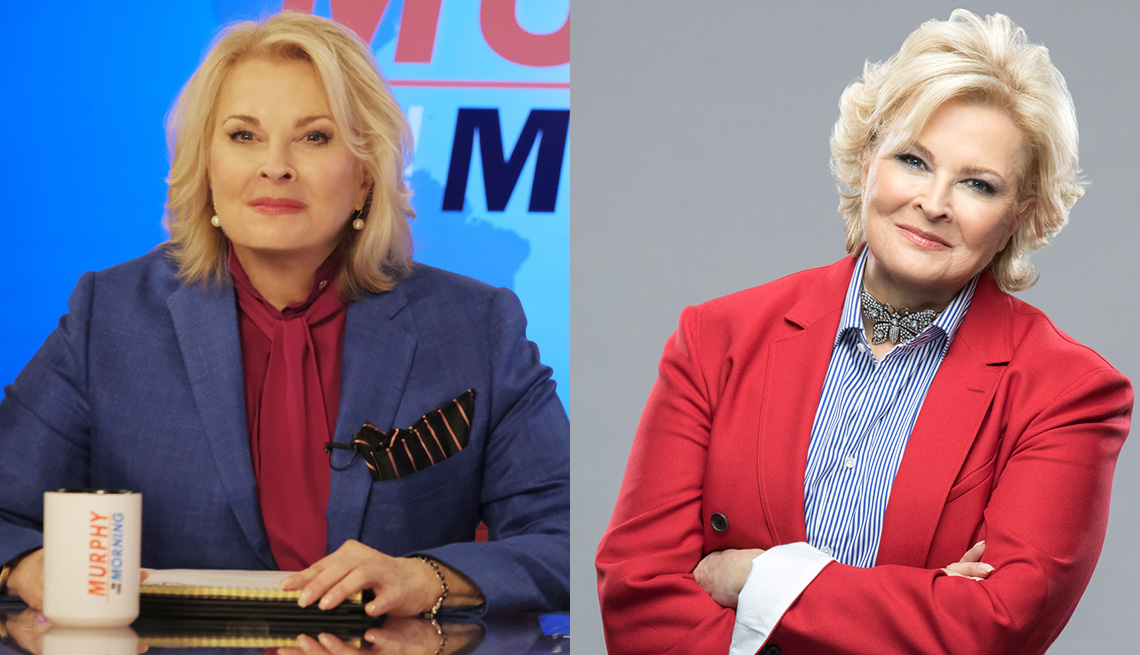 Candice Bergen, in character as Murphy Brown (left) and out of character (right).

As the highly opinionated news show anchor Murphy Brown on the classic 1988–98 sitcom — back on CBS with most of the original cast starting Sept. 27 at 9:30 p.m. ET/PT — Candice Bergen, 72, was so convincing and funny, she won five Emmys before she quit competing for them, to give others a chance to win. But the competitive Murphy Brown would never be as selfless as Candice Bergen. You simply can’t equate the star with her character, even if both of them do a fabulous Aretha Franklin impression. Here are some other interesting ways the two women part ways:

Murphy is an only child (maybe that explains her occasional bouts of bratty entitlement). But Candice’s famed parents ­— ventriloquist Edgar Bergen and actress Frances Bergen (who appeared as a guest star on Murphy Brown) — also raised a son, Kris, now 57 and a philanthropist in L.A. Despite their 15-year age difference, Candice and Kris remain tight-knit.

Murphy, who endured rehab at Betty Ford Center, will still be a recovering alcoholic, so social drinking is out, unless it’s chamomile. Candice, however, can still enjoy a bit of vino, as long as it’s good. Jane Fonda, her friend and costar (along with Mary Steenburgen and Diane Keaton) in the recent AARP-friendly film Book Club, told TV Week, “If you were to imagine a get-together between Candice, Diane, Mary and I, it'd go something like this: Mary's drinking tequila, I'm drinking vodka, Diane is drinking red wine on ice, and Candy is drinking divine white wine probably.”

Romance has never been irascible Murphy’s strong suit. Pregnant from a brief reunion with her ex, Jake (Robin Thomas), she decided to raise their newborn, Avery, alone in a then-controversial story line in the 1990s. Candice, on the other hand, has been lucky in love. Her first marriage, to Oscar-nominated French writer-director Louis Malle (Atlantic City), lasted 15 years until his death in 1995. Marriage No. 2, to real estate developer Marshall Rose, has been going strong since 2000.

Avery was played in 1997 by The Sixth Sense star Haley Joel Osment at age 9. In 2018, Murphy’s now-grown son (Jake McDorman, 32, of the CBS comedy-drama Limitless) appears on a conservative talk show that airs in competition with Murphy’s show. Candice also has just one kid, who’s a journalist — but her relationship with her 32-year-old daughter, Chloe, a Vogue editor who is, says Candice, “as committed a multitasker as Louis [Malle],” is less rivalrous. Candice even rode horseback with Chloe and Taylor Swift when Chloe profiled Swift for InStyle. Until Candice was in her 30s, she and her parents never said they loved each other, but Chloe’s birth healed her grandma’s relationship with Candice. And in college, Chloe phoned her mom every single day. She and Candice call each other “Bunny,” though sometimes Chloe calls Candice “Mamoushka” and Candice calls her “Birdterd.”

How do Bergen and her sitcom counterpart like to spend their downtime? Murphy has a love for poker and fast cars, particularly Porsches. Candice? She loves cooking, playing with her dogs, quality family time, and painting cute animals on fancy old handbags to sell to people like Barbra Streisand for her charity BergenBags. The latter revelation would likely make newshound Murphy wince — until she heard BergenBags’ sardonic slogan: “From One Old Bag to Another.” But Candice, who jokes about aging, believes that “as you get older, you get much smarter,” and she well knows how valuable her old, now new show is to Hollywood. As she told AARP, “As far as older people on television, I don't think they want too many of them. But as long as they bring an audience, they make an exception.”