It’s formulaic and as obvious as a poke in the funny bone, but Book Club is the best thing to happen to grownup moviemaking in quite a while. It’s a delightful, sprightly comedy starring Jane Fonda, 80, Diane Keaton, 72, Candice Bergen, 72, and Mary Steenburgen, 65, as longtime friends who choose to read Fifty Shades of Grey in their book club, triggering earthquakes in each of their love lives, many shameless if rather innocent puns about sex, lots of laughs, and a moving lesson in how to refuse to be like, as one character puts it, “the people who stop living before they stop living.”  It’s 50 times better than the Fifty Shades flicks, which star Dakota Johnson, the daughter of Don Johnson, 68, who winningly plays Fonda’s re-inflamed old flame in Book Club.

Like a slightly younger sibling to the $222 million-grossing The Best Exotic Marigold Hotel films, Book Club is a remedy to Hollywood’s tendency to relegate grownups to marginal roles. “We’re not just playing somebody’s weird fringe aunt who has like two juicy scenes,” as Steenburgen has said. This one is all about our generation(s), and everybody gets a satisfying main-character arc. Steenburgen’s character strives to reheat her 35-year-old marriage without actually listening to her newly retired husband (Craig T. Nelson, 74). His midlife passions focus on the old motorcycle he’s rebuilding, but she dragoons him into training for a dance contest (a sound cinematic choice, since Steenburgen tap-danced her way to an Oscar in the wonderful 1980 film Melvin and Howard).

High-end hotel owner Fonda hedonistically revels in bedroom acrobatics but flees all intimacy like the plague. She is nonetheless pursued by the dogged Johnson. One guy at the film's preview called Book Club "AARP's Sex and the City," and though it's a better movie, he had a point, especially when Fonda's character is behaving like Samantha. 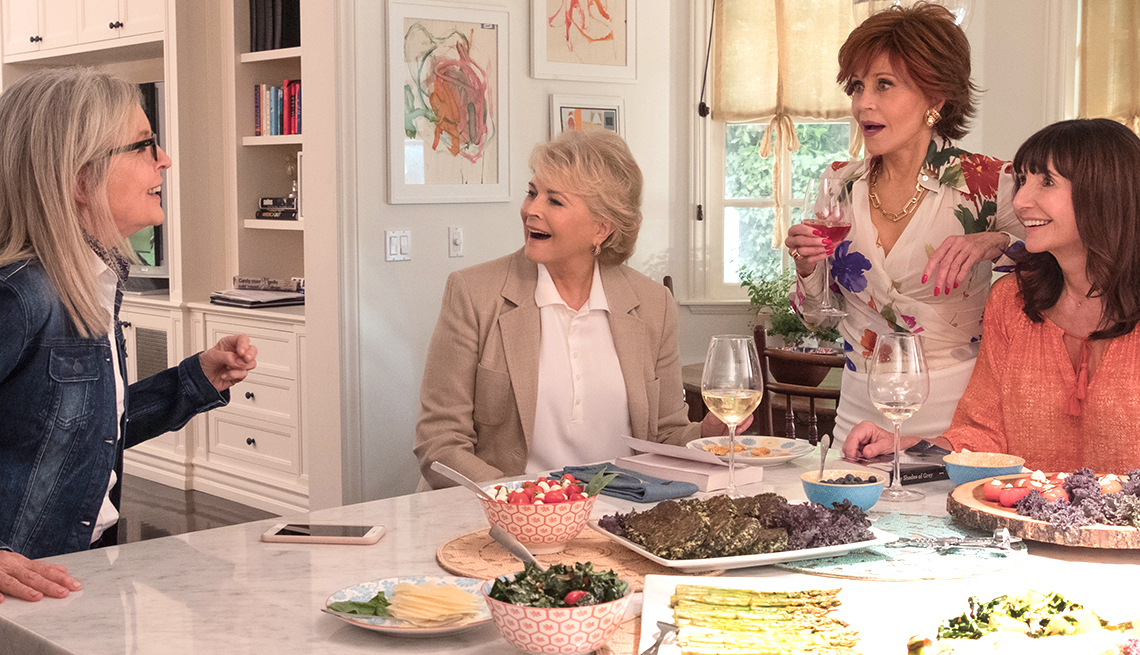 The women of "Book Club" bond over books and wine and then jumpstart their diverse, hilarious dating lives.

As a distinguished judge who reluctantly discovers the mixed blessings of online dating after her ex-husband (Ed Begley Jr., 68) gets engaged to a shapely 20-something woman, Bergen makes every joke land with sardonic brilliance, which bodes well for her hotly anticipated reboot of Murphy Brown on TV this year. She must choose between guys she has swiped right, like Wallace Shawn, 74, and Richard Dreyfuss, 70. And also, she simply has got to stop telling dates she could put them in Fifty Shades handcuffs for real.

Best of all is Diane Keaton as a recent widow with plenty of the off-center, dizzy-yet-smart eccentricity you’ve loved in her characters forever, though this one is less close to Annie Hall than to Jack Nicholson’s high-achiever girlfriend in Nancy Meyers’ Something’s Gotta Give. Her home in Book Club has much of the real-estate fantasy aspect of Meyers’ ultra-lucrative rom-coms, and as her rich, hard-to-shake pilot suitor, Andy Garcia, 62, surpasses Nicholson's charms — he’s like the opposite of Nicholson in Terms of Endearment, a flyboy who wants to settle down.

Keaton’s relationship with her kids (Alicia Silverstone and Katie Aselton) adds some family love trouble to the kind of courtship that preoccupies her book club, deepening the film’s appeal. “We can put you up in the basement anytime,” her kids assure her, oblivious to the fact that she’d rather live in her paradise mansion in Santa Monica than their basement in Arizona, even if she’s living alone. Though she’s doing just fine on her own (as long as she has the support of her grownup-girl posse), her well-meaning but anxious offspring simply cannot see her as a person with any kind of life ahead of her. So of course she welcomes Garcia's line when he talks about their future: “You’re my person.”

Sure, the Book Club ladies are caricatures, and their steamed-up love lives will leave some rom-com-hating viewers cold. But it’s good to see a big-studio movie that believes people over age 50 can actually remain persons. And wait, there’s more! Book Club producer-writers Bill Holderman and Erin Simms — a producer of the Fonda-Robert Redford reunion film Our Souls at Night — have two eminent grownup films coming out in October: What They Had, a Sundance Film Festival hit about Alzheimer’s with Blythe Danner and Hilary Swank; and Old Man and the Gun, starring Sissy Spacek and Redford in what is said to be his last film role, as a 70-year-old who escapes from San Quentin and pulls off a series of heists — based on a real guy. If movies like this, which treat grownups like people, start winning awards and spawning imitators, Hollywood just might grow up at last. And make more money. 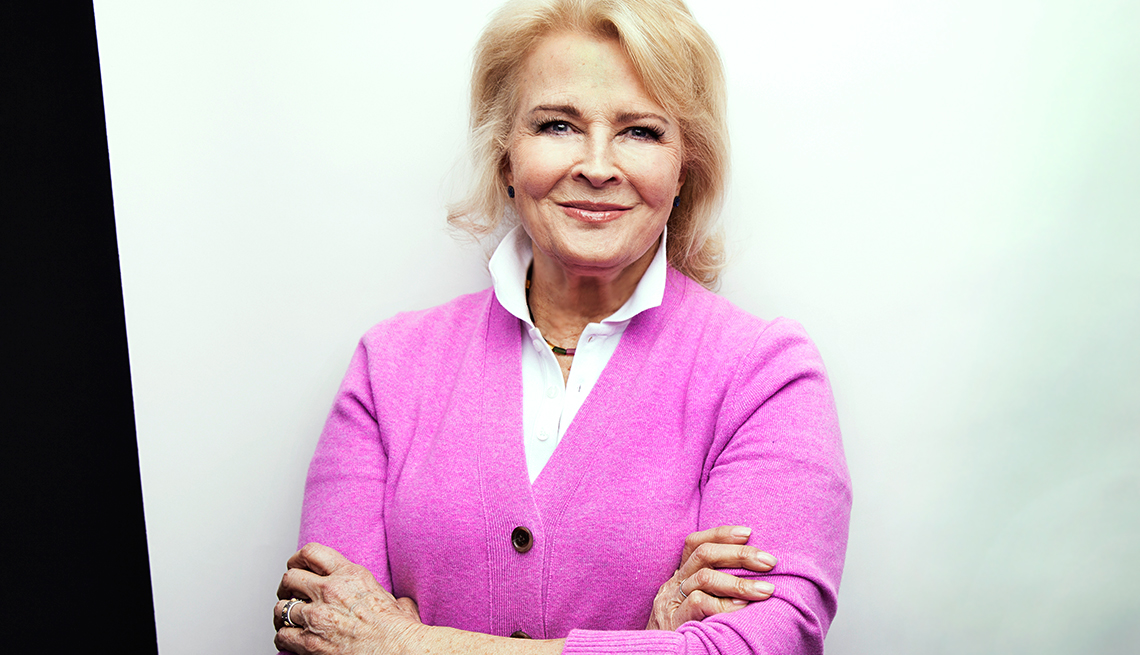 Our conversation with Candice Bergen 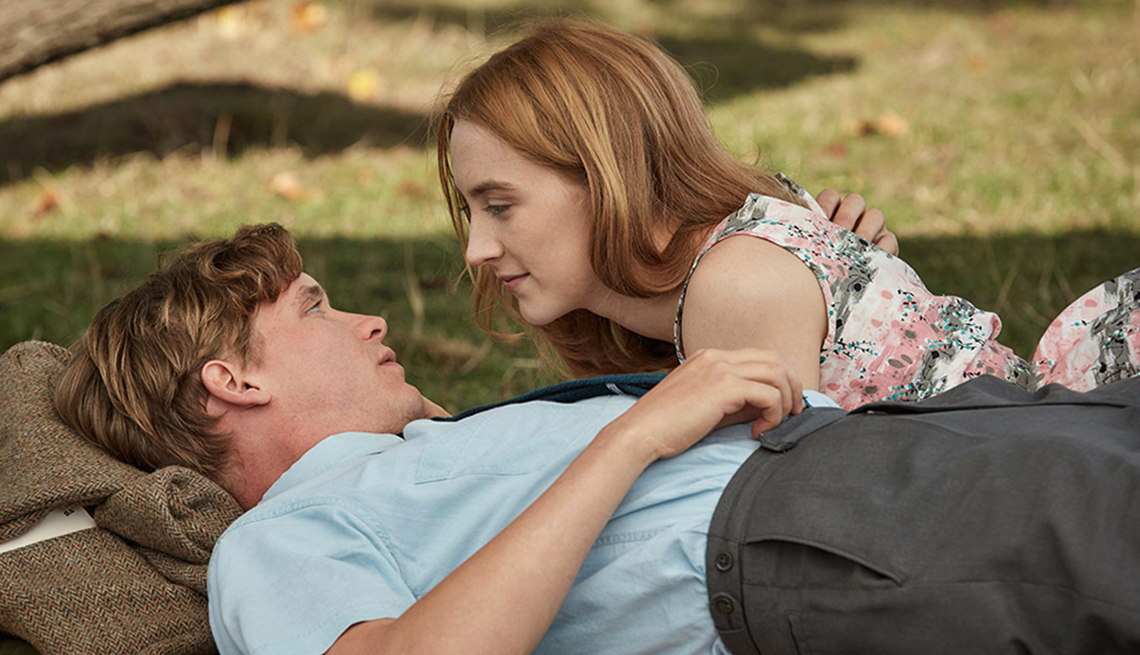 What to watch in theaters this weekend