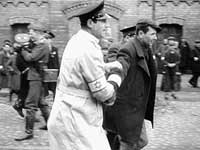 Some movies are difficult to watch because they force us to confront the brutality of others. Some are tough to sit through because they bring us face-to-face with the brute within ourselves.

And some films, like A Film Unfinished —  a new documentary that consists almost entirely of Nazi footage taken inside the notorious Jewish Ghetto of Warsaw — assault us on both levels. As Unfinished unspools, we are left to shed tears for the fate of millions of innocents — and to quietly worry about how we, as onlookers, would have responded were we on the outside of those grim walls in the years when darkness fell over Poland.

The hour of so of Nazi-filmed footage that makes up the heart of the film is not newly discovered. For decades it has been out there, generally accepted as a horrific document of life in the ghetto during the months before its imprisoned residents were shipped off to death camps in 1942. But director/screenwriter Yael Hersonski, ingeniously matching up the footage with contemporary diaries, the recollections of survivors and a more recently discovered reel of outtakes, demonstrates how the scenes were meticulously staged by the Nazis.

At first glance, the startling contrasts among the filmed segments is puzzling. As we watch footage of sumptuous parties and concerts attended by relatively prosperous Jewish detainees, it appears the Nazis are trying to suggest the ghetto residents were living in a kind of paradise. But those moments are juxtaposed by street scenes straight from Hell: starving children, homeless beggars, dead bodies huddled against storefronts — a seeming suggestion that the Jews of Europe were a burden on society, and a burden that resided just a level or so above animals, at that.

The original footage had no narration to provide direct context, but the interviews and notes collected by Hersonski clearly indicate that Hitler’s propaganda machine was working on a film that portrayed the Jewish elite as cold, self-involved who are uncaring toward the Jewish poor — who are in turn depicted as subhuman, disgusting and useless. There is no middle class in Hitler’s ghetto, just the rich, whom we are to hate, and the poor, whom we are to disdain.

With awful thoroughness, Hersonski documents how the residents were forced, under penalty of death, to participate in creating the Nazis’ visual message. Outtakes show identical scenes shot from different angles — even the grim task of loading bodies onto a cart is reenacted. Jewish policemen are clearly forced to attack a crowd whose supposed unruliness has been ordered by their Nazi overseers, fleetingly seen at the edges of the frame.

I can’t tell you I watched all of A Film Unfinished — at times I had to look away, just as the modern-day Warsaw survivors, filmed by Hersonski as they watched the old footage, are seen covering their eyes when the images and memories become too intense. But I found myself mesmerized by the few high-level shots that showed the walled ghetto — and the relatively free world of greater Warsaw outside of it. I watched the people walking those uncrowded exterior streets, passing under a jammed, rickety walkway that bridged two sections of the ghetto. The human spirit, I remembered, is capable of the most outrageous rationalizations, and one can only imagine the internal gymnastics that otherwise good people performed in Warsaw in 1942 in order to sleep at night. But then, they never saw this footage, never saw the squalor … and most importantly, perhaps, never saw the faces that in A Film Unfinished turn to the camera in virtually every street scene: accusing faces, angry faces, faces slack with the final stages of starvation.