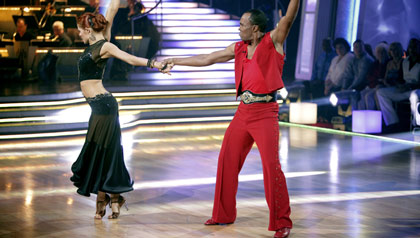 Sugar Ray Leonard, 54, dances with Anna Trebunskaya on the hit show Dancing With the Stars.

Dancing With the Stars, one of the top-rated shows on television, isn't just for the young. Ask 54-year-old Sugar Ray Leonard, who Tuesday was eliminated, or Kirstie Alley, 60, and Ralph Macchio, almost 50, who have been faring well in the first few weeks of season 12.

In fact, Leonard was filled with enthusiasm during the first few weeks of rehearsal with his professional partner, Anna Trebunskaya. "I'm going to continue to dance, ballroom dance, when this competition is long gone," he declared. "I'm going to drag my wife to the ballroom. I love this now. I know why I said yes."

Once again, DWTS is evidence that you don't have to be a sprig to trip the light fantastically. Ever since John O'Hurley, 56, waltzed across the dance floor with moves as smooth as his famous baritone, contestants who are middle-aged and up have been a strong presence on Dancing With the Stars. O'Hurley's season 1 popularity was such that when soap star Kelly Monaco came in first place, his fans cried foul. Later, O'Hurley won a live "dance-off" against his soap star rival.

Victory was clearer for peppy show business veteran Donny Osmond in season 9, when he was 51. And last season's winner, Dirty Dancing actress Jennifer Grey, 50, earned her Mirror Ball trophy with tenacity and grit, triumphing over the exhaustion, stress and pain of injuries, including a ruptured disk in her back.

Beyond the winners, there have been numerous mature DWTS contestants who've made admirable showings. Among those: George Hamilton's suave sophistication made him one of the attractions of season 2, in which he attained a respectable fifth place at age 66. Jerry Springer surprised many by faring equally well the following season at the same age. Soap star Susan Lucci took sixth at age 62 in season 7. Pixar and Cheers actor John Ratzenberger, 63, and beloved Dr. Quinn star Jane Seymour, 60, each came in sixth in their respective seasons as well.

Astronaut Buzz Aldrin drew deserved kudos simply for getting out on the floor and joining the competition at age 80, but he was never a serious contender and wound up second to last. Not so with arguably the most attention-grabbing — and oldest-ever — DWTS competitor, Cloris Leachman. The Oscar-winning original stole the show at age 82 in season 7 with such antics as sitting on judge Carrie Ann Inaba's lap, and hung in past the halfway point of the season to come in seventh place.

Leonard wanted to end up like  O'Hurley, Osmond and Grey, a winner. “I’m disappointed,” he said after the elimination show.

Still, he believes in dancing as fitness and says fitness is for everyone, at any age. He works out nearly every day. "Listen, when it's all said and done, it's your health. No matter how much money you have, fame you have, it's your health that counts most. I take care of myself. I look at myself as being a classic, like an old car — I don't know what model," Leonard says with a laugh. "I like to keep that engine purring."