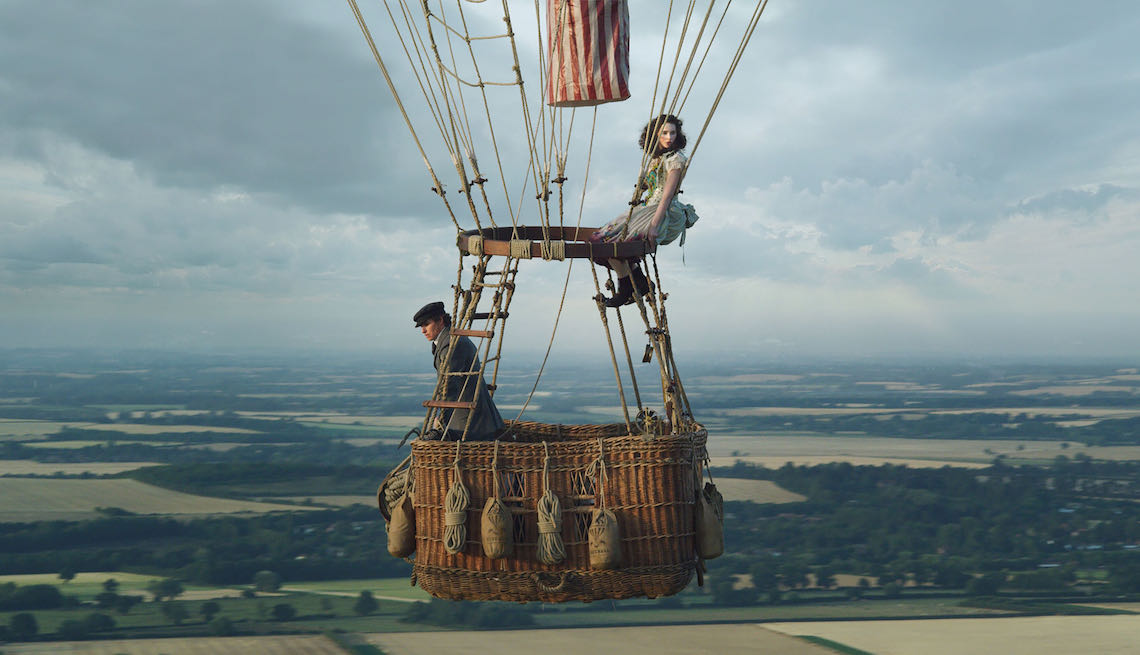 En español | The Aeronauts isn't really historically accurate, but it does give you the most vivid sense imaginable for what it felt like to be British meteorological adventurers James Glaisher, then 53, and Henry Coxwell, 43, who barely escaped death in 1862 when they were the first humans to ride a hot-air balloon seven miles above the earth, where jets fly today and the air is minus 22 degrees.

They had a smashing view — but Glaisher, making scientific notes about his skin turning funny colors, began to pass out from altitude sickness and tried to yell to Coxwell, only to discover that his mouth, arms and head wouldn't move, and his mind was freezing up, too.

Thereby hangs a nail-biter of a tale, and director Tom Harper makes it a whooshing, pulse-pounding experience. Harper, whose recent Wild Rose is a must-see hit about a fiery Scottish singer, swaps out Coxwell for an imaginary, rich female aeronaut named Amelia Wren (Felicity Jones), with her The Theory of Everything star Eddie Redmayne as Glaisher.

Jones’ character is inspired by French balloonist Sophie Blanchard, who favored elaborate costumes, plumed hats and nighttime flights with fireworks — which, unfortunately, ignited her balloon in 1819, killing her in a blaze of glory as she fell to earth, her white dress fluttering like angel wings.

Other things happen to Amelia, whose flair for drama deepens the film's period-picture grandeur and plays well against Redmayne's nerdy scientist role. She does cartwheels to wow the crowd at their fateful launch as Glaisher, intent on using his various instruments to learn to predict the weather, shows more interest in the gizmos and pigeons he packs into their perilous basket.

She tosses a dog out from 100 feet up, the crowd gasps — then the pooch's parachute opens and they laugh. Exciting sights, superb sound design and spectacular drama ensue.

Unfortunately, the story keeps flashing back to the earthbound lives of the balloonatics. He's got one loyal friend (Yesterday's Himesh Patel, whose talent is wasted on a one-note role with dull dialogue) and a science academy full of upper-class twits who razz him for believing in the future of weather reports and flying men.

Legendary Tom Courtenay, 82, plays his dementia-afflicted father whose cognition comes and goes. It's a touching performance, but the relationship feels tacked on to the story.

Amelia's flashbacks involve her late husband (Vincent Perez, 55), who died in a ballooning accident that still messes with her irrationally guilty mind, as well as her traditionalist sister (Phoebe Fox), who thinks this aeronaut business is all nonsense and not fit for a proper lady. Their scenes fall to earth like the pigeon Glaisher sets free to fly at a great, inspiring height, only to watch in horror as it plunges like a rock. (That part really happened in 1862.)

But the aerial scenes that dominate the film do soar in wonderful ways, and there's real tension as dangers mount, tempers fray, fingers fumble, minds fade and ice relentlessly embraces the balloon and its pilots.

It might have worked better to have them fall in love as they ascend to scary areas with clouds like mountains — since Amelia isn't real, why not? — but their quarrelsome-pal bonding works OK in dramatic terms, and these two retain the chemistry that made their Stephen Hawking film beloved.

Jones is a beauty of rare intelligence and magnetism, and somebody should cast her in a great big action hit with her at its center. This isn't quite it, but it isn't half bad. It's in theaters for a couple weeks, and then streams on Amazon. If I were you, I'd watch it on a big screen while I had the chance.