How is it possible that the summer's most delightful rom-com for adults slips in on Labor Day weekend pairing one-time A-listers Keanu Reeves and Winona Ryder? Prepare to be surprised by this tart, funny, awkwardly sexy comedy about two not-so-lovable losers — Frank and Lindsay — who drag themselves to California's Paso Robles for the destination wedding of his despised half brother. She's attending even though the groom dumped her six years earlier; she's still an emotional mess seeking “closure."

The low-key cross between Sideways and Before Sunrise proves to be a fine fit for Reeves (53) and Ryder (46), who've previously costarred in Bram Stoker's Dracula and A Scanner Darkly. The two display their combustible love-hate chemistry from the meet-cute. While waiting at a Los Angeles airport for a puddle-jumper, Frank and Lindsay immediately cross each other in the tense environment outside the boarding gate. Despite his casual opening compliment — “nice dress” — she immediately overshares her neurosis (think Sandy Dennis circa The Out of Towners). When he steps forward to escape her, she goes ballistic with a very personal tirade about how he's trying to cut in line.

When the hilarious opening fades, it dawns that this may not be the expected late-summer movie dump after all. Can 57-year-old writer-director Victor Levin (5 to 7) sustain the bristly banter until the final credits — and give Reeves-Ryder the material they deserve?

The answer, with some reservations and reasonable expectations, turns out to be yes.

What Frank and Lindsay have in common is that they both wish they were anywhere but there. They aren't alone in their hatred of expensive destination ceremonies, and this ordeal by bride and groom alone will connect with audiences who've spent too much money on couples with whom they'd hardly share appetizers at Red Lobster. 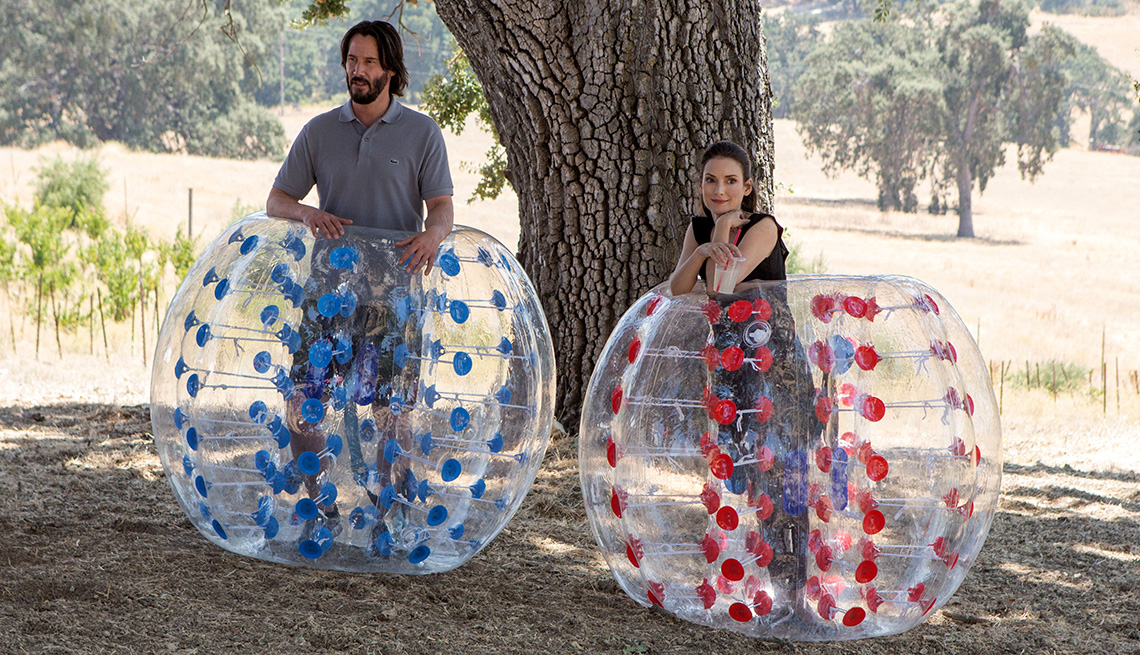 Keanu Reeves and Winona Ryder are back together again, annoying and romancing one another.

Thrown together at the rehearsal dinner, grabbing a freebie foot massage and schlepping to the sunset nuptials in a vineyard, the pair become each other's wedding lifeboat. At the reception, he asks her to dance. She refuses. This rejection makes him no unhappier than the emotional crater he already is. He's a veteran of family dysfunction, which he expresses in vile and hilarious opinions of his half brother, mother and stepfather in a deadpan worthy of Charles Grodin.

A talky al fresco sex scene on a mountaintop during the reception boils over into farce. But, while the movie threatens to jump the shark, it doesn't. Levin has written scene after scene of sharp, funny dialogue that plays to the strengths of Reeves and Ryder without pushing them out of their comfort zones. They've always been better stars than actors — and this oddball romantic comedy will have audiences falling for them all over again.