The character at the center of this dark new comedy is a train wreck.

No wonder we can't tear our eyes away.

Indeed, for 94 minutes Woody Harrelson pulls off the ultimate actor's magic trick: He gets in our faces and annoys us no end, leaving us breathless for more.

Wilson is based on a graphic novel — a series of comic strips, actually — by Daniel Clowes (Ghost World), who also wrote the screenplay. His Wilson is a singular sort: desperately lonely yet disdainful of people, nakedly neurotic yet delusionally condescending.

"My wife left me," he tells a flummoxed date, played by a too-briefly-seen Margo Martindale. "I need to find someone new — not you, necessarily." He's the type of guy who strikes up a probing conversation with the unfortunate stranger standing at the neighboring urinal, or sits right beside the only other passenger on a train car.

Is Wilson genuinely interested in making a connection, or is he merely pushing people's buttons? A bit of both, perhaps. It's all seat-squirmingly hilarious as director Craig Johnson's large cast of just-passing-through characters move from courtesy to curiosity to repulsion as Wilson's self-absorbed shadow passes over them.

Wilson's life is as scattershot as his social skills. He lives alone in a ramshackle apartment, pouring oddball affection into his dog, Pepper. Then, by sheer chance, Wilson's empty life fills with meaning: He learns that his ex-wife, Pippi (Laura Dern), neglected to tell him she was pregnant when they divorced 17 years ago. Pippi gave the baby, named Claire, up for adoption, and now Wilson has managed to find out where she lives. 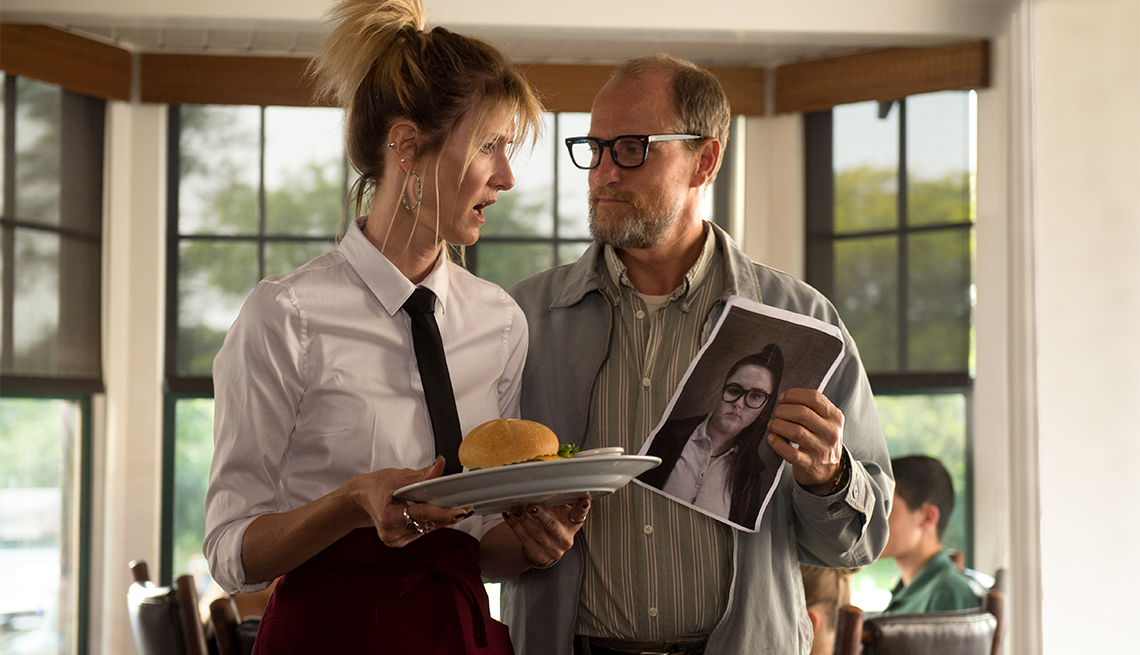 Laura Dern and Woody Harrelson in "Wilson," a comedy about a desperately lonely, nakedly neurotic yet delusionally condescending protagonist

Wilson railroads Pippi into joining him on his mission to see Claire in the flesh. It all goes south rather quickly. After an epically awkward introduction, the girl (a wonderfully deadpan Isabella Amara) slowly warms to her bonus set of parents. But the wildly impulsive Wilson underestimates the resolve of Claire's parents to keep him away. His blindness to personal boundaries lands him in an orange jumpsuit at the state pen, where his unorthodox interpersonal skills have predictably disastrous results. Still, Wilson remains fiercely determined not to lose this last chance (as he sees it) to imbue his life with significance.

As you've gathered, Wilson is something of a shaggy-dog story: It rambles from one locale to the next, subjecting its antihero to one self-induced indignity after another. But Harrelson's Wilson forges ahead, looking agog at the world through his Coke-bottle glasses, his monumental cluelessness precipitating astonishment when the worst inevitably befalls him.

The fact is, Wilson should be an insufferable companion. But Harrelson, one of the screen's most gifted actors, always finds a way to make us laugh at his character's closed loop of yearning/striving/failing, even as we ache for him.

Not that Wilson would care how we feel.