Playing an avenging mom named Mildred in the Fargo-like (but darker) Three Billboards Outside Ebbing, Missouri, Frances McDormand gives a performance that may well win her a second Oscar (her first was for Fargo in 1997).

After her teen daughter is murdered (in a brief, elliptical flashback), Mildred rents three billboards from Ebbing's Flannery O'Connor-reading local weirdo Red Welby (Caleb Landry Jones, a rising star who also appears in Oscar frontrunners Get Out and The Florida Project) to send this accusatory message: "Raped While Dying. Still No Arrests? How Come, Chief Willoughby?" Actually, Willoughby (Woody Harrelson, 56) is a nice, effective police chief who tried hard to crack the case and strives to keep his crazy townsfolk from each others' throats. But Mildred is the honey badger of grief: She doesn't give a fig what gets in her way. She wins our sympathy, then relentlessly tests it by attacking with sucker punches, clever invective, dental tools, fire, kicks to teenage groins, and a mouth foul as David Mamet with a hammer-smashed thumb. When the chief tells her he's dying and asks her to erase the billboards, she snaps, “They wouldn’t be so effective after you croak, right?” She dresses like Rosie the Riveter after she stomped Rambo and stole his head scarf, but McDormand's infinitely skillful performance blending jokes and fathomless horror steals our hearts. As we learn the reason for her guilt as well as her bereavement, she doesn't even seem so crazy anymore.

Mildred is a sister to the nasty, perversely kind, hyper-verbal gangsters seen in Billboards director Martin McDonagh's earlier black comedy In Bruges, only she's sharp, and grief gives her total moral cred. Everyone in this movie is a little cartoonish, yet their pain is palpable even as their antics and wit crack us up. Despite clever dialogue delivered by the best actors around, you can't simply laugh at anybody in Ebbing. Take Willoughby's underling Officer Dixon (Sam Rockwell, 49, in a breakout role), an ignorant hothead who lives with his smarter but reptilian racist mom (Big Love's Sandy Martin, 67). When Mildred taunts him for being in the black-suspect-torturing business, Dixon snaps, “That’s the 'person-of-color-torturing business' these days.” Resentful, impulsive, mom-dominated and appalling as he is, he really wants to solve crimes, and he gets nagging suspicions about the case, which he follows up with cunning, reckless ingenuity. And when Dixon throws someone out a window, there's a perfectly reasonable emotional explanation that makes sense, propels the plot and makes imaginary Ebbing seem real. 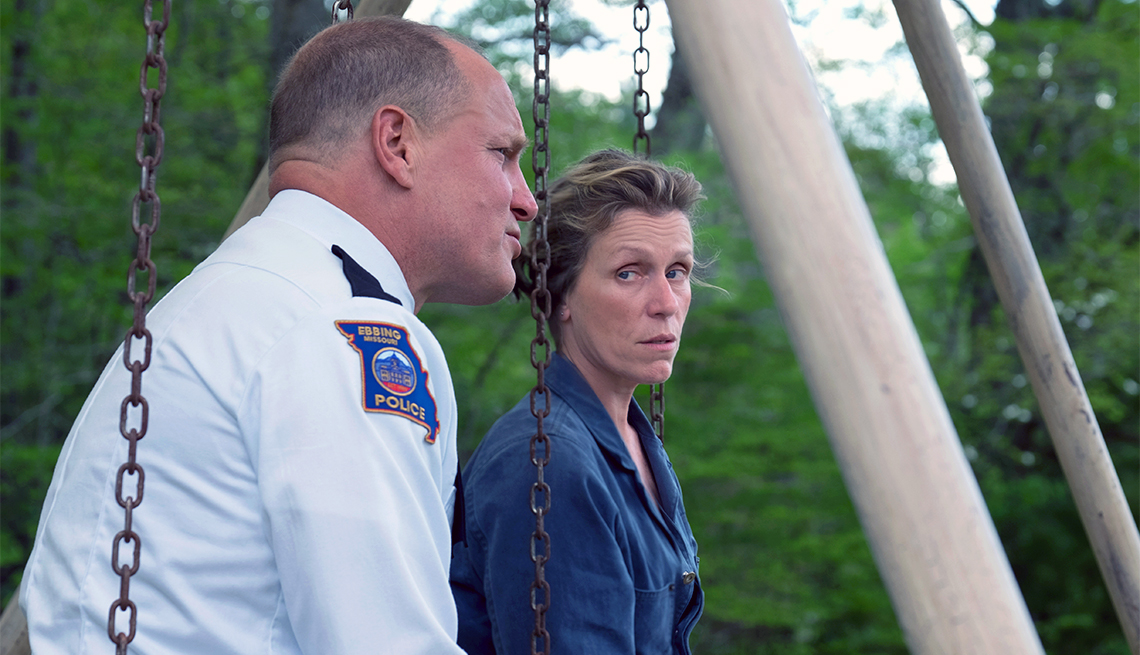 So why is McDormand a shoo-in for an Oscar nod?

1. There has never been a better time for a woman-centric movie, especially one about a smart, angry woman. Suddenly, the zeitgeist-shaking entertainments are feminist: Margaret Atwood's The Handmaid's Tale and Alias Grace rule TV, and peeved or strong female characters (many over 50) will win big in this year's award races in films like I, Tonya; The Shape of Water; Victoria and Abdul; Novitiate ;and Lady Bird — the latter two directed by women. For years, Julia Roberts' movie grosses correlated with how many minutes her character smiles, and McDormand is the least smiley of actresses. But even Mildred's furious scowl won't hurt the film's earnings and Oscar mojo. Not now, when Hollywood is reeling from sexual harassment accusations involving the highest levels of moviemakers. For a monomaniac on a mission, Mildred has a rich, realistic emotional life with her snappish son (Lucas Hedges in a role like his 2016 Oscar winner Manchester by the Sea), her late daughter in flashback, and her short, sweet suitor (Peter Dinklage, 48). If they made more movies about women this interesting, Hollywood would make more money.

2. It's McDormand's year. She's a better actress than ever at 60, and after 25 honors (mostly nominations) for top awards (Oscar, Emmy, Golden Globe and more), this startlingly original movie could provide the second Oscar win she's waited for. And her reputation for incorruptibly focusing on great work instead of her reputation itself will be the biggest reputation booster of all.

3. Three Billboards benefits from anti-police anger without dehumanizing cops. Though conservative film critics are correct to see a liberal slant in the movie, it was written long before Ferguson, Mo., became famous for black protests of police action. The movie manages to mock its racist cop without making him the bad guy — he's a dumb guy who might overcome his evil mom's influence. Still, some liberal Oscar voters will vote for the film or McDormand as a blow for Black Lives Matter, while conservatives may like the fact that the film makes the cops sympathetic characters we can't help but like.

4. It's already winning the awards that predict the Oscars. It's still early in the race, but the film unexpectedly won the Toronto Film Festival People's Choice Award, which led to the best picture Oscar in four of nine recent cases. However, it's more likely McDormand will win for her performance than the movie will for best picture. The flick won best screenplay and a best film nomination at the influential Venice festival, and 11 British Film Independent Award nominations.