Steven Spielberg doesn’t like to sit around. So while he was working on computer graphic effects for Jurassic Park, he also made Schindler’s List. And while awaiting CG on his forthcoming sci-fi epic, Ready Player One, he made another ideological heroism film, The Post, in a matter of months. Meant as a pointed defense of the press and a rebuke to its current critics, it’s a solidly entertaining, rather didactic account of the 1971 Pentagon Papers case.

You remember: Daniel Ellsberg (Matthew Rhys), a government think tank intellectual working on Vietnam, was outraged that officials like Defense Secretary Robert McNamara told the public the war was going great guns, then privately confessed that it was an unwinnable calamity — and President Nixon was expanding the war. When few people had Xerox machines, Ellsberg found one and spent months photocopying McNamara’s top-secret 7,000-page report on the public lies four presidents told to avoid admitting catastrophic failure.

Nixon stopped the New York Times after it published the first part of the embarrassing secret history, and the Washington Post scented the story of a lifetime and joined the fray. Soon, with the help of many other newspapers and the Supreme Court, the historic attempt to shut down the press was thwarted — for a time.

Writers Liz Hannah and Josh Singer (who dramatized the Boston Globe’s bust of pedophiles in the Oscar-winning Spotlight) do a fair-to-middling job of spinning history into saga. But it’s a tougher lift than depicting Globe gumshoes hunting abusive priests. The issues are more abstract than underage rape, requiring a few too many talky, preachy passages about the history of the war and the importance of the press in checking potential tyrants. The film includes plenty of rich detail about the newspaper business in the legendary era of hot type and cries of "Stop the presses!" But the process of the reporting is much less prominent than in Spotlight or the Watergate classic All the President’s Men. 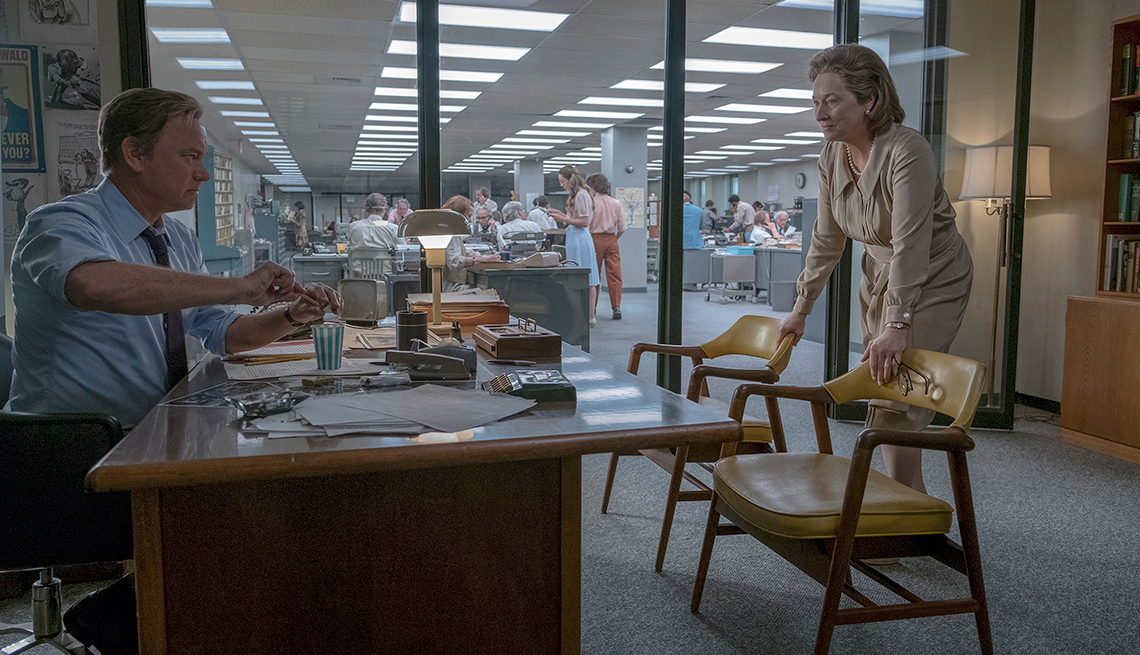 Tom Hanks plays the editor of "The Washington Post," and Meryl Streep is the publisher in Steven Spielberg's "The Post."

The film shifts the focus from Washington Post sleuths to the editor, Ben Bradlee (Tom Hanks), and publisher, Katharine Graham (Meryl Streep), the mousy widow whose husband committed suicide, forcing her to run the newspaper despite a pack of mostly sexist-pig advisers who think she’s not man enough for the job. This is an opinion she seems to share, being the very incarnation of self-doubt.

What’s worse, the Pentagon Papers crisis came precisely when the Post, then a perennial distant second (if that) to the New York Times, was forced to go public in a stock offering whose value depended on no crises. If Nixon won in court, Bradlee and Graham could have gone to prison and the paper would be out of business. Even her most supportive adviser (played by Tracy Letts, 52, a standout in three 2017 prestige films: The Post, Lady Bird and The Lovers) warns her to cave and survive. She also must confront her dear old friend McNamara, whose reputation the Pentagon Papers skewered. Graham’s devotion to truth could have cost her everything: freedom, power, money, friends.

While there are pulse-pounding thrills in the film, as when ace investigative assistant managing editor Ben Bagdikian (Bob Odenkirk) tracks Ellsberg down to get the story before the president can end American journalism forever, that’s secondary to the drama of Streep’s vacillating Graham and her growling bulldog of a top editor. These two old pros know how to play this acting game, and Hanks is too smart to merely channel Jason Robards’ definitive Oscar-winning performance in the same role. In fact, he modeled his performance on Bradlee himself, whom Hanks knew a bit. (Ironically, the new HBO Bradlee documentary The Newspaperman reveals that the editor incorporated some of Robards’ gestures after the film made him, Graham and the Post global icons — so it may be that some of Robards crept into Hanks via Bradlee himself.)

The Post is pretty darn good, even though it’s not the best Oscar-magnet work that Spielberg, Hanks and Streep have done. These three at their second-best are still better than practically anyone else’s best effort. The themes of press versus government and sexists versus women could not be timelier. Most fans of the film will fall left of the political center, but even those who think revealers of government secrets belong in jail will have to grant that Spielberg knows how to make a movie that punches emotional buttons. And the guy works fast.