Sixty years of myths surrounding the early days of McDonald's go up in griddle smoke in The Founder, a thoroughly entertaining — and inevitably infuriating — look at how burger impresario Ray Kroc co-opted the ideas of two enterprising brothers, gave them the bum's rush out of their own company and finally robbed them of tens of millions of dollars.

When we meet middle-aged Kroc (Michael Keaton), it's the 1950s and he's struggling as a salesman of milkshake machines. If he washes out, it will be the latest in a lifelong series of professional failures. But then he stumbles on brothers Dick and Mac McDonald (Nick Offerman and John Carroll Lynch), whose self-designed fast-food restaurant has become the sensation of San Bernardino, California.

Weirdly, the sight of the brothers' young employees churning out perfect hamburgers, shakes and fries on an elaborate and balletic assembly line unleashes the soul of a visionary in Kroc. Struck by the notion of McDonald's burger joints (complete with golden arches, designed by brother Dick) popping up on street corners from sea to shining sea, he talks the reluctant pair into letting him launch a franchise business.

The results are spectacular, but Kroc's success cannot outpace his ambition. Before long he has muscled the brothers out, dispensed with the wife who stuck with him through the lean years (Laura Dern) and taken on a new one (Linda Cardellini) to see him through the fat ones.

The wonder of Keaton's performance lies in his ability to make us empathize with sad-sack Kroc in the early going, then despise him toward the end as he drops into life's deep fryer everyone who helped him succeed. So incremental is Keaton's metamorphosis that I couldn't tell you precisely when he turns to the Dark Side. But make no mistake: At some point we realize his best-buddy smile has morphed into that of a crocodile sizing up a stray goat on a muddy shore. 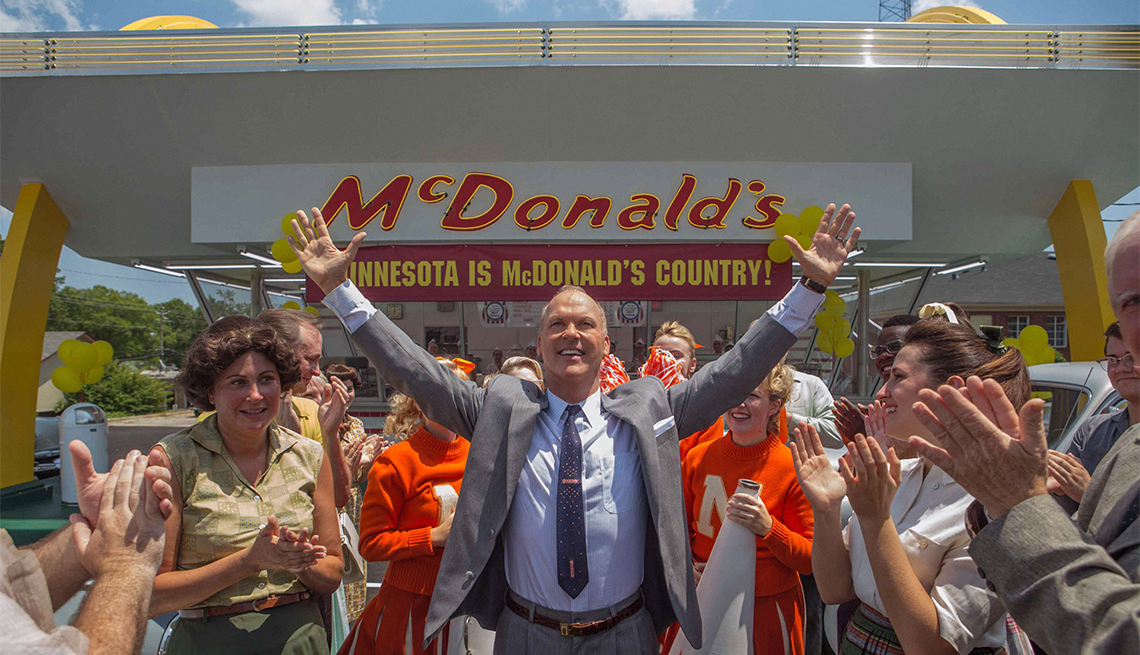 Standing in stark contrast to Kroc's bullying and blind ambition are the brothers McDonald. They are kind to a fault and steadfastly loyal, without a shade of guile. Director John Lee Hancock unfolds their story with obvious affection; yes, they dream of success, yet that dream resides within a framework of modest proportions. They want to devise the most efficient way to make and sell hamburgers, but they are motivated by nothing more than the desire to please their local customers — and to enjoy each other's company. It's not that they spurn the holy grail of market domination, it's simply that they've never even considered it.

As played by Offerman and Lynch, the McDonalds are a supremely pleasing pair. They complement each other professionally (Dick is the prophet, Mac the pragmatist) and even finish each other's sentences. Their affection for one another is so genuine that even when they disagree about letting Kroc the wolf inside their henhouse, they ultimately relent because each brother wants the other to succeed.

In the end, Kroc crushes the brothers like stale hamburger buns, even while cushioning their ouster with checks for more than $1 million each — a staggering amount of money in 1961. But he weasels out of a handshake pledge to give them a percentage of the company's profits. And in a final act of pettiness, Kroc opens a McDonald's near the brothers' original store, putting them out of business for good.

The losers, however, are not the McDonald brothers. Hancock lets them slip away within the film's narrative, implicitly reassuring us they are happiest in each other's company, business setbacks or no.

Instead we're left with a final look at Kroc in the 1970s, tooling around his mansion, fussed over by his trophy wife, practicing a speech in which he repeats his now-famous late-life assertions of being a self-made man. (Kroc even claimed to have picked the McDonald's name out of thin air.) The founder may be the picture of what America calls success, but Keaton's eyes tell another story — that of a poverty impervious to wealth.