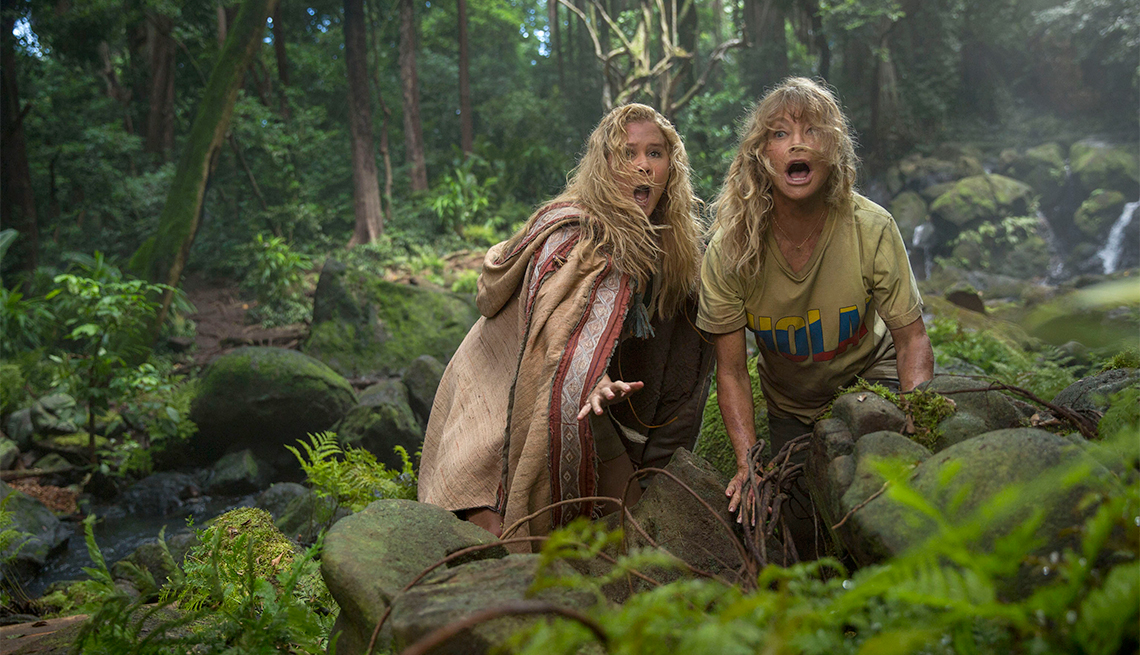 The best thing about Snatched? It snatches a still-adorable Goldie Hawn, 71, from the jaws of retirement after a 15-year movie drought — reminding us why we cooed over this bubbly funny lady in Private Benjamin, Overboard and The First Wives Club.

The biggest problem with Snatched? It turns Hawn into a too-tame second banana to younger costar Amy Schumer. And the film itself is an underdone farcical variation on the "vacation from hell" theme, combined with the mother-and-daughter-coming-to-terms scenario.

Casting a hot young performer opposite a veteran has been a common Hollywood ploy ever since Wallace Beery teamed with 9-year-old Jackie Cooper in 1931's The Champ. It worked for Jane Fonda, then 67, in Monster-in-Law (2005), when she made a comeback after her own 15-year hiatus. That movie earned far lousier reviews than Snatched, but the combustible multigenerational pairing of Fonda and Jennifer Lopez propelled the matrimonial comedy to $155 million in ticket sales right around Mother's Day.

Snatched follows that playbook, including its holiday-friendly release. And Schumer, in her first movie since her 2015 hit Trainwreck, is far more expert in the laugh-provoking department than J-Lo could ever be, thanks to her cutting-edge brand of self-humiliation, desperation and sexual brazenness.

The opening scene amusingly establishes Schumer's Emily as the most inept retail clerk ever, pestering a customer for apparel advice for her upcoming prepaid trip to an Ecuadorean resort. She is swiftly fired after (oops!) forgetting to ask for time off. Then she gets unceremoniously dumped by her fame-seeking rocker boyfriend, who would rather take advantage of his growing coterie of groupies than go off on a romantic South American getaway.

In order to "put the fun back in nonrefundable," the self-absorbed Emily guilts her divorced mother, Linda (Hawn), into leaving behind her cats, clay-modeling class and man-child geek of a live-in son, Jeffrey (Ike Barinholtz), and join her on a jungle adventure.

The trip, of course, does not go as planned. Mom and daughter are abducted by a gang of native thugs (portrayed with a dismaying lack of racial sensitivity) and held for ransom. Somehow they summon their inner survival instincts and repeatedly elude their captors — and Emily proves to have the lethal goods to dispatch baddies with a shovel and a harpoon gun.

At one point, Emily digs up her mom's scrapbook, full of fun-loving real photos of young Goldie — which remind us that she's always been best as the life of the party, rather than the wallflower homebody she plays in Snatched. Hawn does as well as she can with this rather forlorn enabler of her emotionally stunted children. But I kept waiting for the movie to reawaken Linda's — and Hawn's — dormant vibrancy to greater effect. At least the script by Katie Dippold (The Heat, the female Ghostbusters) allows the Oscar winner one bring-down-the-house spit-take.

And I chuckled often enough to get some pleasure out of this fast-paced 90-minute comedy. If you are keen on seeing this mildly crude romp for Mother's Day, by all means go.