No Hollywood family has earned more Oscar glory than the Coppolas, and Sofia Coppola’s new movie, The Beguiled, made her the second woman in history to win Best Director at the Cannes Film Festival this year. It’s certainly Oscar bait, for both director and star Nicole Kidman, and it’s the most beguiling art film of the summer and Coppola’s second-best movie, after Lost in Translation.

As Miss Farnsworth (Kidman) tends her seminary for young ladies on a hushed Virginia plantation weighed down by Spanish moss, the Civil War rages all around, unseen but heard like a distant rumbling rumor. That’s nothing compared to what rages in the hearts of the ladies — especially the melancholy romantic (Kirsten Dunst) and the brooding bad-girl teen (Elle Fanning) — when they rescue a severely wounded, insanely handsome Union soldier (Colin Farrell).

If this were her dad Francis Ford Coppola’s film (or Don Siegel’s nicely lurid 1971 version of The Beguiled starring Clint Eastwood), you might expect a sex-and-gore story. But like her mom Eleanor Coppola (whose feature debut, Paris Can Wait, screens with Sofia’s flick at the Munich Film Festival), Sofia conceals intense emotions beneath an ultracivilized surface. Giggling over their tumultuous feelings, ogling Farrell’s hypermasculine eyebrows, the seminarians struggle to reconcile Rebel patriotism, Christian charity, mortal fear and altogether unladylike lust. 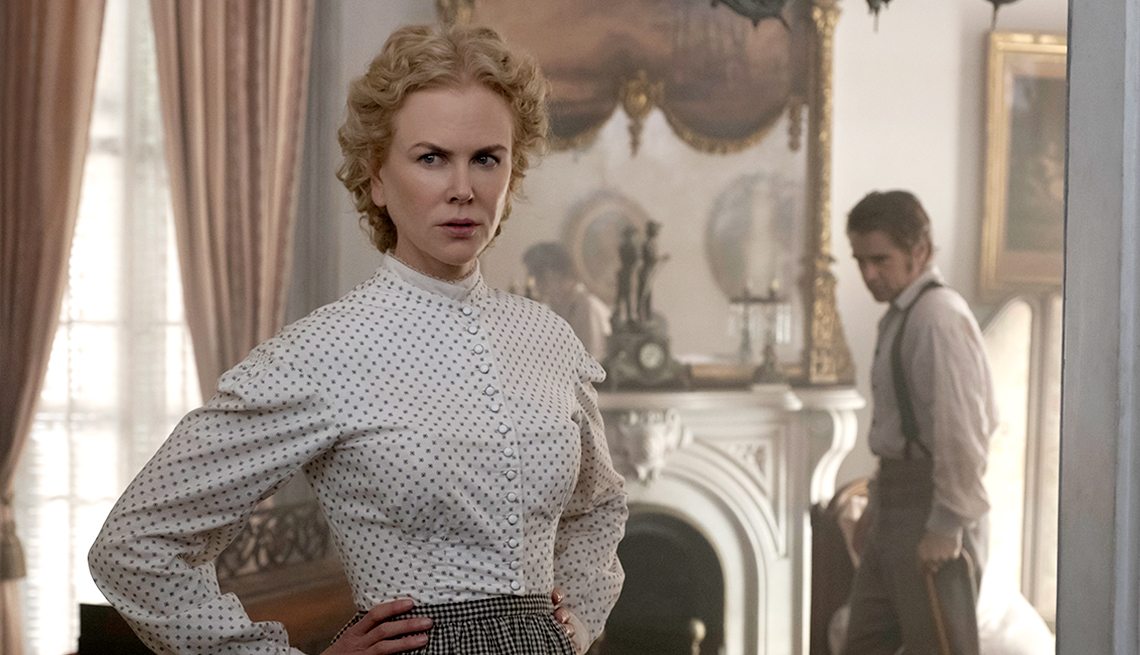 Nicole Kidman and Colin Farrell star as a headmistress and the intruder who threatens her world in "The Beguiled."

In flattering, flickering candlelight conjured by cinematographer Philippe Le Sourd, whose muted work echoes Kubrick’s Barry Lyndon and The Godfather’s famous dark palette, a highly civil war is fought around the dinner table, within each pulsing heart and among the rivalrous women desiring Farrell against their principles. When Fanning brags about her cooking, telling Farrell, “I hope you like apple pie!” we feel the subtext. Few films even try to evoke the Female Gaze the way Coppolas — Sofia and Eleanor — do. It’s not about the man, it’s about the shared inner world of the women, conveyed through shooting glances and cutting words.

Kidman is as ruthless and vulnerable as we’ve ever seen her. When she bathes the unconscious soldier, her punctiliously proper fingers lose their nerve as they delve southward, but it’s not played for laughs. Her desire is serious, her propriety more so. Her eyes turn cold and calculating when they have to because the soldier’s untamed emotions are a bomb that could blow them all to smithereens. Farrell plays him as a half-calculating Irish charmer, wooing each girl or woman with whatever flavor of blarney works. But he’s also helpless before his own eruptive passions, and it’s not hard to see who’s going to win his duel with Miss Farnsworth. In this house, nobody gets away with so much as an erroneous Latin declension.

On the other hand, the eerily talented Fanning’s teen is clearly destined to be out of control, and given the right guy, Dunst’s tightly wound outfit yearns to burst and rain its buttons like impeccable marbles on the plantation floor.

What shall prevail, licentiousness or virtue? Murder or nursing? North or South? It’s all up to Miss Farnsworth, who turns out to be the smartest civil warrior on the battlefield of the human heart.