Bryan Cranston disappears into yet another character in The Infiltrator, the nerve-rackingly taut true story of a federal agent who managed to crack the most notorious cocaine cartel of the 1980s.

Fresh off his Oscar-nominated (and Movies for Grownups Award-winning) turn in Trumbo, Cranston once again assumes the role of a real-life guy juggling professional passion and devotion to family. As persecuted novelist Dalton Trumbo, his worst fear was that a congressional committee might throw him in prison; here it's that a drug lord might throw his severed head in Biscayne Bay.

Cranston plays Robert Mazur, a veteran U.S. Customs undercover detective with an uncanny knack for gaining the confidence of bad guys. A sting gone bad in the opening scene makes him eligible for retirement — a notion that entices his long-suffering wife, Evelyn (Juliet Aubrey, poignantly playing a woman trying to live a normal life on the cutting edge of dread).

But there's at least one more target in Mazur's sights: Colombian drug kingpin Pablo Escobar — or at least his U.S. money-laundering operation, whose tentacles stretch far beyond its Florida hub. Posing as a crooked banker, Mazur gives himself a new name — one he spotted on a random tombstone, reminding us how much simpler undercover work was in the days before the internet knew all. After a few bloodcurdling, trust-winning exercises — including a grisly encounter with a chicken-slaughtering Santeria priest — Mazur is in like Flynn: Not only does he gain the confidence of Escobar's U.S. operatives, he becomes one of their closest personal friends. 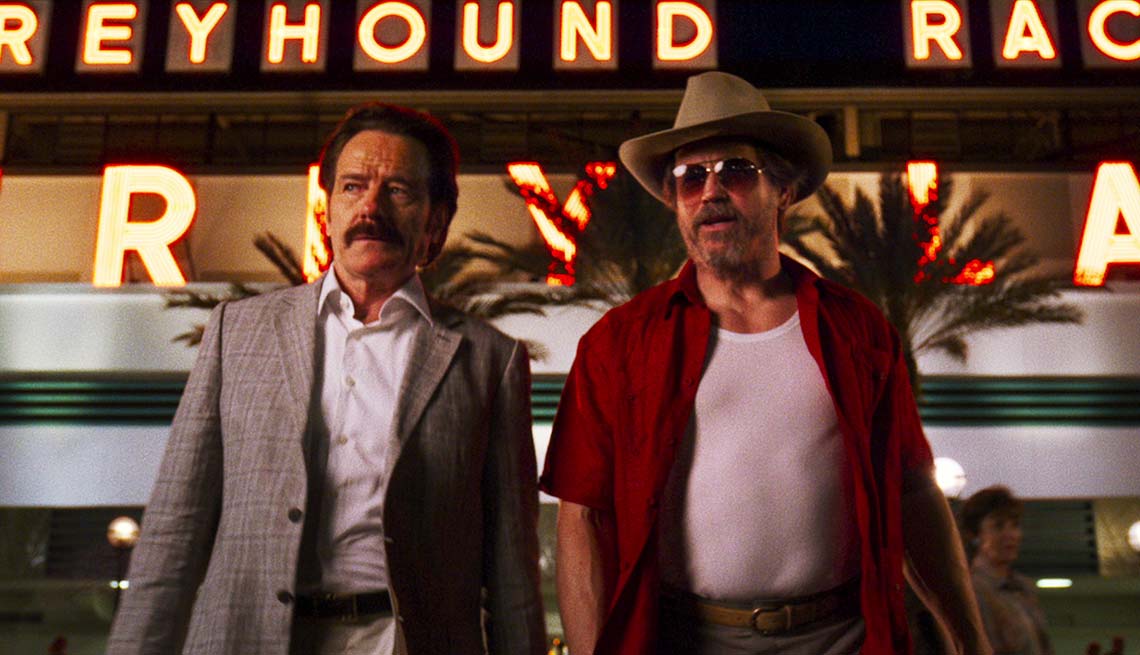 Bryan Cranston, left, and Michael Pare in "The Infiltrator"

Tense as those encounters are, The Infiltrator turns positively chilling when Mazur's professional and personal worlds swing into perilously propinquitous orbit. A scene in which an Escobar confidant happens upon Mazur and his wife enjoying an anniversary dinner — his cover story portrays him as single — quickly morphs into the most unnerving restaurant run-in since Joe Pesci asked Ray Liotta, "What do you mean I'm funny?" in Goodfellas.

A superb cast helps director Brad Furman (The Lincoln Lawyer) ratchet up the tension. As Mazur's undercover partner, John Leguizamo (Chef) gives a powerful performance as a guy whose machismo can barely conceal his mounting apprehension that the entire operation is about to go south. And Olympia Dukakis (Moonstruck) has great fun as Mazur's aunt, a mob matron who respects her nephew's law-abiding career choices but would prefer that he join the family business.

Benjamin Bratt nearly steals the show as Roberto Alcaino, Escobar's top American proxy. This soft-spoken, sweet-natured family man forges with Mazur a warm friendship that we know can end only badly. And when the final accounting arrives, we can practically taste both men's sense of betrayal and regret.

Most of all, The Infiltrator is a stirring account of how one country found within itself the resources and the resolve to beat back the drug scourge once and for all. (Oh, wait …)