If there is an original idea in its ugly little head, Suicide Squad conceals it better than Batman hides his cave.

Shamelessly cribbing from better films right through to its virtually plagiarized conclusion, the latest entry in the DC Comics movie canon bores even itself. Its central characters sleepwalk through the muddy action and laconically relate their backstories — an endless biographical litany so dull that, in comparison, The Canterbury Tales would read like a collection of People magazine blurbs.

The premise is pretty hoary to begin with: A ragtag collection of imprisoned bad guys is forced into service as a secret U.S. government task force to do battle with villains who are even worse than they are (cough — The Dirty Dozen — cough). We meet them in the most unimaginative and static setting possible: A creepy U.S. security official named Amanda Waller (Viola Davis) sits across a table from some military brass and talks about them. Talks about them!

There are too many Suicide Squad team members to focus on here; we're mostly interested in Will Smith, who manages to bring his signature charm to the role of Deadshot, the world's most accurate assassin. Smith has lost none of his not-so-bad-boy swagger, and he's so darn likable that at times we find ourselves rooting for him to escape not only the villain but this awful movie as well.

As a normal human with extraordinary talent, Deadshot is also one of the few characters we want to connect with on any level. The rest are, for the most part, stand-ins for superhero stereotypes: There's the big ugly Hulk guy (Adewale Akinnuoye-Agbaje, who really should shorten his professional name to "Triple A," as Killer Croc); a Human Torch wannabe (Jay Hernandez, as Diablo); a kick-butt Kill Bill/Lucy Liu swordswoman (Karen Fukuhara as Katana) and a Captain America-like leader (Joel Kinnaman as Rick Flag). I must say Captain Boomerang (Australian actor Jai Courtney) is the first boomerang-wielding superhero I've seen, but his skills are no keener than those of the feral Boomerang Kid who helped take out the bad guys in Mad Max 2: The Road Warrior.

Two familiar faces make major appearances in Suicide Squad: Batman's nemesis the Joker (Jared Leto) and his main squeeze, the cheerfully insane Harley Quinn (Margot Robbie). She's an unwilling member of the squad; he's determined to liberate her. The understated, poker-faced Leto suffers from comparison to Heath Ledger, who redefined the role so thoroughly in The Dark Knight, and to Jack Nicholson, who stole the show from Michael Keaton in Batman. It doesn't help that in one pivotal scene Leto shows up in white tie and tails, looking for all the world like Joel Grey in Cabaret. 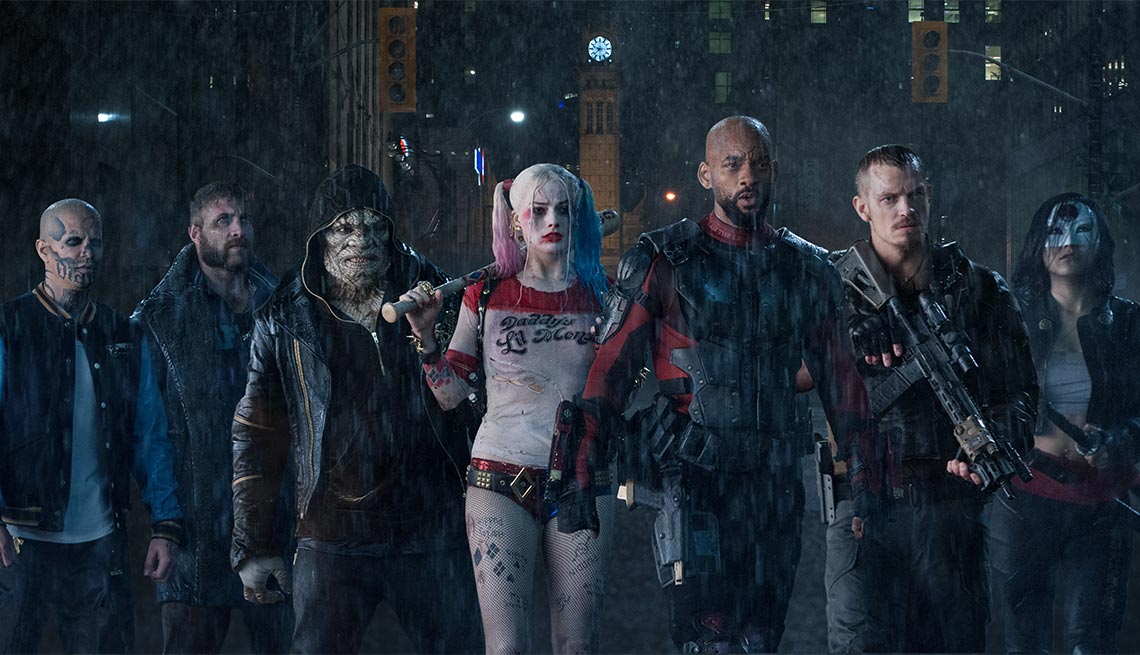 After our awkward introduction, the team is hauled from the dungeon-like confines of their remote supermax prison — yes, just like the one we saw a few weeks ago in Captain America: Civil War and countless other superhero flicks. Incidentally, the prison design seems to confirm one of the unspoken traits common to most superheroes: They lack bodily functions. This we know because in those solitary jail cells — the ones that stand like zoo cages in the middle of large, dark rooms — there is never, ever a bathroom facility. Think about it. OK, don't think about it.

The team is immediately implanted with tiny explosives that will blow their heads off if they disobey orders or try to escape. (One of the few sources of fun in the early going is to figure out which of the newly formed team will be the one whose noggin gets blown up. Hint: It's not one with a good backstory). Rick Flag and Amanda Waller control the little bombs with their smartphones, a feature that garners the one funny line in the movie: "The ultimate killer app!"

Their mission is pretty straightforward: A supernatural entity has taken over Midway City — a place that seems to lie halfway between Gotham City and Metropolis. The team has to sneak into town and take out the spook. There is a complication in that the entity possesses the body of Rick Flag's girlfriend, but that detail gets lost in helicopter crashes, a battle with the rock men and the blazing blue light that whirls above the entity's lair for no discernible reason.

The final battle, staged in the great hall of a train station, is spectacular, but again familiar — not in a vaguely reminiscent way, but in a wait-a-minute-this-is-a-complete-ripoff way.

Virtually shot for shot, moment for moment, the scene is a shabby restaging of the finale from Ivan Reitman's original Ghostbusters. Atop a stairway in front of our heroes stands a sexy, otherworldly female figure, gyrating and hissing threatening words in front of what looks like a fiery portal to another world. When members of the Suicide Squad raise their weapons to fire, they may as well be Dr. Venkman and company aiming their proton guns. There's even a moment when the Evil One makes a telepathic connection with the Squad — the only difference being this one does not conjure up the Stay-Puft Marshmallow Man.

With the market for superhero franchises at an all-time high, it's perhaps understandable that the writers have run out of fresh ideas. But Suicide Squad, which has positioned itself as an edgy new take on the genre, is especially egregious in its cannibalization of films that came before.

It's not a good sign when you find yourself fumbling in the dark for your cellphone, wishing you had that killer app.