En español | Women have taken over the goo-glomming duties that four (male) Ghostbusters performed so well in both the 1984 film and its 1989 sequel. What does that leave on our hands?

One ton of retro fun.

It helps that the four female fright-fighters driving this sequel are some of the wittiest women working in entertainment today: Melissa McCarthy leads the banshee-battling bunch, ably assisted by Saturday Night Live favorites Kristen Wiig, Leslie Jones and Kate McKinnon.

Made with the blessing of the original squad (Dan Aykroyd and Ivan Reitman both produced), the new Ghostbusters features amusing cameos by just about everyone from the first two films, with the regrettable exceptions of Rick Moranis and Harold Ramis. That means Bill Murray, Sigourney Weaver, Ernie Hudson and Annie Potts all turn up, along with some very familiar ghosts, too. 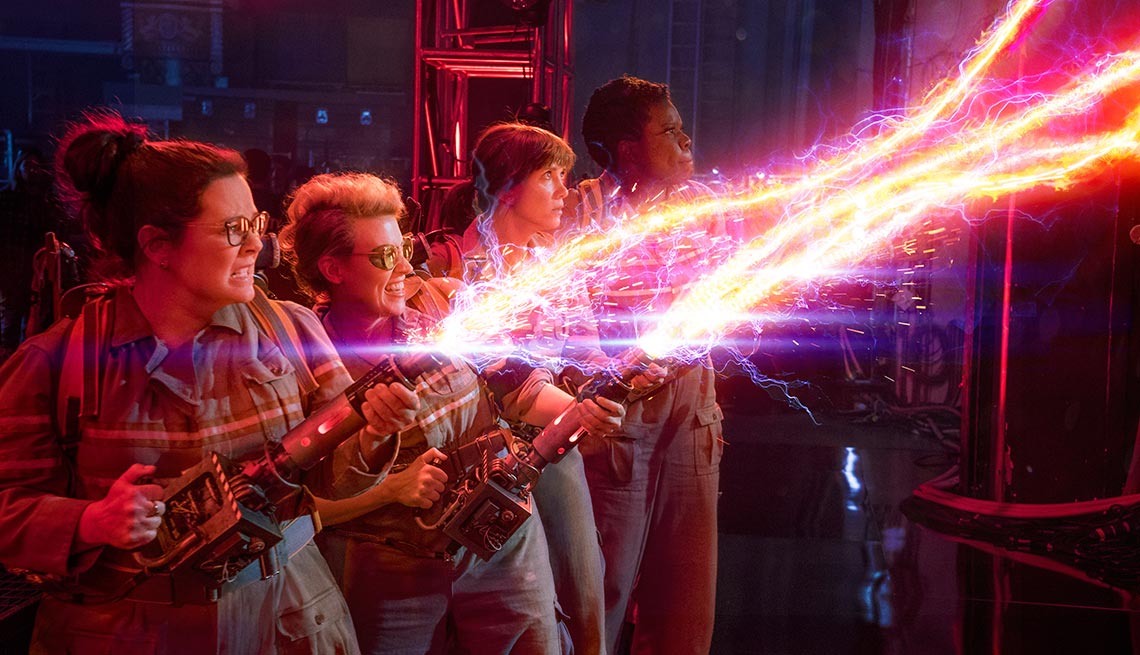 Indeed, director Paul Feig (Bridesmaids) reverentially honors all sorts of Ghostbusters conventions while managing to stand a few on their heads. As in the iconic original, the slime starts oozing practically right from the start — except the haunted house this time around is an old Manhattan mansion. Our new breed of ectoplasmic exterminators proves equal to every task, brandishing those well-known proton backpacks, careering about the city streets in an updated Ghostbustermobile and looking positively chic in matching jumpsuits.

And the ladies put their own distinctive comic stamp on the familiar plotline. Shortly after teaming up, they hire some serious male eye candy in the form of Chris Hemsworth, who contributes an adorable turn as their dumb-as-rocks secretary. And before you know it, the Ghostbusting gals are called upon to reach their gender-bonding best in order to thwart an evil genius; that would be bellboy Rowan North (Neil Casey, a recent SNL writer), who plots to unleash every ghost in Gotham as revenge for being bullied his entire life.

The New Ghostbusters ride to the rescue, of course, but not before being ridiculed and marginalized by all sorts of doubting Thomases — foremost among them the mayor, his myrmidons and the media. One male reporter goes so far as to scoff, "Are they to be taken seriously?" Dude, it's 2016 — did you not get the memo that women can be scientific geniuses, history experts and ghost hunters, doing so backward and in heels?

I hesitate to call it social consciousness because I wouldn't want to scare off (ha ha!) even one prospective viewer, but therein lies the crucial difference in this Ghostbusters: Whereas the boys in the original became overnight celebrities, the girls in the reboot must fight an uphill battle to be believed. Thanks to screenwriters Feig and Katie Dippold, the four actresses revel in a rollicking script, peppered with feminist zingers lampooning everything from sexism to politics and beyond.

The result is comedic chemistry. Each woman hits her own high notes, but the breakout performance here belongs to Kate McKinnon's loopy engineer, whose inventions literally explode across the screen. Like an earlier master of mopping up other people's messes, McKinnon is practically perfect in every way.

Will Ghostbusters keep you in suspense like 10 Cloverfield Lane? Will it set you searching for a good book like Genius? No, but this fast-paced extension of a beloved franchise is the very definition of what a summer movie should be: a fun and frothy confection that will have you blinking at those bright lobby lights with a smile on your face. (Especially if you sit through all the credits to catch the fun outtakes.)

As for that goofily catchy Ray Parker theme song that was such a big part of the original's success, prepare to have it lodge in your brain anew. A movie critic I happen to know extremely well has been traipsing around her condo for days now, singing "Who you gonna recall? Ghostbusters!"

Jenny Peters is a Los Angeles-based entertainment and lifestyle journalist.