(Video) Genius Movie Trailer: A chronicle of Max Perkins' time as the book editor at Scribner, where he oversaw works by Thomas Wolfe, Ernest Hemingway, F. Scott Fitzgerald and others.

The list of great movies about authors could fill, well, a book. But movies about editors? That's something you don't see every day.

Splendidly heartfelt and defiantly cerebral, Genius trains a sepia-toned spotlight on one of the best book editors ever: Maxwell Perkins of Charles Scribner's Sons, who early in the 20th century guided the pens of F. Scott Fitzgerald and Ernest Hemingway. Both of those authors make cameo appearances in Genius, but the film's real focus is on Perkins' volatile relationship with his most enigmatic discovery: mercurial, self-destructive Thomas Wolfe.

As played by Oscar winner Colin Firth (The King's Speech), Perkins is an editor possessed. After a long day wielding his red pencil in Manhattan, he reads book manuscripts on the train home to Connecticut, then barely kisses his wife (Laura Linney) and five daughters on their heads before retreating to the study for more literary infusion.

Through Scribner's doors one day blows Wolfe (Jude Law), an unpublished novelist whose wildly inventive but seemingly endless torrent of prose is desperately in need of radical pruning by Perkins, a master of simplification and story structure. 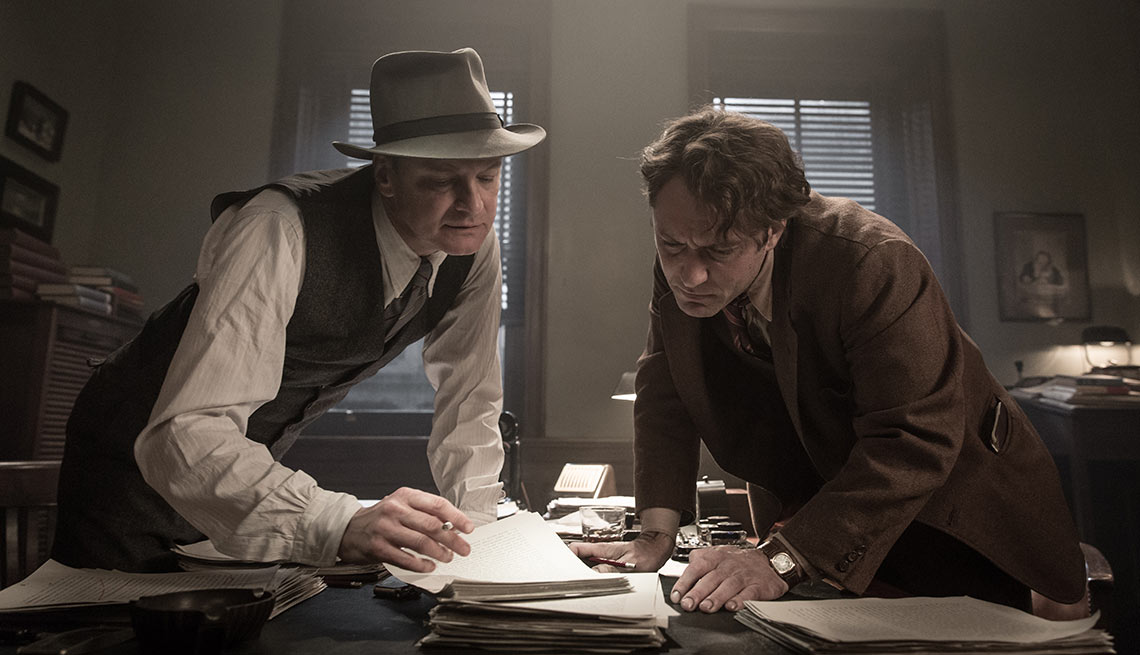 For the next hour or so of Genius (based on a National Book Award–winning biography by A. Scott Berg), director Michael Grandage and screenwriter John Logan (Gladiator, Skyfall) provide a spellbinding fly-on-the-wall perspective to the pair's creative process. There are nose-to-nose confrontations over manuscript length — Wolfe brings the draft of his second novel into the office in a wheelbarrow — as well as page-tearing, line-scrawling, chain-smoking montages that resemble training scenes from Rocky, only this time the protagonists pound Remington typewriters instead of slabs of beef and guzzle straight whiskey instead of raw eggs.

Along the way, the two men's relationship grows from editor and author to something more akin to father and son. The two stars play off each other masterfully. Law's Wolfe is a force of nature, expounding on humanity and the cosmos, wild hair flying, arms spread in what can only be described as a universal embrace. Firth's Perkins — his felt fedora seemingly pasted to his head, even at the family dinner table — remains a heroically stoic presence, lips pursed, eyes narrowing as he formulates literary frameworks strong enough to contain the young man's churning supernovas of creativity.

Each star brings a different kind of energy to his part, but the film's most compelling moments come when the intellectual action screeches to a halt and someone reads a bit of Wolfe's writing out loud. For these passages, screenwriter Logan wisely lets Wolfe's authorial voice commandeer the proceedings. It requires no stretch of the imagination to believe the first such recitations of Wolfe's raw work were, to the literary-minded, equivalent to the revelation of sacred scripture.

At one point, Perkins starts to agonize about his role as syntactical surgeon: "That's what we editors lose sleep over, you know," he sighs. "Are we really making your books better, or just making them different?"

Nicole Kidman, her eyes aflame, nearly sets the screen on fire as Wolfe's antagonist-benefactor-jilted lover Aline Bernstein, a married stage designer who first brings the writer to Perkins' attention. Both she and Linney break your heart a bit as their characters come to realize they have been, for the moment at least, consigned to the colophons of their men's life stories. The guys, to be sure, pay a price. But only one of them learns a lesson.

Writers and their editors know too well how easily artistic aspirations can end up dashed on the rocks of opposition — or, worse, indifference. But that's not something easily conveyed to outsiders, who tend to view aesthetic calamities as small potatoes in a world where people, you know, starve. The genius of Genius is its patience in building its case.

The film's climactic moment is signified by nothing more than Perkins finally removing that stupid hat. And yet we catch our breath when it happens. For two hours we've explored the power of the written word, and in an instant a minor gesture adds a visual exclamation point.

Words, pictures — it doesn't matter. Genius proves that in the right hands, either one can sneak up and swallow you whole.