(Video) Finding Dory Movie Trailer: The friendly-but-forgetful blue tang fish reunites with her loved ones, and everyone learns a few things about the real meaning of family along the way.

En español | The new Pixar movie, Finding Dory, might be more aptly titled Finding Their Voices. For all the splendor of the animation in this follow-up to the 2003 instant classic Finding Nemo, the talents behind the microphone elevate the film far above the status of a mere sequel.

In the title role, Ellen DeGeneres is naturally the main attraction. Her pop-eyed, blue-gilled Dory, the fish with chronic short-term memory deficiency, was the best thing about Nemo — and that's saying a lot. Her return to the role here is nothing less than magical.

As you'd expect, DeGeneres has the funny bits down pat, particularly Dory's rambling monologues. Thanks to her memory lapses, these usually take several detours, only to wind up at a destination thoroughly unrelated to the original subject. But it's in Dory's quieter moments that DeGeneres breathes a soul into her little blue character: Speaking barely above a whisper, she alternately registers wonder, trepidation and, occasionally, heartbreaking sorrow.

Robin Williams, for his turn as Aladdin's genie, should have become the first voice actor nominated for an Oscar. For her work in Finding Dory, DeGeneres deserves the same consideration.

As the title implies, there's a certain organic repetition to the plot of Finding Dory. In the first film, a tiny clownfish was the target of the search, led by his frantic father, Marlin — voiced then, as now, by Albert Brooks. Helping him was Dory, a bit of comic relief who ended up stealing the show. Now Dory swims off in search of the parents she can only dimly remember, challenging Nemo and Marlin to keep up with her impulsive misadventures. 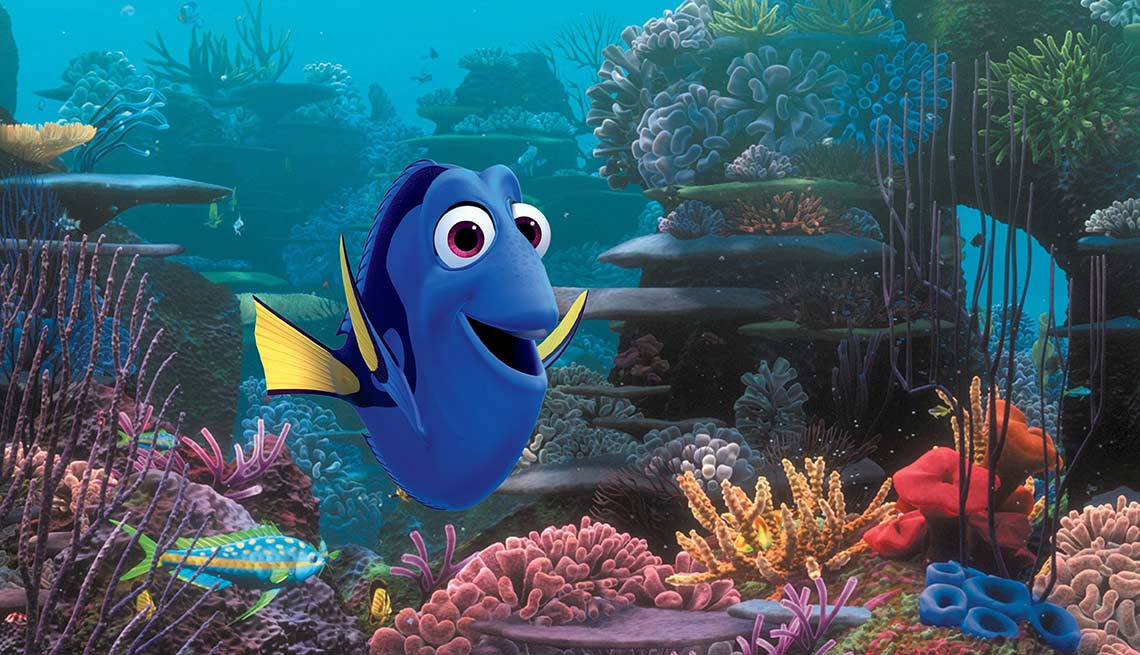 Along the way they meet a seaful of memorable characters, all rendered unforgettable by terrific veteran voice actors. A grumpy octopus provides lots of clever sight gags, but the voice of Ed O'Neill (Modern Family) also allows him to explore his (for lack of a better word) humanity. Diane Keaton and Eugene Levy bookend the film as Dory's mother and father, and their lyrical tones convey the obsessive protectiveness and thinly veiled dread that every parent feels at one time or another. Ty Burrell pretty much transfers his fastidious Modern Family character to the role of a beluga whale; in the end, that choice seems perfect. And in one of the film's nicest running gags, Sigourney Weaver becomes, despite her softly musical vocal lilt, the Voice of God to the fishy populace.

No review of a Pixar film would be complete, of course, without noting whether John Ratzenberger of Cheers fame keeps his perfect attendance record intact. He does, popping up as a tiny crab named Bill.

The wonders of Pixar animation are on full display here, by which I mean the artists' evocation of this undersea world induces many a gasp. The storytelling is likewise first-rate overall, even though I couldn't shake the feeling that the writers had reached an impasse on how to end the film; they solve the problem via compromise, presenting three perfectly serviceable fade-outs, one after another.

And then there is a fourth finale, coming after the cascading credits at film's end. It's a bit that manages to tie up a loose end the writers left dangling at the end of Finding Nemo, 13 years ago. Like Finding Dory itself, it's worth the wait.