(Video) The Birth of a Nation Movie Trailer: Nat Turner, a literate slave and preacher in the antebellum South, orchestrates an uprising.

The challenge of depicting brutality without turning the viewer away has dogged artists since early humans painted woolly mammoth hunts on cave walls. Nate Parker's The Birth of a Nation, the story of Nat Turner's bloody 1831 slave rebellion, rises admirably to the task.

Despite having included scenes of extreme violence, utter degradation and grisly revenge, Parker — directing his first feature film — labors mightily to keep his movie eminently watchable. And he succeeds in a way that makes the tragic story of a failed attempt at liberty feel ultimately triumphant.

Parker, who also wrote the script, stars as Turner, a Virginia slave whose masters allowed him to learn how to read, so long as he stuck exclusively to the Bible. Treated as something of a novelty by his owner, Turner was pressed into service to travel to nearby plantations and preach a twisted gospel of black subjugation to his fellow slaves.

But Turner's voracious reading of Scripture led him to believe he had been chosen to lead a rebellion. The resulting 48-hour bloodbath killed scores of white slave owners and their families, while the immediate reprisals by whites spelled death for hundreds of blacks — many of whom played no part in the uprising.

On that historical canvas Parker has painted a portrait of a conflicted hero whose worldview is both expanded by the majesty of Scripture and limited by his institutionalized naivete. 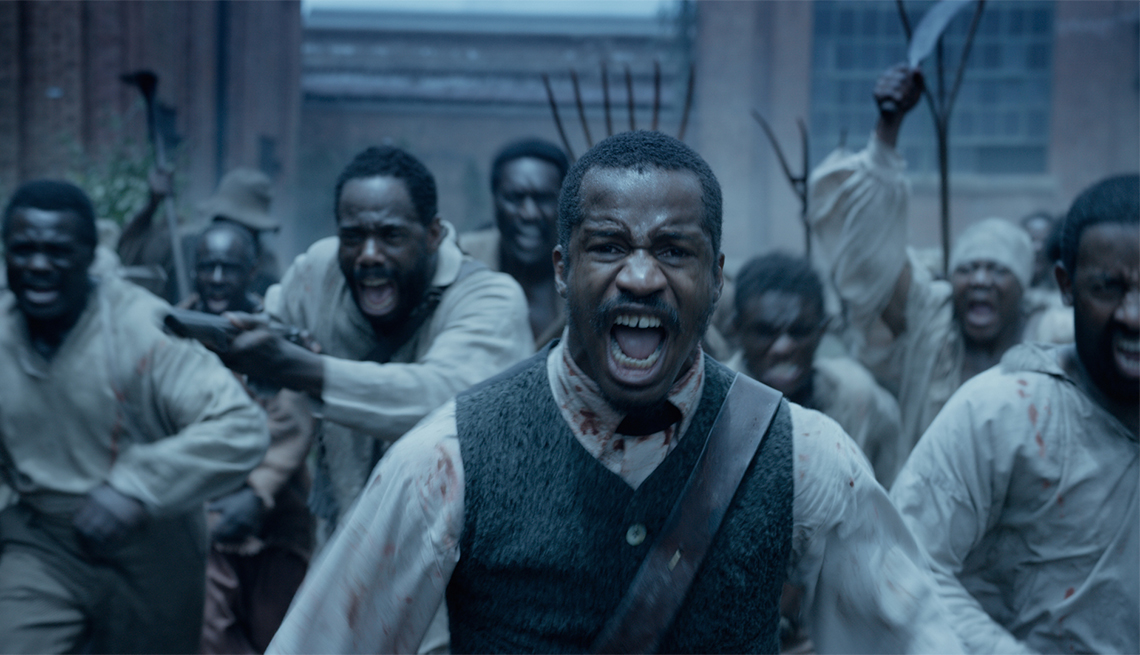 Nate Parker stars as the rebellious African American icon Nat Turner in "The Birth of a Nation."

Parker gives a powerful performance. Channeling the sheer anguish of Turner's predicament, he nonetheless registers moments of serene joy as Turner meets and marries his soul mate (Aunjanue Ellis), fawns over his mother (Esther Scott) and baptizes a local white man. As he preaches to his fellow slaves, his warped gospel of supposed black inferiority — mouth twisted, eyes tortured — we feel the bile rising in our own throats.

An especially intriguing character study is that of Turner's master, Samuel, played with quiet intensity by Armie Hammer. Samuel's livelihood depends on the peculiar institution of slavery, which he sees as part of a historical continuum. But he also prides himself on treating his slaves "well" by the standards of the day (if such an adverb can be applied to a subjugated people). At times Samuel seems genuinely fond of his captive workers, especially of Nat. And as the two men make the rounds of other plantations in the area (Virginia's Tidewater region), the slaveholder instinctively recoils at the horrendous conditions they witness.

As a director, Parker slyly insinuates his audience into Samuel's morally complacent shoes. The opening passages of The Birth of a Nation portray a rather soft-soaped view of slavery: The work is hard, but the slaves have their own cabins and fireplaces — and aren't there personal keepsakes on every mantel? The slaves' children play with those of the slave owners. The plantation matriarch (Penelope Ann Miller) even drops in to visit.

The physical surroundings suggest some sort of antebellum paradise. Tree branches hang low over lush green lawns, a river flows lazily past and the golden-hour sunlight turns the cotton fields a fiery red.

Encountering this weirdly disconcerting, Gone With the Wind-style image of slavery, we wonder what Parker is up to. But slowly he unfolds the true horrors of human bondage. There is hunger. The slaves must seek their owners' permission for every aspect of life, even marriage. And when forced to choose between mercy and maintaining the approval of the outside world, Samuel doesn't hesitate: In an emotionally devastating episode, a slave watches helplessly as his wife is ordered to the plantation house to be raped by a visiting dignitary.

As Samuel contentedly puffs his clay pipe on the veranda, at peace with his conscience but ignorant of the gathering storm, it's hard not to see in him the generations of Samuels who followed — men of privilege who regarded the racial landscape and reassured themselves, "That's good enough."

It wasn't. Nate Parker's remarkable film provides a vision of slavery from which we cannot look away. It also forces us to take a hard look at ourselves.