(Video) Ben Hur Movie Trailer: The epic story of Judah Ben-Hur (Jack Huston), a prince falsely accused of treason by his adopted brother, an officer in the Roman army. After years at sea, Judah returns to his homeland to seek revenge, but finds redemption.

The fourth big-screen version of Lew Wallace's 1880 novel Ben Hur: A Tale of the Christ suffers its share of narrative knots in the final reel. But it also offers a spectacular scene that justifies the price of admission — and no, it's not the chariot race.

Heston is Huston this time around, with Jack Huston (American Hustle) taking the reins of the title role immortalized by Charlton Heston in the 1959 version. A Jewish prince living in Jerusalem at the time of Christ, Judah Ben-Hur is a guy who just wants to keep his head down and enjoy his mansion, his family and his wife (Nazanin Boniadi of TV's Homeland) while outside his door Roman troops terrorize the locals into submission.

That seemingly remote threat hits home when Roman legionnaires break down his door and cart his family off to apparent doom. Our hero finds himself in the bowels of a galley, where every pull of the oar gets him closer to exacting revenge on the man who put him there (Tony Kebbell), a Roman officer he once counted as a brother. 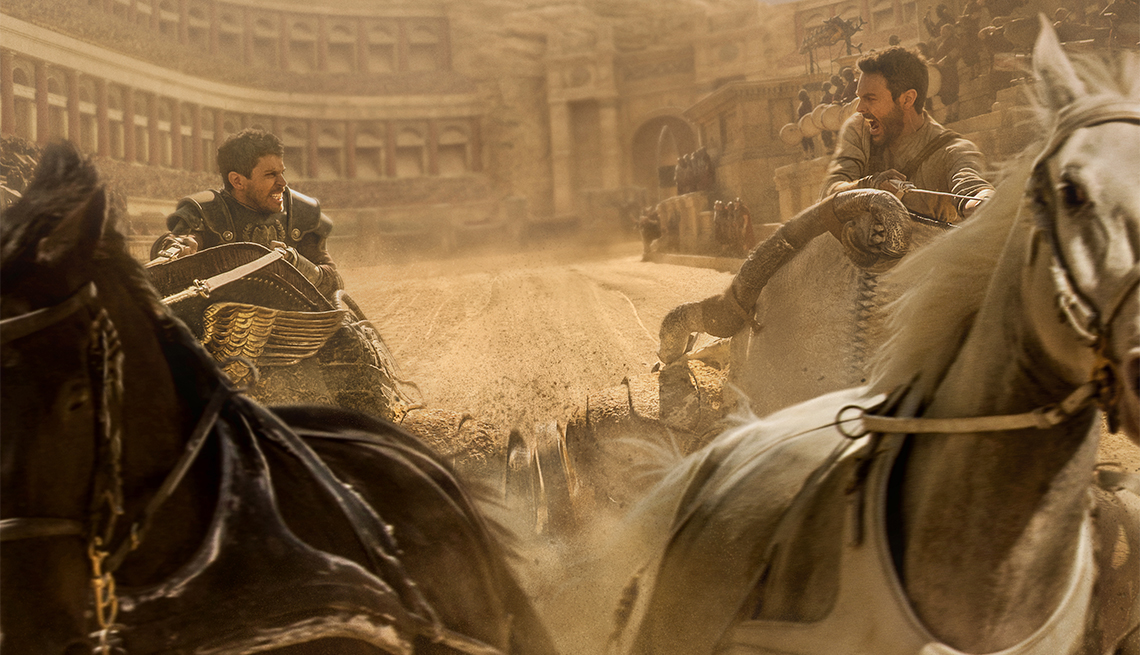 You'd better have more than a profit motive if you're going to remake a classic film. Thankfully husband-and-wife producers Mark Burnett and Roma Downey (The Bible) have taken the novel's subtitle to heart in reimagining Ben-Hur, using Jesus of Nazareth (Brazilian star Rodrigo Santoro — Xerxes in 300) as a leitmotif of forgiveness and grace: When tensions mount and characters reach the verge of vengeance, the Christ intervenes in body or spirit, softening their bloody resolve.

Such thoughtfully quiet moments, however, are not the strong suit of Russian director Timur Bekmambetov, whose Night Watch films gave us some of the 21st century's most thrilling action scenes. If he was brought on board primarily to handle the story's iconic chariot race, it was a smart move: Bekmambetov creates a dust-choked, hoof-thundering hell whose realistic intimacy no previous Ben-Hur has achieved. Not one frame of the sequence rings false. Best of all, as you breathe a sigh of relief at the end you also think, Let's do that again!

As splendid as the chariot scene is, a sea battle steals the movie. After five years of rowing to the relentless beat of a drum, Ben-Hur and his fellow captives find themselves heading straight into a fleet of Greek warships. Another filmmaker would have pulled back to give us the big picture, but aside from a few establishing shots, Bekmambetov never leaves the darkness of the galley. We see only what the rowers would see through their tiny oar holes or the thick wooden grates above: blurred glimpses of enemy ships approaching at full speed, fiery arrows whizzing across the water, Greek swords piercing the planks as hand-to-hand combat rages on the deck above. Burning tar pours through gaps in the boards, making a human torch of the drummer — who never misses a beat. It's a harrowing sequence, and unlike anything you've seen before. This is not just the fog of war; it's war in all its blind, brutal horror.

In a summer that has seen armies of superheroes and antiheroes do battle in whirlwinds of disorienting camera angles and frenzied editing, Ben-Hur's epic sea encounter — told from within the confines of a prisoner's floating cell — is the most startlingly original and nerve-shattering action sequence of the year.

The film's performances are all fine, but let's face it: This was a pretty low bar to begin with. Heston was a presence more than an actor, and Stephen Boyd — who played his best friend/nemesis, Messala Severus — was a dimple-chinned stiff. Huston and Kebbell breathe easy life into the characters, making this Ben-Hur a human story rather than a Sunday school pageant. As the nomadic sheik who helps Ben-Hur gain his revenge, Morgan Freeman won't win an Oscar (as Hugh Griffith did when he played the role in 1959). Yet Freeman's performance is superior by far, even if you suspect he's been given certain speeches just so we can hear that magisterial voice.

If one thing fails this movie, it's the script. Screenwriters Keith R. Clarke and John Ridley move things along moderately well for the first 90 minutes; then, after the climactic chariot race, the scenes rush by like an extended trailer for coming attractions. In trying to tie up every loose end, they weave a Gordian knot that could not be severed even with the super-sharp Roman sword our hero conjures out of thin air after five years of rowing virtually in the nude.

The novel Ben-Hur was the best-selling book since the Bible, and the 1959 movie remains tied for most Oscars won by a single film (11). You can argue it's a story that didn't need to be retold 57 years later, but in many ways this version is a better movie.

Oddly, that's still not enough to make it a classic.