A movie about the inevitability of loss will probably not bring viewers running. But as Alice Howland — a Columbia University linguistics professor and mother of three who learns she has Alzheimer's at age 50 — the 54-year-old Julianne Moore delivers a performance that sweeps us up, then blows us away.

It's no small feat — especially considering that portions of this film have a Hallmark-movie feel, and that some of Moore's costars do not rise to the occasion.

Adapted from the best-selling 2009 novel by neuroscientist Lisa Genova, Still Alice opens with a portrait of a seemingly picture-perfect family. Its matriarch — the beautiful, fiercely intellectual Alice Howland — is celebrating her half-century birthday at a dinner hosted by her adoring husband (and fellow academic), John (Alec Baldwin), at a tony Manhattan restaurant. There they are joined by two of their children: lawyer Anna (Kate Bosworth of Superman Returns) and doctor Tom (Hunter Parrish of Weeds), gorgeous and accomplished in equal measure. Absent is the couple's youngest, Lydia (Kristen Stewart); to the chagrin of her brainy parents, she has blown off college to pursue an acting career in Los Angeles.

But trouble arrives soon enough. During a presentation, Alice fumbles for words — not what you'd expect from a linguist. And a few weeks later, in the middle of her daily jog across the Columbia campus, she becomes disoriented and can't find her way home.

From the instant Alice receives her diagnosis — early-onset Alzheimer's disease — her face signals something known to anybody who has watched a loved one battle this affliction: The beginning stages are the worst. That's when the patient, especially one as sharp as Alice, is still terrifyingly aware that her mental faculties are inexorably slipping away. Moore's ability to convey the horror and tragedy of such an experience should be rewarded by a long-overdue Oscar. 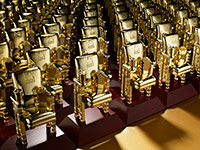 Less successful are writer-directors Richard Glatzer and Wash Westmoreland at capturing the impact of Alice's diagnosis on her family members. In a scene that feels lifted from a Nicholas Sparks novel, Alice and John tearfully profess their love for each other on a windswept beach — whereupon John informs his wife that he plans to take a new job at a prestigious university and move her away from everything she knows.

Abruptly we learn that Alice's case of Alzheimer's is hereditary; might she have passed the gene along to her children? Whether Tom and Anna (the latter pregnant with twins) decide to be tested, and how they react to the results, is dealt with a bit too clinically for my taste. More nuanced is the decision-making process we watch Lydia work her way through; by the time she opts not to be tested, Stewart has given us a visceral sense of the complex dignity bound up in that choice.

Moore and Stewart are good friends in real life. That connection yields some convincing mother-daughter chemistry on screen, and it keeps Moore from walking off with the show. As Alice's prodigal daughter — and in common with many adult children of parents suffering from Alzheimer's, I'm sure — Lydia manages to find some redemptive solace by tapping into what is "still Alice" about her mother, despite her decline.

Ironically, Glatzer and Westmoreland, a married couple, decided to move forward with this project shortly after Glatzer himself received a diagnosis of ALS, or Lou Gehrig's disease. By the time filming started, he needed an assistive device to speak. No doubt his direct experience of progressive illness gives Still Alice much of its poignant realism — and much of its power.