(Video) 'Southpaw' Movie Trailer: 'Southpaw' is a down and dirty sports flick that comes out swinging in the early rounds, then loses steam and finally staggers to a split decision.

Professional boxing seems to be going the way of pelota — a sport that was all the rage in Oaxaca before Columbus showed up. Yet Hollywood just can't resist climbing into the ring every year or so in the name of drama, redemption and lots of flying blood.

Answering the bell right on schedule is Southpaw, a down and dirty sports flick that comes out swinging in the early rounds, then loses steam and finally staggers to a split decision.

It's no surprise to see director Antoine Fuqua lacing on these gloves, given that boxing combines his trademark choreographed violence (The Equalizer, Olympus Has Fallen) with the sort of flawed, gritty characters who populate his best films (Training Day, Shooter). 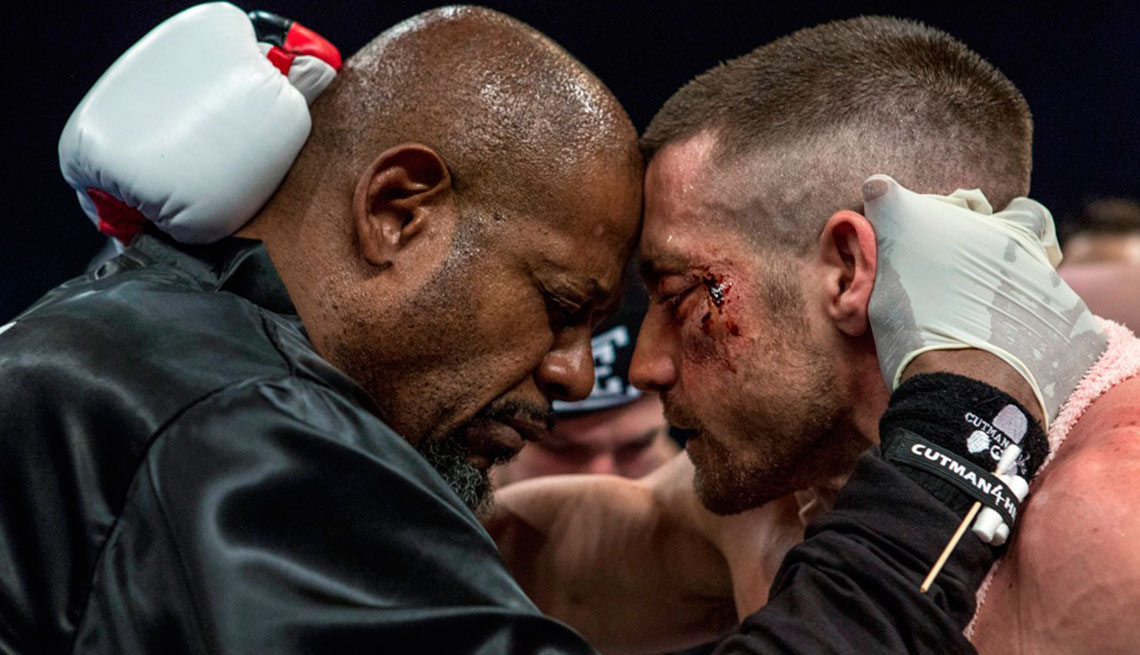 One person you wouldn't expect to find dancing around the canvas, though, is the film's star, Jake Gyllenhaal. When we last encountered Gyllenhaal, he was the emaciated, crazy-eyed sociopath Louis Bloom in 2014's Nightcrawler. He should have won an Oscar for that part but was not even nominated. Seeing him here — as bulked up as Louis was scrawny, as monosyllabic as Louis was motormouthed — you can't help wondering if Southpaw might be Gyllenhaal's way of pummeling the Academy into submission.

With inevitable leitmotifs borrowed from Rocky, Raging Bull and even Wallace Beery's 1931 weepie, The Champ (with adorable Oona Laurence subbing for little Jackie Cooper), Southpaw connects all the overly familiar dots of its genre. When we meet Billy "The Great" Hope (his name echoes the classic boxing play The Great White Hope, but the film never bothers to make the connection), he's at the top of his game: He's got a championship belt; a beautiful and adoring wife, Maureen (Rachel McAdams); and that irresistible daughter, Leila (Laurence). But life lands one haymaker after another, and before long Billy is indigent. Worst of all, he's lost custody of his beloved Leila.

Indeed, director Fuqua and writer Kurt Sutter (TV's The Shield) pile so many misfortunes on Billy so quickly that we half expect locusts to come swarming from his locker.

But Billy's not named "Hope" for nothing. He resolves to pick himself up by his gym socks and reclaim not only his former glory, but his little girl, too. With the help of a grizzled old boxing coach (in the movies, is there any other kind?), played to delightful perfection by Forest Whitaker, Billy whips his scarred, beaten body and soul into shape for a climactic winner-take-all match against a formidable foe indeed: a fighter who has in his corner — naturally — the very boxing coach (50 Cent) who triggered Billy's downfall through a ruthless betrayal.

In Southpaw, Fuqua comes closest to recapturing the intriguing character development he showed us in Training Day. Denzel Washington won an Oscar for that film in 2002, and Gyllenhaal's transformation here may duplicate that achievement. But as a film, with its by-the-numbers plot and occasional cauliflower ear for dialogue, Southpaw telegraphs one punch too many.