Some movie moments can never be relived.

We'll never recapture the wonder of the first time we saw Dorothy pass from her sepia-toned farmhouse to Technicolor Munchkinland, for example, or when Earth, Moon and Sun aligned to the strains of "Also Sprach Zarathustra" in 2001: A Space Odyssey.

Likewise, there's no way to replicate the breathtaking moment when, in 1993's Jurassic Park, Sam Neill's eyes fairly burst from their sockets at the sight of giant herbivores munching the tops of 50-foot trees. 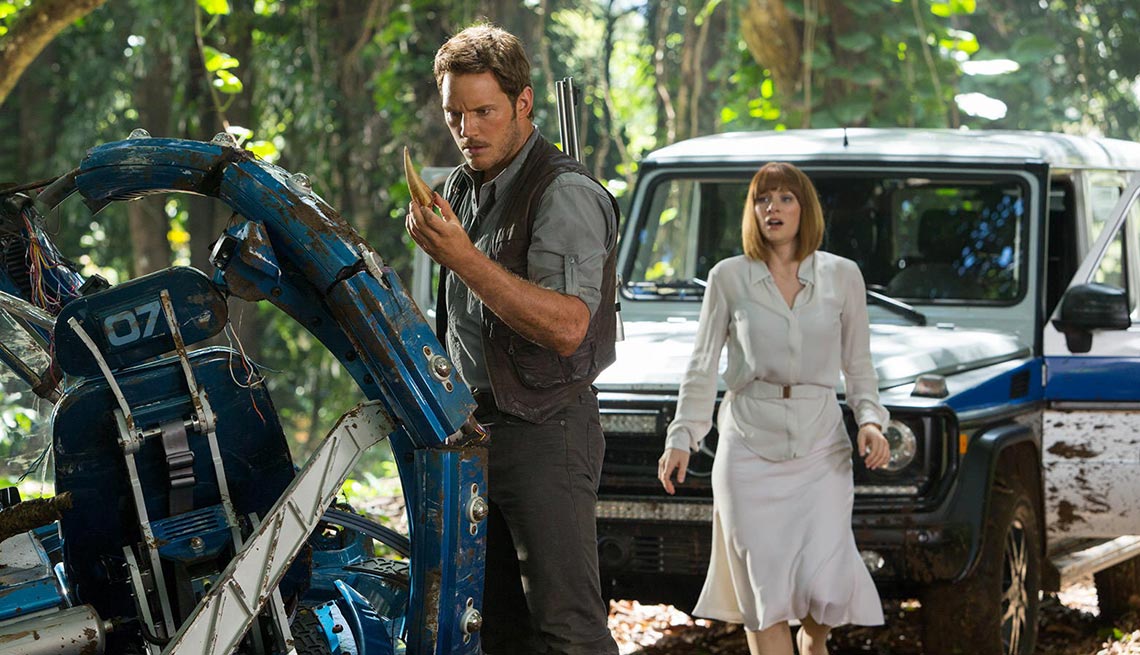 Nonetheless, there's no shortage of magical scenes in Jurassic World, the third sequel to Steven Spielberg's original dinosaurs-on-the-rampage thriller. Computer effects have become so ridiculously realistic that director Colin Trevorrow — clearly working closely with producer Spielberg — gets up close and personal with extinct critters in ways that were unthinkable 22 years ago. Customers at the movie's Jurassic World Theme Park not only get to watch the dinosaurs, they get to pet and ride them, too. And when things go bad, as they invariably do in any Spielberg film, parkgoers disappear quite graphically down more than one dino gullet.

If movie technology has advanced in the past two decades, so too have the fanciful sciences of dinosaur cloning and observer safety at the rebranded Jurassic World. (Wishing to distance themselves from those regrettable events of 1993, the theme park owners have dropped the name "Jurassic Park.") The awful mistakes made by founder John Hammond (Richard Attenborough in the original, memorialized here with a monumental Walt Disney–like statue) have been ironed out, and the park he dreamed of — "Spared no expense!" — is now one of the world's most popular tourist attractions.

But in a world of wall-to-wall special effects, Jurassic World visitors have grown a bit bored by lumbering brontosauri and caged velociraptors. Thus, to stave off a drop in attendance, the park's CEO (Indian star Irrfan Khan) and his deputy (Bryce Dallas Howard) have cloned a new superdino; think of a T. rex, only meaner, deadlier and bigger. Not to worry, though: The monster's safely enclosed behind a 40-foot containment wall.

What could possibly go wrong?

Luckily for viewers, everything — and almost immediately. Before long the new attraction is chowing down on park staffers and springing his fellow predators from confinement, turning Jurassic World into one big paleontological picnic, with humans as the sandwiches.

If you're a Jurassic fan, you'll quickly spot the three character types present in all four films: The smug industrialist, who confidently (and stupidly) attempts to tame nature; the world-wise nonconformist, who warns of the danger and is blithely ignored; and a couple of innocent children, whose primary function is to run and scream a lot. Appealing young actors Ty Simpkins and Nick Robinson play brothers who bond while staying one step ahead of a rampaging beast. Chris Pratt, as the level-headed animal trainer, brings a crooked-smiled swagger reminiscent of a young Harrison Ford.

Speaking of throwbacks, seasoned moviegoers will have fun identifying the Spielberg-centric references that blossom throughout Jurassic World. There are several harrowing nods to Jaws, one or two to E.T. and Hook, and, in the very last shot, a memorable echo of Raiders of the Lost Ark.

Best of all, halfway through the film, the boys stumble upon the original Jurassic Park visitor center, now overgrown and forgotten. As they push through those big doors, one brother gingerly examines a fragment of the old "When Dinosaurs Ruled the Earth!" banner — the same one torn to shreds by a runaway T. rex in the original. It's a surprisingly touching moment, a gentle shake of filmmaking hands across two decades. For a second or two we remember what it was like to see those dinosaurs for the very first time — a moment when the movies showed us something we had never seen before.