Paul Thomas Anderson was the perfect choice to bring the hallucinogenic noir of a Thomas Pynchon novel to the screen. Like the cerebral and reclusive novelist (Gravity's Rainbow, V, The Crying of Lot 49), Anderson (There Will Be Blood, Magnolia, Punch-Drunk Love) packs his movies with quirky characters and outrageous twists. 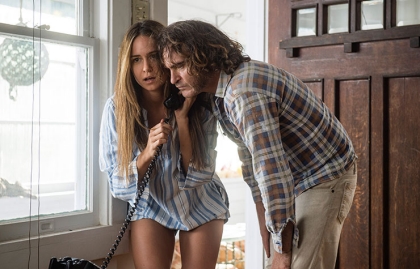 “Inherent Vice” is a roller coaster ride with endearing weirdos, including Katherine Waterston and Joaquin Phoenix.

Readers of Inherent Vice — Pynchon's 2009 thriller that plunged headlong into 1970s L.A. counterculture, showing us a byzantine counterculture through the half-mast eyes of toker detective Doc Sportello — may be excused for thinking the book was essentially unfilmable. But Anderson comes mighty close to convincingly immersing us in Pynchon's sun-drenched underworld.

Joaquin Phoenix stars as Sportello, a spaced-out private eye who's investigating two cases at once: the disappearance of his ex-girlfriend Shasta Fay Hepworth, played by the sexy Katherine Waterston (yup — Sam's kid!), and the possible murder of the husband of another client, Hope Harlingen, played by the prim Jena Malone.

After an elaborately detailed setup — thank God that Anderson used a narrator (Joanna Newsom) — Inherent Vice uncorks the plot twists, which tumble through the story like a bunch of stoners through a bag of Cheetos. Don't worry if you can't follow this roller coaster of strange turns — the fully baked Sportello himself barely manages to keep pace.

After the first hour, you'll relinquish your linear narrative hang-up and just be happy to hang with these endearing weirdos: Sportello's lifelong nemesis/comrade, a straitlaced L.A. cop (Josh Brolin); his current lover, a severely compromised district attorney (Reese Witherspoon); his client's possibly dead (but maybe not) hubby (Owen Wilson); the informant who would just as soon betray him (Benicio Del Toro); and Hollywood's worst dentist since Little Shop of Horrors (Martin Short).