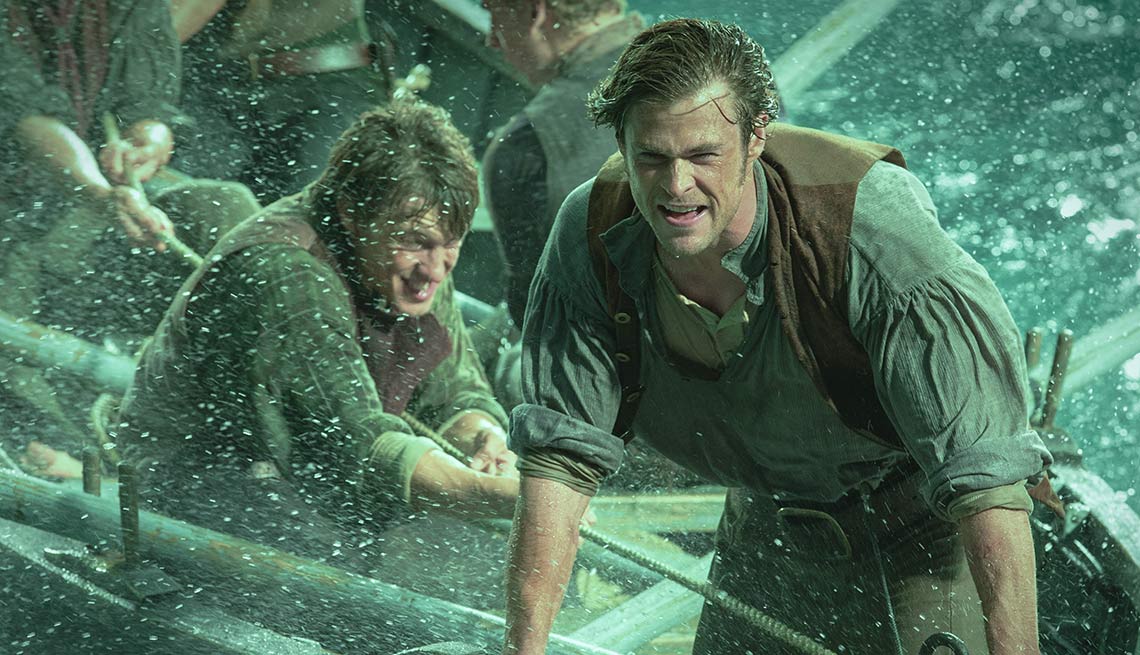 In the winter of 1820, the New England whaling ship Essex was assaulted by a whale of mammoth size, will and an almost human sense of vengeance.

Is there a tougher film-making assignment than the "adrift at sea" plot?

From Hitchcock's Lifeboat to Ang Lee's Life of Pi to Angelina Jolie's Unbroken, after all the extreme close-ups, the cracked lips, the protruding ribs and desperate gazes toward the horizon, there's a distressing sameness to them all — the inescapable sense that while it must be terrifying to be lost in the middle of the ocean, it's tedious to watch. Chris Hemsworth stars in 'In the Heart of the Sea.'

Yet here comes one of this generation's greatest directors, Ron Howard, to take a brave stab at the challenge. The trailers for In the Heart of the Sea would have us believe the film is heavy on thrashing sea battles between a resolute whaling captain (Chris Hemsworth) and a monstrous white whale. Indeed, there are three major encounters with the leviathan, and each is thrilling to behold. The whale, seemingly too large to be contained by a multiplex screen, is seen primarily in segments — most impressively its ship-shattering tail, most spookily its haunting dark eyes.

Laughably mismatched by this briny behemoth, the wooden whaling vessel is soon a splintered, burning wreck. What's left of the crew scrambles into three lifeboats released thousands of miles from the nearest land. From here on there's lots of bobbing and slow starvation — save for the occasional death of a castaway, at which point his grisly fate has only just begun. Thankfully for the viewer, Howard handles these scenes with the utmost discretion, but plan to have finished your concession-stand nachos before they start.

The film is based on historian Nathaniel Philbrick's book about the whaleship Essex, which went in search of whale oil in 1820, only to meet an uncooperative sperm whale — and a disastrous end — in the middle of the Pacific. The ship's fate reportedly inspired Herman Melville to write Moby Dick, and the film frames the high-seas adventure with scenes of Melville (Ben Whishaw) interviewing a survivor of the wreck (Brendan Gleeson), who reluctantly reveals the grim details he has kept secret his entire adult life.

The scenes between Whishaw (Q from Spectre) and Gleeson (hit man Ken from In Bruges) have an urgent intimacy about them. In some ways, their tête-à-têtes offer the film's most affecting moments: They sit together in a small living room, huddled as close as the survivors in a lifeboat — and as bound by the story of the Essex as was its ill-fated crew.