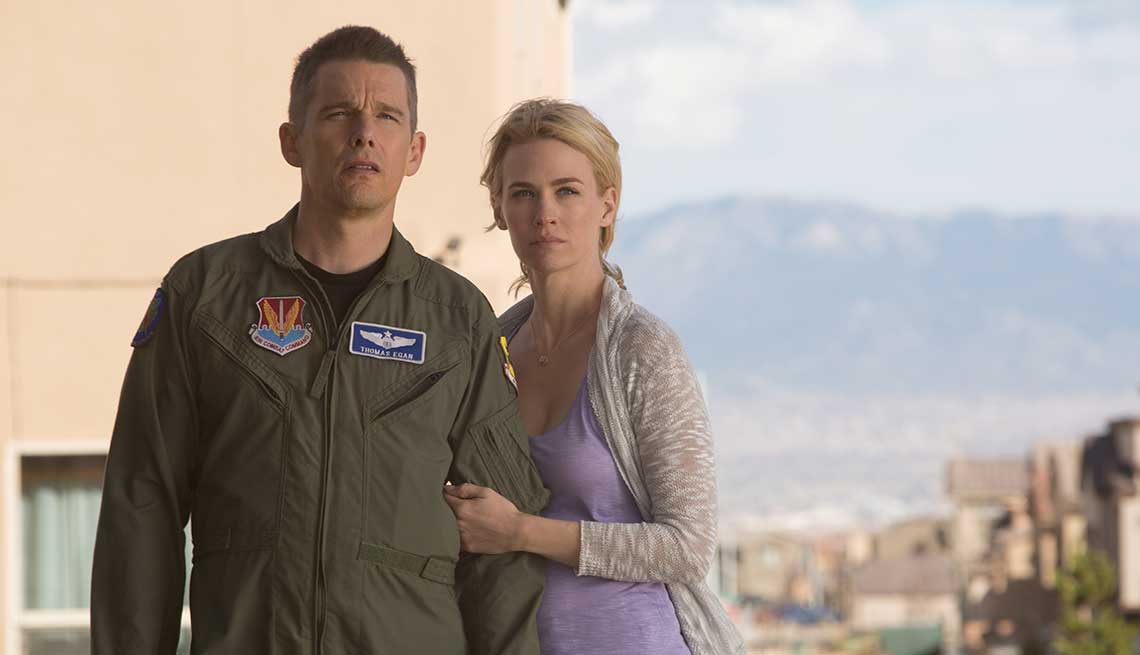 The best films don't just entertain. They open our eyes to aspects of the world whose existence we never even suspected.

That is the triumph of writer-director Andrew Niccol's startlingly contemporary drama Good Kill, a movie that lives in the land of fiction but casts a harsh light on the stark realities of 21st-century warfare.

Tom Egan (Ethan Hawke) is a hotshot U.S. Air Force pilot. Every day he patrols the skies over Afghanistan, seeking out terrorist kingpins. When he finds one, he aims and fires, blowing the culprit away in a flash of fire and a spray of sand.

Then he clocks out. Pushing open a metal door, Egan emerges into the harsh desert sun at a base near Las Vegas. He hops into his car and drives home for dinner with the wife and kids.

Egan is a drone pilot. He guides his craft, fires his missiles and tots up his body count from an air-conditioned trailer 7,000 miles removed from the carnage. He wages war in absolute safety, dimly lit comfort — and a growing sense of unease.

"I feel like a coward," he confesses to his commanding officer (Bruce Greenwood). As if to validate his misgivings, Egan and his team are assigned to a CIA operative — a disembodied telephone voice (instantly recognizable as that of Peter Coyote) — who begins to direct them toward targets of doubtful importance, with increasing disregard for the deaths of innocent women and children.

Against this troubling backdrop, Egan desperately tries to maintain a normal home life. But his conscience and overwhelming angst render him unable to carry on a conversation with his wife (Mad Men's January Jones) or his children. As Egan attempts a backyard barbecue, his eyes drift absentmindedly skyward — half looking for drones, half wishing he were back in a real pilot's seat and not "flying a desk."

Egan is a new kind of soldier — one that humankind's long, sad history of warfare had yet to develop until now. And for those who do battle by day and then dodge rush-hour traffic to reach home by night, intimacy becomes the first casualty of war.

Niccol is no stranger to "big idea" movies: Gattaca and Lord of War (both also starring Ethan Hawke) explored the perils of genetic profiling and the military-industrial complex, respectively. Niccol's script for The Truman Show (which he wanted to direct) foretold with chilling prescience the impact of reality TV. So when Niccol begins to peel back the implications of long-distance warfare waged by joystick, we pay attention.

As the conflicted protagonist — this particular brand of lethality renders the term "hero" inoperative — Hawke introduces himself to us as a poker-faced professional. He coolly gets his targets in range, gently pulls the trigger and utters an understated "Good kill" as the world below his drone erupts in hellfire. For a time, Hawke's performance is frustrating: He reveals little to nothing of Egan's thinking about his role in the global war on terror. As the films rolls on, though, we come to understand that Egan himself doesn't know how he should feel, so he suspends himself in a state of limbo that is eating him alive. In portraying the character's slow awakening, Hawke accomplishes a remarkable feat of screen acting.

Good Kill does not pass judgment on drone warfare. Instead, Niccol allows everyone to step forward and have their say, pro or con. The viewer may come away with a conclusion, but that is merely a by-product of this remarkable film. Like many a previous Niccol work, Good Kill is a human drama about a man hurled into a technological future no one could anticipate: a world in which we humans have come up with yet another ingenious way to torment ourselves.