En español | You needn't be a fanboy (or fangirl) to get an electric thrill when the classic Star Wars logo and John Williams' crashing chord open Star Wars: The Force Awakens. The effect may transport viewers of a certain age back to that spring day in 1977 when Luke Skywalker and company first did battle with the Empire.

Indeed, the seventh installment in the series — the first from writer-director J.J. Abrams, taking the joystick from creator George Lucas — strikes so many familiar notes from start to finish that some may mistake it for a redo of the original. Which is just fine for those of us who haven't had the heart (or the time) to immerse ourselves in the arcane mythology that has blanketed the Star Wars canon. For us, the films have always been more about style and swagger than substance. Please, no more sermons about midichlorians and the Force — let's get those light sabers crackin'!

Crack they do, but first we need to meet the new characters who will presumably propel the Star Wars franchise into the future. There's lovely Daisy Ridley as Rey, a young orphaned woman who lives on a desert planet and just might have the powers of a Jedi knight. (Switch Daisy's gender, and you're pretty much describing Luke Skywalker in the first film.) Soon we meet a fast-talking, risk-taking pilot (Oscar Isaac), who befriends an earnest and innocent former Stormtrooper (John Boyega). This pair fit into the Han Solo-and-Luke Skywalker mold as snugly as Han was encased in carbonite at the end of The Empire Strikes Back.

Events conspire to throw the trio into conflict with a new evil dynasty that has risen from the ruins of the Empire, which everyone knows was crushed 30 years earlier at the end of Return of the Jedi. They've come into possession of an adorable little droid — think R2-D2's kid brother — which contains in its programs a map to the location where Luke, seemingly the last of the Jedi, has been hiding out. If only we could talk Luke out of retirement, everyone agrees, the good guys would have a fighting chance.

Shades of "Help me, Obi-Wan Kenobi! You're my only hope!"

Alas, the villains — led by a black-clad, mask-wearing Darth Vader wannabe named Kylo Ren — know all about the droid's little secret, and they will stop at nothing to extract it from him. Who, oh who, can help? Well, of all the gin joints on all the planets in all the universe, who should walk in the door but Han Solo and his good-wookin' sidekick, Chewbacca?

From this point on, Star Wars: The Force Awakens presents one potential plot spoiler after another, putting a film critic in a precarious bind. As in the original films, though, director Abrams tends to telegraph the twists well in advance, giving viewers the smug satisfaction of telling themselves, "I saw that coming!" once the reveal occurs.

Also, Abrams proves no more adept at handling unmasking scenes than his series predecessors. One of the great letdowns in movie history has to be the moment when Luke gazes upon Darth Vader's real face for the first time, only to discover that Evil Incarnate resembles Otto Preminger playing a harmonica. Likewise here: When this newly minted villain removes his mask — I'm unclear on why he needed one — we get the baby face of Adam Driver, only slightly less threatening than Rick Moranis as Dark Helmet in 1987's Spaceballs. 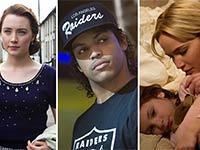 Harrison Ford is in fine form as Han Solo. When we first met him as a lanky young actor 38 years ago, it was hard to tell Han from Harrison: Was Ford utterly invested in this character or just being himself? That's what makes it such fun to watch him slip back into a role that was clearly created not for him, but by him.

Carrie Fisher, spunky and unconventionally sexy in the first three films, draws a somewhat thankless assignment this time out. Princess Leia has become the stoic, steadfast leader of the Resistance, the kind of role that ordinarily goes to rock-faced character actors. We learn some poignant details about Leia's relationship with Han since the last time we saw them, but the scenes between the two have a disappointing chill.

As for Mark Hamill, he does indeed make an appearance. But if his billing in the credits was proportionate to his character's time on the screen, Hamill would appear somewhere below Nien Nunb — the mouse-eared, barely-glimpsed fighter pilot who made his debut in Return of the Jedi. (Star Wars loyalists, console thyselves: We can expect to see a lot more of Luke in Abrams' two sequels in the works.)

It's no criticism to observe that for The Force Awakens, Abrams seems to have placed tracing paper over Lucas' original Star Wars script and sketched his plot accordingly. From the desert opening to the cantina scene to the (shield your eyes) sacrificial death of a central character to the starfighters skimming the surface of a Death Star and seeking its Achilles' hole, The Force Awakens conjures up one fondly remembered moment after another.

To which I say, "Jolly good!" Not one ticket buyer is eager to reconceptualize the entire Star Wars saga. Instead, the faithful are content to recapture the wonder we experienced a long time ago in a theater far, far away.