Director Paul Haggis pulled off a surprise Oscar win in 2005 when his Crash beat out Brokeback Mountain, so we know he can make compelling movies by weaving together seemingly disparate story threads. Haggis is also confident enough to present viewers with thoughtful material and let them draw their own conclusions from it. He goes back to that deep well in his new film, Third Person, but not even its tremendously talented cast can force its sprawling plotlines to cohere. 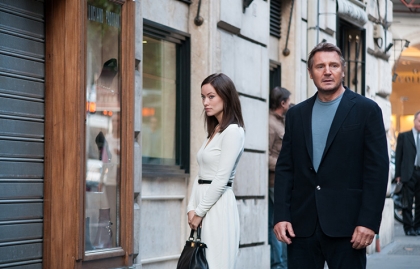 Haggis spins out three scenarios — one each in Paris, Rome and New York — with a sense of place that's hardly subtle (think lingering shots of the Empire State Building, Eiffel Tower and Colosseum). In each locale we meet a couple in varying stages of romance or dysfunction.

Haggis spends the most time with Liam Neeson, who plays Michael, a Pulitzer-winning novelist holed up in a luxury Paris hotel as he tries to grind out a new book as good as his last. Joining Michael in his hideaway is his lover, Anna, finely portrayed by Olivia Wilde (Rush, Tron: Legacy) as a feisty, lusty and sometimes-diabolic woman. While the pair have obvious chemistry (thanks, in large part, to Neeson's still-smoldering sex appeal), we don't find out what has brought them together, which lowers our interest in whether they'll drift apart. More intriguing is Michael's long-suffering and knowing wife back home, played by the talented Kim Basinger in a role that deserves much more screen time.

Meanwhile, in Rome, knockoff-suit designer Scott (a not-so-funny Adrien Brody) is wandering the city streets when he crosses paths with a sultry Romanian Gypsy (the Israeli-born Moran Atias, who was also in Crash). He pursues her romantically, at the same time agreeing to help fund the ransom she claims is needed to free her kidnapped 8-year-old daughter. Scott, too, has an estranged wife back home — could that be the "third person" referenced by the title? Or perhaps the third person is the unseen child we hear in occasional voice-overs in all three vignettes, whispering "Watch me."

We finally get to meet that child in Haggis's third and most compelling narrative. This story involves Julia (a terrific Mila Kunis from Black Swan), an unsuccessful soap-opera star struggling to regain her feet by working as a hotel maid; Julia recently lost custody of her toddler son when her ex-husband, Rick (James Franco), accused her of child abuse. A high-flying artist living in a Manhattan loft with his new girlfriend, Rick is forever dreaming up new ways to torment Julia, likely harming the child more than his mother ever did. Maria Bello (A History of Violence) plays Julia's attorney, Theresa, fighting to secure visitation rights (in a real-life twist Haggis must savor, Bello was pre-law at Villanova).

Theresa has the only direct connection to a character in one of the other two story lines; otherwise the stories are linked only ideologically. That would be fine if the relationships resonated emotionally, but they don't. Inexplicably, Haggis spends the least amount of time telling the tale of Third Person's most sympathetic characters: Julia and her son. Like Neeson's character in his gilded cell, Haggis strives valiantly to re-create the success of his earlier work, but Third Person ultimately leaves us craving real people.