The best thing about Woody Allen's latest movie is that it's typically short. Yes, Magic in the Moonlight is a trifle, so there's no need for it to be drawn out. But even at a mere 97 minutes the film drags. The plot is not compelling, the writing not surprising and, despite powerhouse actors including Colin Firth, Marcia Gay Harden and Jacki Weaver, we just don't care about the characters. 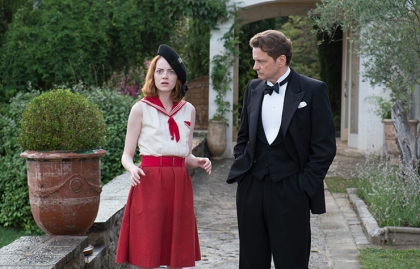 Colin Firth and Emma Stone star in 'Magic in the Moonlight.'

Movie lovers who have followed Allen's career over four decades and 50-plus films know that the writer-director, now 78, has made some brilliant works, among them last year's Blue Jasmine, which earned Cate Blanchett an Oscar. But he also has delivered some clunkers (Everyone Says I Love You, anyone?), and Moonlight is one.

As he's wont, Allen sets his latest romantic-comedy in a luxurious European landscape, with most of the action taking place in the south of France. It's the 1920s, and the David Copperfield of the time, Chinese conjuror Wei Ling Soo, aka Stanley Crawford (the consistently solid Firth), is performing his magic shows to sold-out crowds across the continent. His old friend and fellow magician Howard Burkan (the character actor Simon McBurney of Tinker Tailor Soldier Spy) convinces him to come off the road and join him on a trip to the Riviera to visit his friends, the wealthy Catledge family. Specifically, Burkan wants Crawford, a known debunker of spiritualists, fortune tellers and psychics, to expose as a fraud a young clairvoyant named Sophie Baker (Emma Stone) who is staying with the family.

Baker has come to the Catledge mansion with her mother (Oscar-winner Harden, appropriately playing snarky) at the request of the family matriarch, Grace Catledge (Jacki Weaver, who was so fabulous in Silver Linings Playbook that she was nominated for an Oscar), who believes the girl can put her in touch with her deceased husband. After a séance, she becomes so convinced of Sophie's powers that she agrees to underwrite a foundation Sophie and her mother wish to start. Meanwhile, Grace's son, Brice Catledge (a funny Hamish Linklater of Battleship), has fallen hard for Sophie and is requesting her hand in marriage.

Unsurprisingly, Crawford, after witnessing Sophie in action, begins to wonder if maybe she is the real thing. And, he starts having romantic feelings for her. It's a development entirely predictable, as is much of the rest of the film.

Allen has apparently had a fascination with magic since his childhood, but here, he conveys little of the intrigue and wonder the art of illusion is intended to evoke. And while his characters, including some minor ones like Crawford's Aunt Vanessa (Eileen Atkins of TV's Cranford), are sufficiently quirky, they still come off as one-dimensional. (That is not to say the acting is bad, though Emma Stone borders on annoying in this role, and I don't think that was intended.)

The cinematography in Magic in the Moonlight is a grace note, but it can't save a film in need of a satisfying plot. Could it be that the eye behind Allen's camera lens has lost its view, or that the legend has lost his passion?