Stories drawn directly from the writer's experience offer a distinct authenticity. That's just one of the reasons Love Is Strange rings so true.

Inspired by his observations of close friends and family members in deep relationships — among them his great-uncle Ben Goodman and his partner, the sculptor Ted Rust, together for 45 years — director Ira Sachs has crafted a portrait of two men whose 39-year union will resound with any viewer who has experienced (or witnessed) such a long-term loving relationship. But Sachs doesn't stop there; he fills in the background with other players at various stages of coupledom, from first date to midlife. 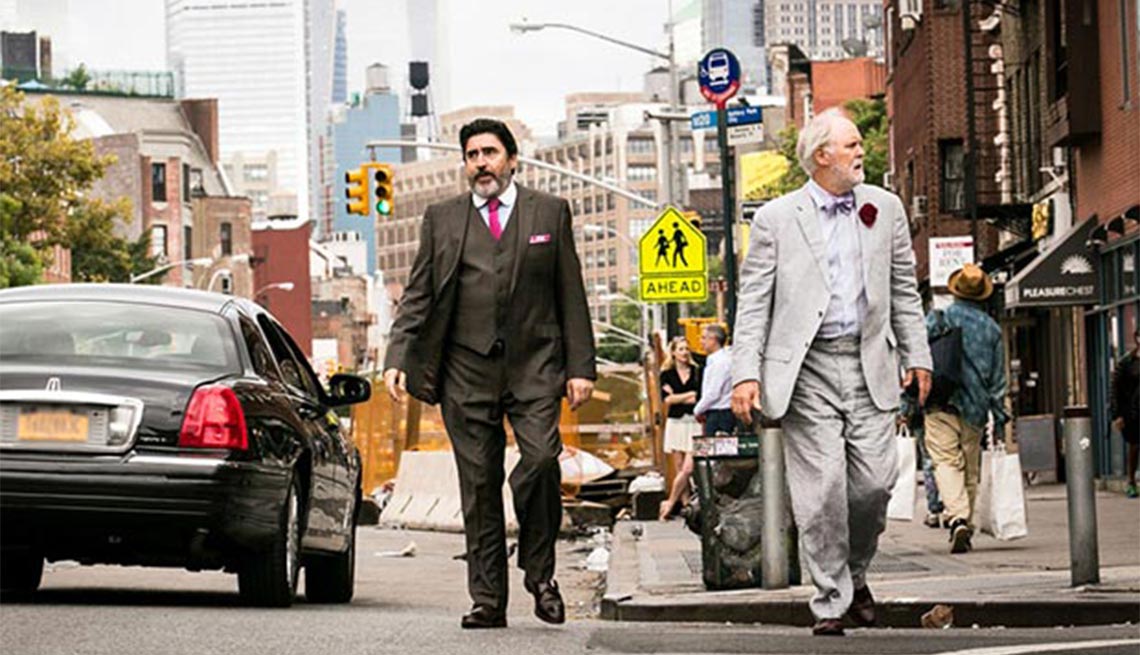 Alfred Molina and John Lithgow brilliantly portray a same-sex couple that cope with trials and tribulations of love, long-term relationships and the reality of life.

Approaching four decades as a duo, Ben (the fabulous John Lithgow) and George (the equally good Alfred Molina) decide to tie the knot at long last when the New York legislature legalizes same-sex marriage. Their celebration is short-lived: The Catholic school where George works as a teacher fires him, deeming the relationship immoral.

Without George's income (Ben is a struggling painter), the couple must sell their Manhattan apartment and find a cheaper place to live — a deft move by Sachs, as it allows the city itself to become a significant character in the film. Until the two men can find a new home together, however, they must temporarily live apart.

George moves one floor down, becoming a lodger in the apartment occupied by two party-hardy gay cops (Cheyenne Jackson of Behind the Candelabra and Manny Perez of Pride and Glory). Ben persuades his nephew Elliot (Darren Burrows, so laconically wise as Ed in Northern Exposure) to let him crash at the Brooklyn home he shares with his writer wife, Kate (three-time Oscar nominee Marisa Tomei). There Ben is relegated to sleeping in the bunk bed below their son, Joey (Charlie Tahan, recently in Blue Jasmine). These make-do measures spark tensions within both sets of guests and hosts, while George and Ben struggle with the sadness of their separation.

Sachs, who wrote the script for Love Is Strange with Mauricio Zacharias (also his collaborator on 2012's Keep the Lights On), admirably avoids preaching to the audience or striking an overtly political stance. Instead he keeps the focus on the characters and their relationships. Scenes unfold organically, sometimes jumping subtly forward in time, the cityscapes made even more beautiful by the Chopin études playing beneath them.

I have to say that Sachs' casting choices are brilliant here: Lithgow and Molina, social acquaintances for years in real life, display a tender — and utterly believable — intimacy on screen. Tomei is equally convincing as a working mother dealing with an inattentive husband and an often surly teen (that would be Tahan, who portrays the agony and ecstasy of adolescence to perfection).

Though Love Is Strange overflows with modern-day hot buttons — marriage equality, orientation prejudice, income disparity — those issues are never allowed to crowd out the movingly genuine people at the heart of this timeless love story. Sachs has given us a delightful film that exquisitely demonstrates how, despite our differences, we are inexorably drawn to one another.