The Judge takes up a familiar story (the prodigal son) in a contemporary way, plumbing the complexities of family dynamics so that viewers of all ages can relate.

Its powerful script draws on the real-life experiences of director David Dobkin, known until now for a very different kind of movie: Wedding Crashers. Layered with subplots about sibling rivalries, first-love reunions and small-town politics, The Judge authentically re-creates the experience of an adult returning to his childhood home (or trying to). Award winners Robert Duvall and Robert Downey Jr. turn in brilliant performances — the two men have terrific chemistry playing a father and son who've lost theirs — and the supporting cast brings nuance to a range of intriguing secondary characters. 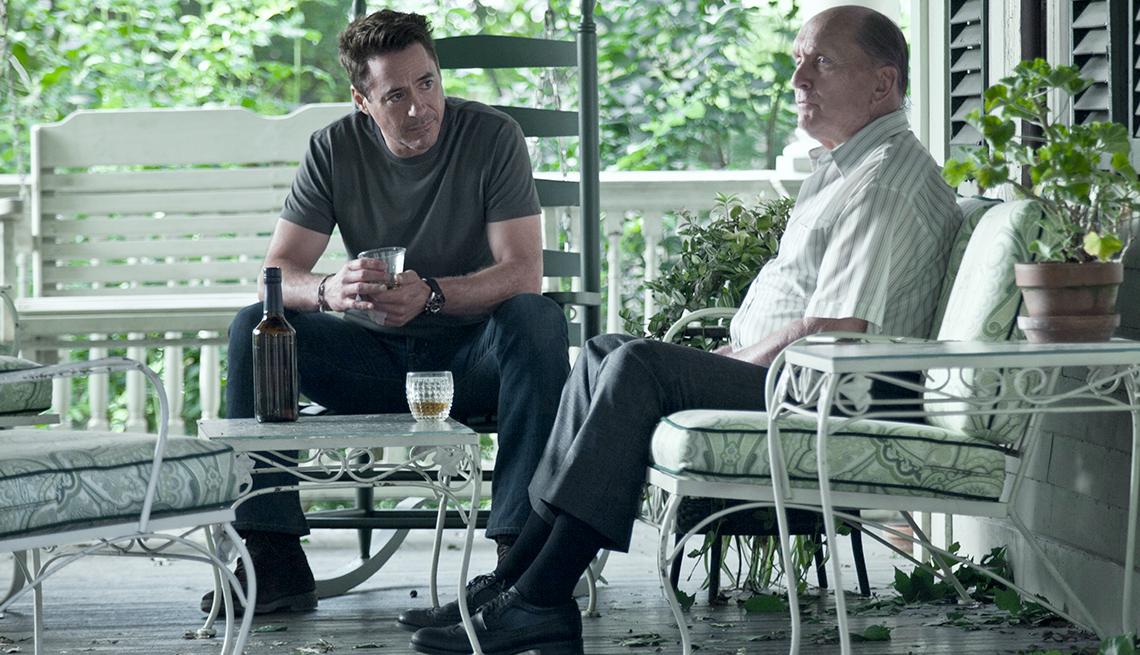 “The Judge,” starring Robert Downey Jr. and Robert Duvall, proves to be a grownup film about forgiveness.

The Judge takes place in one of those eternal towns in middle America — the fictional burg of Carlinville, Ind., where a well-respected criminal court judge, Joseph Palmer, and his wife raised three boys. The oldest, Glen (beefy Vincent D'Onofrio), runs a tire shop in the wake of a tragic accident that dashed his big-league baseball dreams.

Hank (Downey, thankfully displaying his immense talents in a genre other than action) is the smart rebel who fled Carlinville years ago after constantly clashing with his rigid and overbearing father.

Dale (Jeremy Strong of Zero Dark Thirty), the cognitively challenged youngest brother, still lives at home. He's able to interact with others only by filming them with the old Super-8 camera that he carries everywhere.

Joseph, known as "Judge," isn't about to welcome his estranged middle son back into the fold; wife buried, he dismisses Hank with nary a handshake. And with Hank declaring that "Nobody wants to go to Carlinville — everyone wants to leave," détente between these two looks distant indeed.

But Hank has recently learned that his spouse (and mother of their 7-year-old daughter) has been cheating on him, so he's in no particular hurry to return to the Windy City. And Judge, who's been having unexplained memory lapses, takes his first drink after years on the wagon, then winds up in a barroom confrontation with a ne'er-do-well he once sent to prison. Next thing you know there's a body on the road and blood on a Cadillac bumper, and Judge has landed on an unfamiliar side of his old courtroom bench.

The case hinges on whether Judge's hit-and-run was accidental or intended. In comes prosecutor Dwight Dickham (a slick Billy Bob Thornton) to throw the book at him, whereupon Judge — growing increasingly frail through age and circumstance — finally allows Hank to defend him.

Dobkin could have shaved 20 minutes from this film. But much of the beauty of The Judge lies in how deftly he softens his main characters. Helping to engineer this shift is the main female presence in the story, Hank's high school sweetheart, Samantha (a perfect casting choice in Up in the Air's Vera Farmiga, who gives her character a sassy free-spiritedness). She gets to Hank's heart once more, reminding him that a relationship — including the one between a father and son — must be a two-way affair.

There's enough blame in the Palmer family to cover Carlinville a foot deep. The reasons for its existence — the cause, for example, of Glen's career-ending mishap, or what happened in the months after Hank blew town — are revealed in surprising ways. The Judge proves to be a grownup film about forgiveness, not to mention an encouraging reassurance that letting go of recriminations from the past can heal yourself and others.