Not that Nolan disguises his homage to Kubrick. In his choices of imagery (rotating space stations, a climactic psychedelic freak-out), plot devices (mysterious messages from space; pod doors that won't open) and even music cues (an echo of the crashing final chord from Also Sprach Zarathustra), Nolan harks back time and again to the 1968 film that redefined space-based science fiction. 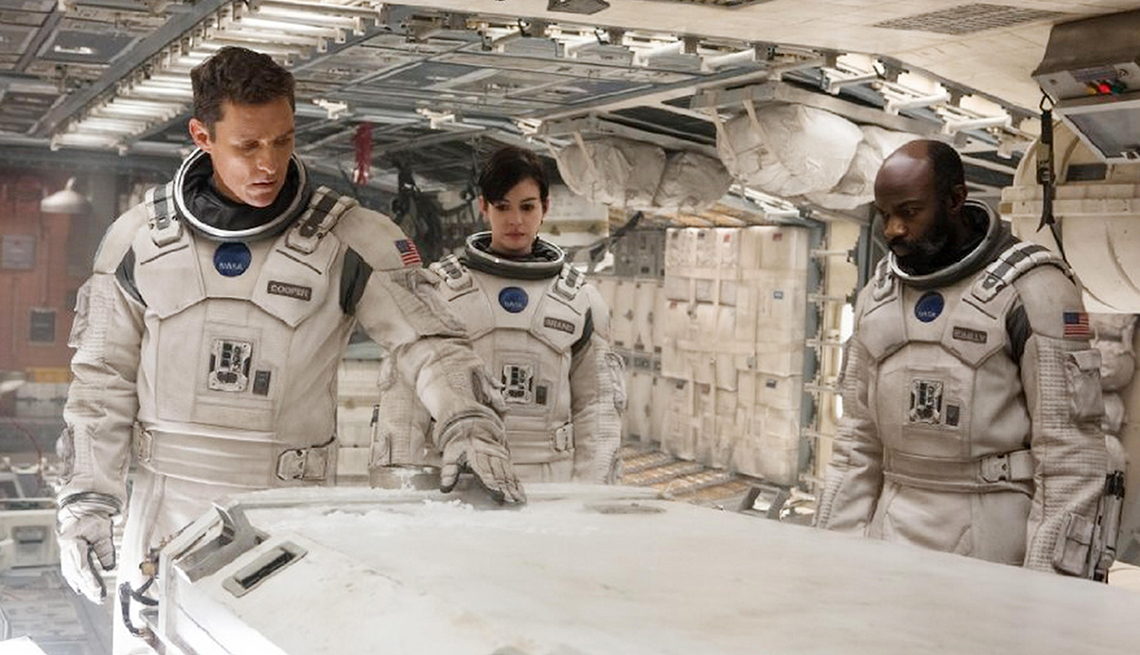 Earth is doomed in “Interstellar,” and Matthew McConaughey, Anne Hathaway and David Gyasi are among those on a mission to find another planet to call home.

That's not a bad thing. But I had settled down in front of Interstellar's Imax screen expecting Nolan to boldly take me where no film had gone before. In his voyage from the Earth's orbit to Saturn to the center of a black hole, Nolan leads us on a road trip down well-worn Scenic Route 2001.

Matthew McConaughey plays Cooper, a former NASA astronaut-turned-corn farmer. A devastating famine has struck the planet, we gather, turning Earth into a giant dust bowl. Virtually all technology has been abandoned, save the kind that enables farmers like Cooper to grow food. What's more, Earth's inhabitants seem to have become aimless nomads, using their pickup trucks — loaded with belongings and dirty-faced children — to stay one step ahead of the billowing dust clouds.

Cooper's daughter Murph (adorable Mackenzie Foy) keeps complaining about poltergeists in her farmhouse bedroom, and together father and daughter discover that whatever is causing the ruckus has left them the map coordinates of a location nearby. Following these spooky directions, they find the hidden headquarters of NASA, which has gone underground — literally — in the face of a society that angrily rejects any use of technology that does not put food on the world's tables.

With Earth slowly running out of oxygen and the planet doomed, NASA is now essential. As explained by a scientist named Professor Brand (Michael Caine), NASA's new mission is to find an alternative planet where the surviving population can live — or, failing that, a safe place in space to deposit a stash of human embryos. All NASA needs is an astronaut to pilot the launch, and suddenly here's Cooper, standing on the agency's welcome mat.

So Cooper waves goodbye to his daughter, son and father-in-law (John Lithgow) and climbs aboard humankind's last hope, a rocket named Lazarus. Their destination: A "wormhole" near Saturn, a crease in the time-space continuum through which an earlier team of explorers disappeared, sending back data about three promising planets before falling silent. The Lazarus crew — consisting of two other guys (Wes Bentley and David Gyasi) and Professor Brand's daughter (Anne Hathaway) — will head through the wormhole to visit the three contenders. If one is habitable, the crew will return with the data needed to guide more Earthlings there, or stay put to plant those embryonic seeds. (Which raises an indelicate question: Why, then, send just one woman?)

And oh, yeah: The three planets are near a black hole, where time slows to a crawl compared to its passage on Earth. (An hour there? Seven years here!) Thanks to some intergalactic Skyping, Cooper is able to watch his kids grow up and make him a grandfather — leading to the film's most emotionally stirring scene.

If you're keeping score, so far Nolan has cribbed from 2001, Close Encounters of the Third Kind, Contact, The Grapes of Wrath and possibly even The Rise and Fall of Ziggy Stardust and the Spiders From Mars (David Bowie's 1972 album set in a world with only five years to survive). Oddly, although the plot is exponentially more fantastic than last year's space opera Gravity, Nolan's adventure seems far more plausible than that earlier film. Gravity lined up obstacles for its heroine solely to make the movie run longer. In Interstellar, by contrast, plot points arise organically even when they double back on one another.

Like 2001 and Gravity, Interstellar impressively translates to the screen the awesome beauty and cold-blooded brutality of space. On his huge canvas, Nolan flips impressively between the endless expanse of the cosmos and the claustrophobic confines of a spaceship. He provides tantalizing looks at the crew's destinations, be they the Himalaya-sized waves of a water planet or the brittle frozen clouds of an ice world.

Uncharacteristically, Nolan leaves some plot points unanswered. The film opens with Cooper awakening from a dream in which he relives an airplane crash, but its significance to the story remains unclear (to me, at any rate). And though we get a reasonable (if far-out) explanation for Murph's poltergeists, the source of those map coordinates — you know, the ones that set the entire plot in motion? — is never really explained. It's not for lack of time: At nearly three hours, Interstellar occasionally makes us feel that we too have been transported to a planet where time stands still.

Nolan has been dinged in the past for failing to imbue his films with authentic humanity. This time out, however, he coaxes truly affecting performances from his cast, especially as we witness their yearning to rejoin the people and places they love. Kubrick, for his part, was either uninterested in such displays or unwilling to go there in 2001. Still, whereas 2001's characters seemed as cold as the depths of space — from the film's caveman prologue to its star-child finale — it posited space exploration as an inevitable outgrowth of human curiosity.

Nolan's Interstellar waxes poetic about the universality of love and lingers beautifully on worlds beyond ours. But in the end his film tells us that space is the place to go when you've used up the planet you happen to be on.

Nolan may be right. But on that score Kubrick, surprisingly, turns out to be the romantic.