Early on in Heaven Is for Real, the new movie based on the best-selling nonfiction book about a couple whose young son insists he's been on a trip to heaven, the youngster's father, played by Greg Kinnear, rolls up a garage door to reveal a vast expanse of Nebraska plain.

In its stark simplicity, the sight of a dingy garage interior giving way to a blindingly bright, endless horizon is a strikingly beautiful image. It's also a nifty allegory for the story itself, as the child in question tells of momentarily slipping from the confines of mortal existence and entering a supernatural realm of singing angels, billowing clouds and a personal sit-down with Jesus. 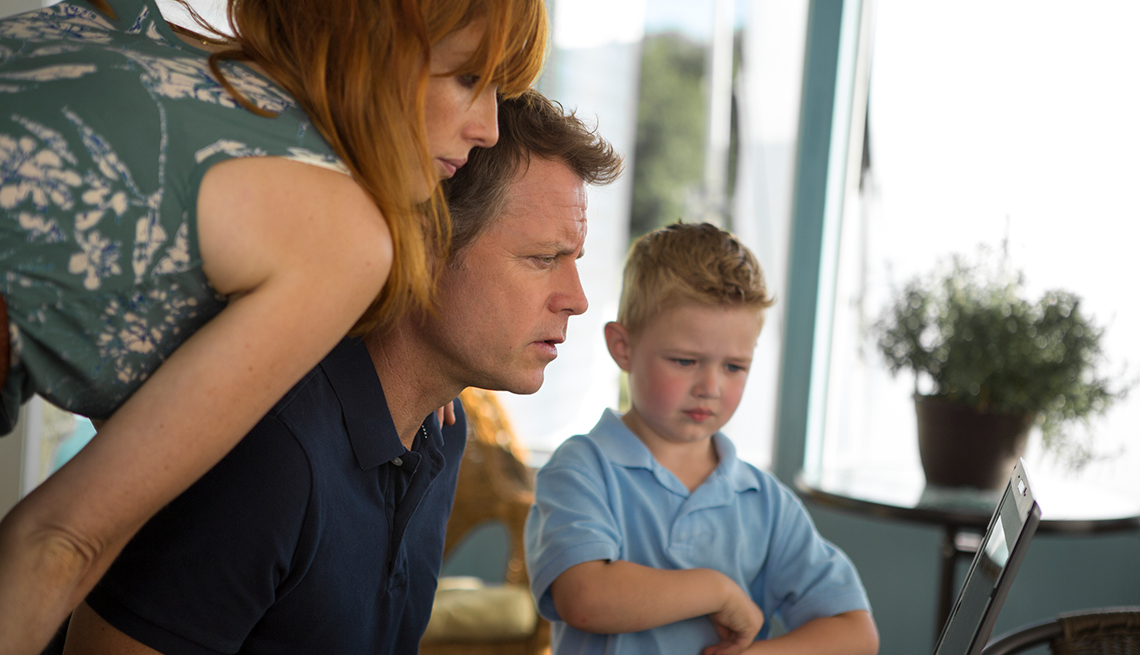 Kelly Reilly, Greg Kinnear and Connor Corum star in movie based on the bestseller "Heaven Is for Real."

The millions of people who've read Heaven Is for Real know the details: When Todd and Sonja Burpo's 4-year-old son Colton suffers a burst appendix, doctors make it clear he may not survive.

He does recover, but a few months after returning home, Colton begins to tell his parents strange stories about having visited heaven while he was near death. At first Mom (Kelly Reilly) and Dad dismiss the accounts with a wistful smile, but when Colton starts filling them in with details about the people he met — including long-dead relatives he was too young to know about — the pair begin to wonder if their son did indeed punch a round-trip ticket to paradise.

Blog: Meet the real Heaven Is for Real family

Clearly aimed at the Bible-believing movie audience that has made smash hits out of films like The Blind Side and Noah, Heaven Is for Real is, nevertheless, no piece of Sunday school time-filler. Todd and Sonja are slow to come around to accepting what Colton (adorable Connor Corum) is telling them. And some friends are out-and-out hostile to the idea, particularly when Colton's word pictures don't jibe with the images they've come to expect of the afterlife.

Although Todd's job installing garage doors is what puts food on the Burpo family's table, he is also pastor of a local church. When he begins to talk from the pulpit about Colton's experience, the reaction from the pews isn't exactly overwhelming. In fact, as word gets into the press about the whole thing, some of the faithful start calling for the pastor's head.

The truth is that Todd is as conflicted about Colton's story as his flock is. He tries mightily to find a psychological explanation, even visiting a university professor who assures him the whole thing is the figment of a very intelligent child's imagination. Smartly, director/cowriter Randall Wallace (Secretariat, Braveheart) peppers Heaven Is for Real with the voices of several such skeptics, each popping up at strategic moments to give voice to the very questions a thoughtful audience will ponder.

Those expecting a full-frontal computer-generated heavenly extravaganza may be disappointed with Heaven Is for Real: Our glimpses of the beyond are fleeting and, like Colton's family and their friends, we are often asked to take the boy at his word.

It's a wise decision by the filmmakers, though: As we learn more about what Colton saw during his journey, we begin to understand what his father tells the congregation during the film's climactic showdown: Colton saw the heaven that God knew he'd understand, making his glimpse not all that different from the ones we get in our everyday lives, be they in the eyes of a loved one or in a glorious sunset — or in a Nebraska plain stretching to infinity.

Kinnear and Reilly are pretty irresistible as Colton's parents; few actors deliver lines as effortlessly as Kinnear, and his scenes with young Corum seem like overheard conversations — no small feat when it comes to working with very young child actors. Reilly — who most of us last saw as the druggy prostitute who helps save Denzel Washington from himself in Flight — is radiant as a mom and wife who fears the controversy will destroy her family, but who also desperately wants to believe in her husband, her son and the remote possibility that this may all indeed be true.

A top-notch supporting cast is led by Thomas Haden Church as Todd's cranky-but-gold-hearted best friend and Margo Martindale as the church lady who first leads the charge to get Todd fired — then comes to realize the real motivation behind her resistance.

"Some people might be afraid to believe," Todd sighs at one point. The triumph of Heaven Is for Real is in the film's embrace of the very down-to-earth notion that such fear can even lurk in the hearts of those who have faith.