If George Clooney showed up on your doorstep one day and invited you to join him in rescuing stolen artworks from Nazi looters, you’d go, wouldn’t you?

Poll: Clooney is a sexy boomer. But, is he the sexiest? Vote now!

Yes, it would involve heading into a war zone, and one or two invitees would probably not make it back alive. But this is George Clooney, for crying out loud — at least, it’s George Clooney playing Frank Stokes, the art curator deputized by FDR to rustle up a team and get to work. 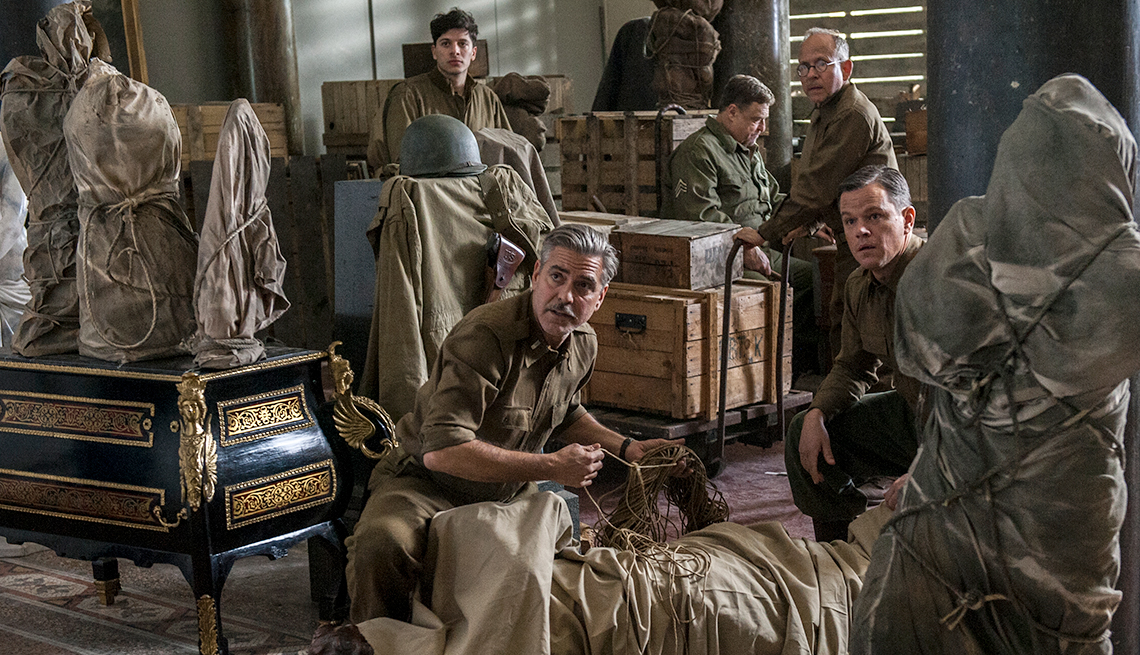 Experts in various fields of art, "The Monuments Men," including George Clooney and Matt Damon, are in a race to save history.

That’s the plot of The Monuments Men — the true story of a group of gallant artists, curators and academics who went through basic training, took up arms and headed into the maw of occupied Europe to track down stolen statues and pilfered portraits.

You couldn’t spend two hours with a more agreeable group of movie stars: Clooney’s sidekicks include Matt Damon, John Goodman, Bill Murray, Bob Balaban and Downton Abbey patriarch Hugh Bonneville. History tells us there were Monument Women as well, and they’re represented here by Cate Blanchett as a former member of the French Resistance who helps guide the team to the Nazis’ stolen art cache. (She’s also a powerful temptation for Damon’s character, a stand-up guy who’s determined to stay true to his wife back in the States).

Clooney directed and co-wrote the movie, so let’s give the guy credit for successfully pulling off its Ocean’s 11-meets-The Dirty Dozen vibe. But he also bears responsibility for a certain lack of urgency in these proceedings. His character does give a few moving speeches about the importance of preserving cultural treasures; when it comes to eliminating a race, he seems to be saying, erasing its heritage is even more effective than genocide. Yet even with Hitler’s looming threat that all stolen art would be destroyed should the Reich fall, Clooney fails to move us to the edges of our seats.

That leaves us with a series of set pieces, each rewarding in its own way: Bonneville’s disgraced British officer making a last stand in defense of a Michelangelo; Bill Murray’s architect moved to tears as he hears a recorded message from his family; Damon and Blanchett’s characters sidestepping their mutual attraction in a candlelit Parisian flat; Clooney’s war-weary officer facing off against a smug captured Nazi war criminal.

With modern wars so often fought by Other People’s Kids, these vignettes — some of them adapted from Robert Edsel’s series of books about the Monuments Men — are a potent reminder of a time when people from all walks of life rallied to battle. The Monuments Men is a fine way to honor that sense of universal duty.