Something feels wrong about slipping on 3-D glasses to watch a Bible saga.

But that's what moviegoers must do to experience the latest action-packed epic from Ridley Scott (Blade Runner, Alien, American Gangster). The special-effects wizardry of Exodus: Gods and Kings opens with a grand battle scene in which horse hooves, chariot wheels and human bodies appear to tumble off the movie screen and right into our popcorn buckets.

Raised as brothers, Pharaoh Ramses II (Joel Edgerton) and Moses (Christian Bale) come to a parting of the ways (the sea) in "Exodus: Gods and Kings."

Two-and-a-half hours later you may feel exhausted, as I did, at having endured the 10 plagues of Egypt, during which locusts and flies buzz straight at your head, frogs seem to catapult into your lap, unsuspecting fishermen get bitten in half before your eyes (to turn water into blood), hail the size of crocodile eggs pelts the Egyptian population and, well, you get the picture.

Though Scott's artistry brings a biblical apocalypse to life — even, perhaps, giving a realistic taste of God's wrath — his dramatization is so relentlessly showy that viewers may smirk in disbelief.

The most cataclysmic scene — the one previewed in all those movie trailers and commercials — is the wall of water that swallows the army of Pharaoh Ramses II as the Red Sea fills back in. In Scott's vision, the sea doesn't part à la The Ten Commandments. Rather, the tide simply goes out and out and then out some more, allowing Moses and half a million slaves to cross to safety. Then, with the soldiers of Ramses in hot pursuit, the sky blackens with more waterspouts than a season of Storm Chasers and the sea rushes back in with a vengeance, treating viewers to a graphic 3-D view of underwater carnage. 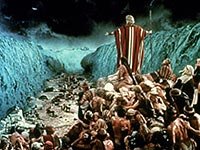 Movies inspired by the Good Book are all the rage this year, but these 10 classics remind us, they have a high standard to meet

At the center of the story, Christian Bale (as Moses) and Joel Edgerton (as Ramses) both give worthy performances. The film begins with them as adults, raised as brothers in the pharaoh's palace; Moses' arrival as a baby in a floating basket is recounted in expository dialogue. Much has been made of Scott's decision to use white actors to play Middle Eastern characters. But frankly, most of the supporting players get so little screen time, the choice seems hardly worth discussing.

The other notable names — Ben Kingsley as the Jewish elder who clues in Moses to his real lineage, Breaking Bad's Aaron Paul as Joshua, and Sigourney Weaver as Tuya, the mother of Ramses — are granted mere moments before the camera. Indeed, Weaver — decked out in a wig and costume worthy of Cleopatra — is unrecognizable until she speaks.

And then there's God. Rather than depicting the deity as a deep, disembodied male voice, Scott has chosen to portray Him in the form of an 11-year-old actor with a British accent. While Moses can see God (and speaks to him at key moments, such as during the chiseling of the stone tablets), Moses' closest advisers see only their leader talking to himself, leaving us to contemplate the mysteries of faith — and CGI.

In the end, however, you may ponder a couple of more modern questions: Why would anyone spend a reported $140 million to remake Exodus, who will go to see it, and where, in a season crowded with musicals and awards bait, does a biblical epic fit in?