En español | Cesar Chavez should have been a grand film about an important and charismatic figure whose struggle to organize America's migrant field workers still resonates loudly today. Think The Grapes of Wrath, or Gandhi, or Reds. Yet actor-turned-director Diego Luna leaves moviegoers underwhelmed by this somewhat academic recounting of a historic movement, giving us a largely one-dimensional portrait of a leader who was complicated and compelling in real life.

Cesar Chavez the man was willing to sacrifice his health, his safety and his family to advocate for a disenfranchised population. He went up against racist lawmen and self-important moneyed landowners. It's the stuff of high drama, but Luna's sophomore feature directing effort sadly lacks that very element. 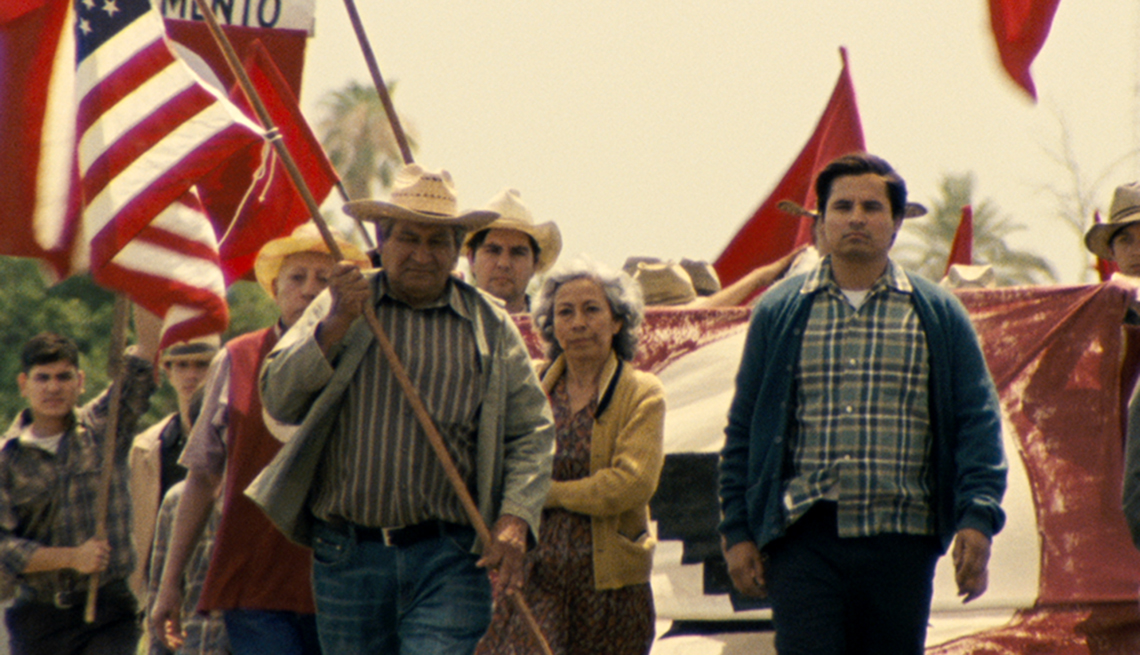 Michael Peña in "Cesar Chavez" stands up for the rights of farm workers.

Luna's feature filmmaking debut, the quirky family drama Abel, showed us his promise behind the camera. And the Mexican-born actor clearly felt passionate about the Chavez project, wisely choosing not to re-create the man's entire life story. Instead, Cesar Chavez focuses on the five-year period, beginning in 1962, when the community organizer returned to the fields of central California, where he had started working with his family at age 11.

Fresh from the Community Service Organization, a Latino civil-rights group, the grownup Chavez (Michael Peña) and activist Dolores Huerta (played by an uninspired Rosario Dawson) reconnect with the fruit pickers and launch the United Farm Workers (UFW) union. Somewhat laboriously, the film recaps how the pair built on each success they notched: targeting grape growers around the town of Delano; marching to Sacramento; calling for a worldwide grape boycott, which won the support of Sen. Robert F. Kennedy; and eventually pressuring the growers to grant fair wages and better conditions. Drawing parallels to today would have enriched this material, but that never happens.

Written by Keir Pearson (Hotel Rwanda) and Timothy J. Sexton (Children of Men), the script lacks the highs and lows Chavez went through on his journey. Part of the problem is the overly saintly portrait of the UFW's cofounder.

We watch unmoved as Chavez endures a 25-day hunger strike to convey his commitment to nonviolence (at a time when others in the movement were urging armed resistance). And it's hard to believe that Fernando, oldest of the Chavez children, would feel so wounded by his father's dedication to the cause — one of the few moments of interpersonal conflict in the film.

Might a more seasoned player have overcome these script doldrums? Peña is a fine character actor; he pulled off compelling portrayals in films such as Million Dollar Baby, Crash and, most recently, American Hustle. But as Cesar Chavez, Peña comes off as too young, too slight, too dispassionate.

In the scenes they share, America Ferrera — playing Chavez's fiery wife, Helen — overshadows Peña, and that's saying a lot. John Malkovich, as a stubborn grape grower, and Michael Cudlitz, as the sheriff of Delano, make intriguing, if imperfect, casting choices.

The Cesar Chavez saga was ripe for big-screen treatment — kudos to Luna for taking it on — but this version feels like a better fit for television. That leaves plenty of fruit on the vine for some filmmaker down the line to give it the epic treatment it deserves.