Remember that big-hearted lady from your youth, a friend of your mother's, perhaps, who would shake her head knowingly and say things like, "There's no such thing as bad children ... only children who do bad things." 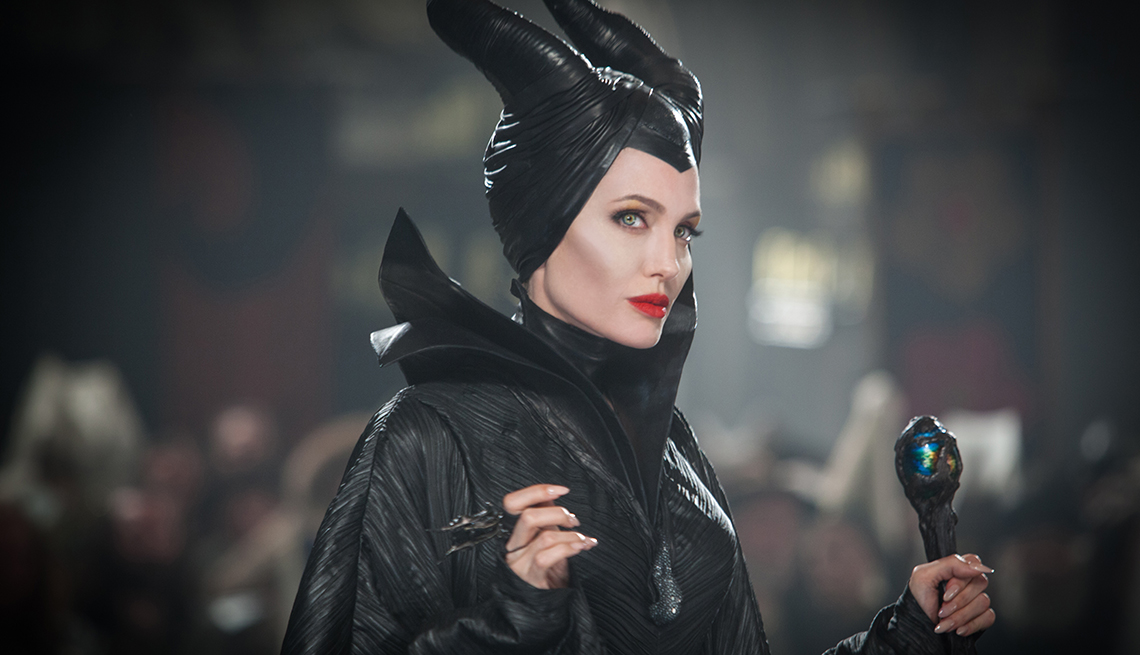 Angelina Jolie, as the evil fairy Maleficent, in Disney's new retelling of the classic Sleeping Beauty

Well, guess what? That sadly misguided woman must now be among the suits running Disney, which seems to be in the process of explaining to new generations that movie villains aren't really villainous; they're just misunderstood. That was the case of the "evil" sister in last summer's animated hit Frozen, and it's the same story in Disney's new live-action spectacle Maleficent, a retelling of the studio's 1959 classic Sleeping Beauty -— a fond movie memory for many a boomer.

In this case, Maleficent takes one of Disney's most gleefully psycho baddies (played by Angelina Jolie, lips in full flower and her already-angular cheekbones honed to razor sharpness by computer tweaking) and rationalizes away all her meanness as the result of a horrible betrayal at the hands of Sleeping Beauty's sociopathic dad (Sharlto Copley). In fact, Maleficent almost immediately regrets that prick-your-finger-and-sleep-forever curse she puts on the beautiful daughter, but because of some small print she added to the spell, it's irrevocable.

So she watches the little girl grow up, first from the shadows and then as a friend, knowing what fate awaits on her 16th birthday.

Along the way there are some Lord of the Rings–knockoff battle scenes between the evil humans — who live in a dark, gnarled land cursed by corrupt political leadership — and the good-hearted fairies, who live as one with nature, share everything, and need no government whatsoever ("Fairies of the World Unite!").

As the sleeping princess Aurora, Elle Fanning is asked to do little more than hold out her finger and smile as computer-animated fairies land on it. Copley is just plain weird as her dad, never giving an inkling of why his character is such a jerk. Jolie, on the other hand, is the reason to go see the movie in the first place, and she is mesmerizing in the title role. As the inevitable climax approaches, especially, she summons up a truly moving performance as a woman who is haunted and horrified by what she has done. She'd be an early Oscar contender if the rest of the film were not so aggressively lame-brained.

With Maleficent, Disney continues to mine its vault for new live-action movie gold. Angelina Jolie is just the latest of our most acclaimed actresses to have taken a storybook villainess and made her frighteningly real. Here's a look at four Oscar winners or nominees who have relished taking cartoon evildoers into live action, beginning with Jolie.

The new Wicked-style fantasy reveals why Maleficent went to the dark side early in life. "She is bigger than me," says the star about playing an icon from her childhood. "She's on a different level of performance than I have ever done. She's very still. She's very sure of herself."

Fun fact: Of all Disney's cartoon creations, "She was just my favorite as a little girl," Jolie has said. "I was terrified of her but I was really drawn to her. I loved her."

Glenn Close, who famously boiled a pet bunny in 1987's Fatal Attraction, was the perfect choice to embody the fashion-forward dog-snatcher in the 1996 remake of 101 Dalmatians — although Sigourney Weaver was briefly offered the part when there was a potential conflict with Close's Broadway run in Sunset Boulevard.

Quoteable: Close has said of her character: "Cruella's the devil. She has no redeeming qualities about her." The star repeated the role in a 2000 sequel, 102 Dalmatians.

The story continues: An original film, Cruella, is in the works.

The longtime British companion of director Tim Burton, Helena Bonham Carter is the Red Queen in his 2010 smash remake of Alice in Wonderland. Her irascible ruler is a combo of the Red Queen and the Queen of Hearts. She was hoping to be cast as her royal pain's younger sister, the daft yet lovely White Queen (Anne Hathaway). Instead, the actress has said: "I'm the large, oversized-head person," an effect created digitally in postproduction. "It's great fun playing it, but it's exhausting losing your temper. She is age 2 in emotional control."

Fun fact: Bonham Carter has said she based her performance on hotel mogul Leona Helmsley (aka the Queen of Mean) as well as her own daughter, Nell, now 6.

The story continues: A live-action sequel, Through the Looking Glass, is planned for May 2016.

Cate Blanchett will take on the role of Cinderella's stepmother, and director Kenneth Branagh has said it will require the Australian star to be witty as well as manipulative in the April 2015 release. As for anyone who thinks the gorgeous actress will be playing a gray-haired crone, Blanchett herself has set the record straight: "Someone said I was playing the ugly stepmother. I said, 'No, no, there's no ugly about it. She's wicked!' "

Fun fact: As the Fairy Godmother, Helena Bonham Carter plays a rare character that is a force for good — and who just might possibly butt heads with Blanchett.