Two new comedies dip into the generation gap for their laughs this Christmas season, and while one is decidedly more successful than the other, either one would be a fun diversion from the actual rifts that might appear around your holiday table this year.

Parental Guidance is simply the funnier of the two films, maybe because it has less to prove. Billy Crystal and Bette Midler play grandparents (and just saying that makes you chuckle a bit) to a brood of overprotected kids. When Grandpa and Grandma are asked to watch the children for a week, humor — and sometimes hilarity — ensue.

The Guilt Trip, starring Barbra Streisand and Seth Rogen, crams our protagonists into a compact car, basically mounts a camera to the hood and lets the two have at it. They play mother and son embarking on a cross-country car ride, and the funny bits arise from Barbra being Barbra and Seth being Seth.

You can see the contrast right away. If you have kids and you live long enough, you will (trust me) be asked to watch your grandkids, and for a good deal of the time you won't know what you're doing. On the other hand, chances are slim indeed that your grown child is going to pop by one day and invite you to spend the next week with him driving cross-country.

The laughs come so easy in Parental Guidance it doesn't seem fair. (Perusing the photographs on their daughter's mantelpiece, Bette finds the lone picture of herself and Billy tucked behind all the others, and she gasps, "We're the other grandparents!") The kids can't eat sugar, so of course Grandpa feeds them cake. The T-ball league doesn't keep score, so Grandpa gets into a fight with the ump. Driving the kids to school, Grandpa can't unbuckle the darned car seat, so he simply removes the seat, kid and all, and hands it over to a befuddled teacher.

Crystal and Midler are a delight, and the kids are cute. Parental Guidance won't win any Oscars for anyone, but I'd rather spend 90 minutes with these guys than three hours with Les Misérables' Jean Valjean any day.

The Guilt Trip could use some easy laughs, but instead it works hard for those it gets. Screenwriter Dan Fogelman can be very clever when he's writing for cartoons (Cars, Tangled, Bolt), and his ABC sitcom The Neighbors, about a cul de sac occupied by space aliens, is among the freshest things on the air. 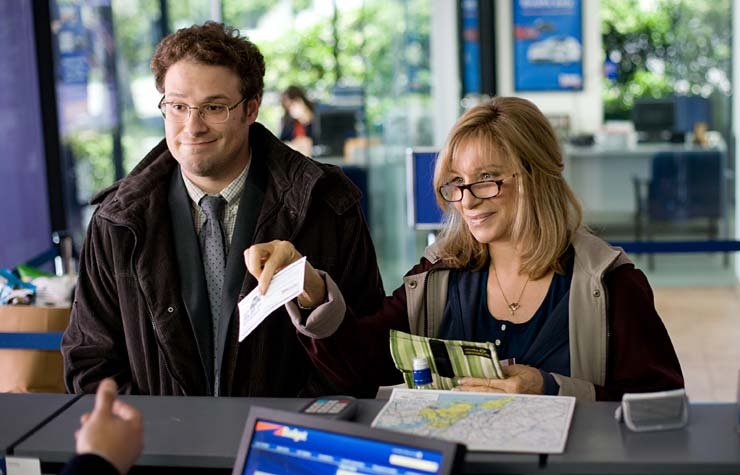 Seth Rogen and Barbra Streisand star in "The Guilt Trip."

But cartoon cars and TV aliens aren't real humans, and neither are the characters Fogelman has written for Streisand and Rogen. Both stars are appealing, and they give this awkward premise everything they've got, but not for one second did I forget they were reciting words of a script and encountering contrived circumstances devised solely to spark another snarky exchange.

On the other hand, it is very, very good to see Streisand working in a comedy. She could have been one of the great comic screen actors of all time (Exhibit A: The Owl and the Pussycat, circa 1970), but that singing thing got in the way. Even here, there's still the shadow of a diva hanging over her: If you do the math, based on when Rogen's character was born, Babs' character in The Guilt Trip ought to be, at the oldest, in her early 50s. Granted, Streisand is one great-looking 70-year-old, but really … .

Visit the AARP home page for exclusive deals and benefits