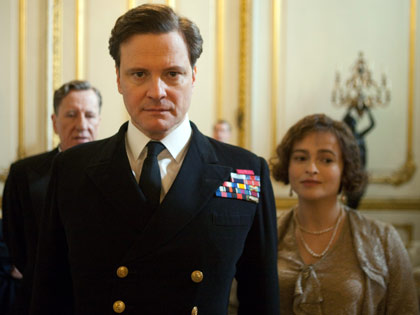 En español  |  A convergence of inspired direction, breathtaking performances and a compelling true human drama, The King's Speech is as close to perfect as any film you'll see these days. The story of England's World War II King George VI and his heroic battle against a speech impediment, the movie makes a pretty good argument for retaining Britain's royal family; I'd say they're worth it so long as they keep inspiring screen narratives like this every 50 years or so.

Speak Out!
Have you seen The King's Speech?  What is your opinion of this movie? Comment below or join the Movies for Grownups community to discuss this and other great (and not so great) films.

The King of England's second son (Colin Firth) has a problem: He stammers. And the imperious king (Michael Gambon) doesn't help matters much by bellowing things like, "Spit it out, son!" The prince very tentatively visits the office of a speech therapist named Lionel Logue (Geoffrey Rush), and very nearly walks right out again, because Logue is as much a psychologist as he is a speech coach. As such, Logue insists on calling the prince by his family nickname and keeps prodding to learn the inevitable childhood trauma that is at the root of the speech problem.

The pair's sparring provides the great fun of The King's Speech; Logue is unflappable in the face of his patient's superior airs, and the prince's mounting exasperation gives way to grudging admiration. The two stalk each other around Logue's office, like boxers looking for an opening, landing verbal blows and throwing up emotional blocks as each tries to achieve dominance. Firth, his baby face creasing nicely into middle age, evokes authority and vulnerability; Rush, his face a topographical map of hills and crevices, emits an aura of supreme calm and endless patience.

Slowly, as Logue excavates closer to the prince's painful past, The King's Speech takes on a less combative tone and veers toward the tragic — a tricky transition wonderfully handled by director Tom Hooper and writer David Seidler. As the verbal jousting subsides, and the prince confides his darkest secrets, the true genius of Firth's performance becomes apparent. Haunted, ashamed, bitter, the prince pours out his story to the stunned Logue. But we as an audience are oddly unsurprised by the sad tale. It's as if we could sense, if not the details, then the broad outline of what happened to him — because we've been seeing it in his eyes, in his demeanor, from the moment we first met him onscreen. Firth is not just playing the middle-aged prince; he is inhabiting the man's entire lifetime, transmitting it to us as if by some subliminal power. Screen acting gets no better than this. But then again, Rush manages to keep pace with his costar, bristling with authority and confidence, even when, late in the game, he turns out not to be all his famous client thought he was.

There are splendid supporting players as well: As the prince's wife, Helena Bonham Carter provides a nice mix of stiff-backed royal and loving wife. Gambon is infuriating as the old king, and as George's self-absorbed brother King Edward VIII — the one who abdicated to marry the twice-divorced "woman I love" and thus thrust his horrified younger brother onto the throne — Guy Pearce is downright creepy.

As the title suggests, the film's climax revolves around a speech, a few hundred words the new king was required to read upon his ascension to the throne. History has recorded that the king's hard-won elocution inspired his countrymen not only on that day, but all through the dark years of World War II. In an age when the world seems to insist that its princes and princesses be nothing more than shallow, blow-dried hellions, The King's Speech reminds us of a time — not long ago at all — when substance counted for something, and admiration, even among those born to privilege, had to be earned.