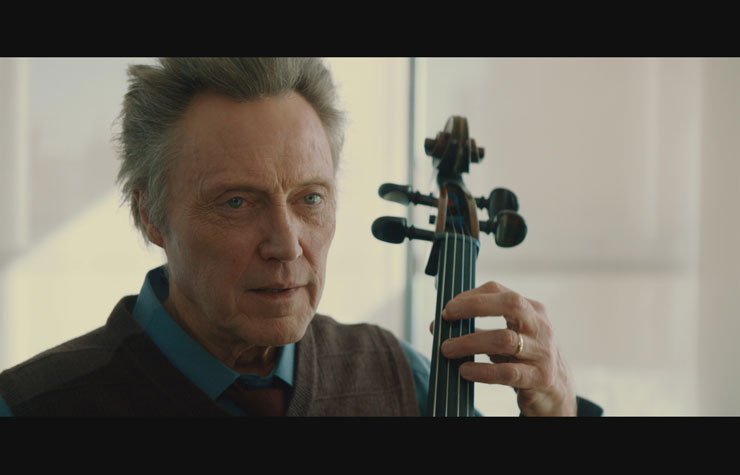 Christopher Walken is cellist Peter Mitchell in 'A Late Quartet.'

A movie about music and marriage (not just between husband and wife, but between individuals who come together for a shared purpose), A Late Quartet is one of those films that speaks specifically to a mature, seasoned audience. Though the directing is at times heavy-handed and the characters overly serious, the story is quiet and true. And the cast could not be better.

[Watch our exclusive clip of a scene between Catherine Keener and Christopher Walken in the video player at the top of the page.]

The internationally renowned Manhattan-based Fugue String Quartet at the center of the movie has been performing and touring together for nearly 25 years. To celebrate the anniversary, they are rehearsing to play Beethoven's Opus 131, which has seven continuous movements.

As a series of midlife health and personal issues threaten to tear the quartet members apart, they struggle to stay together. The turmoil begins when the patriarch, cellist Peter Mitchell (exquisitely portrayed by Christopher Walken, who is elegant and dignified in this role), announces that he is suffering early symptoms of Parkinson's disease and is considering withdrawing from the group. His protégée, violist Juliette Gelbart (played by the always delightful Catherine Keener), can't imagine the quartet carrying on without him. Meanwhile, her husband, second violinist Robert Gelbart (Philip Seymour Hoffman, who is also always delightful), enters into a power struggle with first violinist Daniel Lerner (Mark Ivanir of Schindler's List).

The film's subplots underscore the interconnectedness of human relationships. Robert, devastated by his wife's lack of support in his lobby to share first violinist position — and haunted by the longtime fear that she doesn't love him nearly as much as he loves her — embarks on a briefextramarital affair. His and Juliette's daughter, Alexandra (British actress Imogen Poots), also a talented musician, questions her parents' priorities and, as if to wreak revenge on her father, enters into a romance with Daniel. Melodramatic, yes — but for those of us who've lived a little, understandably so.

The musical interludes in the film are beautifully done. Unlike another film (with a similar title) coming out later this year, A Late Quartet doesn't shy away from re-creating realistic music-making by its actors; several musical trainers were engaged during the filmmaking. And the film's New York scenes rival any from Woody Allen's works. Perhaps because this is director/writer Yaron Zilberman's debut feature, too many moments in A Late Quartet come off as overly earnest and overly artsy — and could have benefited from a lighter Woody-ish touch.

Still, this is a worthwhile exploration of commitment, creative collaboration and the complications that come with deep personal bonds — the disharmony of life unfolded alongside a harmonic score.