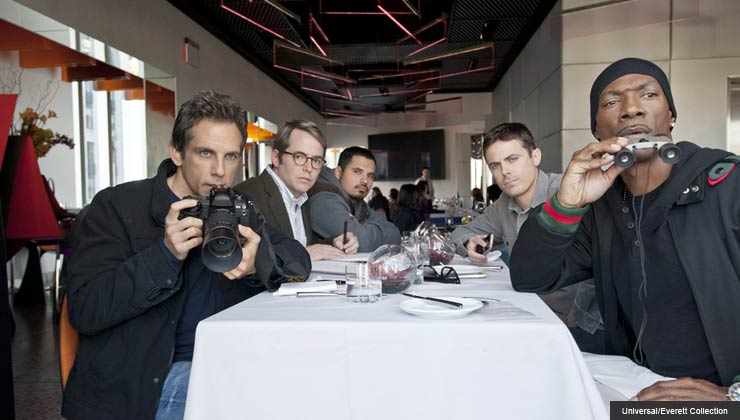 En español  |  The caper comedy Tower Heist won’t make us better people, and we won’t come away having learned anything new about the human condition. But give the film this much credit: It allows us to enjoy Alan Alda’s engaging presence in something more than a cameo role, and Eddie Murphy as something other than a talking donkey.

For both of those small blessings we can be thankful, even though Tower Heist seems satisfied with compulsively coloring inside the lines when it should be scribbling wildly at the margins of the page. There are some good laughs and, towards the end, one genuine thrill, and I suspect that’s exactly what the filmmakers were aiming for.

Opening the week after Bernie Madoff’s wife and son shredded the family patriarch and handed the bloody pieces to Morley Safer on 60 Minutes, Tower Heist has a nice timely setup: A legendary popular Manhattan broker named Arthur Shaw (Alda) has been arrested for squandering the life savings of thousands of investors — including the blue-collar staff of the posh New York apartment house where he occupies the penthouse suite. While Shaw cools his heels under house arrest on the top floor, a ragtag team of those he ripped off conspires to break into his place, find the cash stash they’re certain is hidden there and repay themselves the money he swindled from them.

The likeable crew includes the building manager (Ben Stiller), the concierge (Casey Affleck, one of the screen’s fine actors, clearly slumming), a down-on-his-luck stockbroker (Matthew Broderick) and a rotund Jamaican maid (Oscar nominee Gabourey Sidibe, who broke all our hearts in Precious). Of course, none of them has ever stolen so much as a kiss, so they enlist the guidance of a real-life street criminal named Slide (Murphy) to coach them in the finer points of grand theft.

The team’s floundering attempts at becoming crooks — and Slide’s exasperation — provide the film’s genuine laughs. As a beautiful FBI agent who suspects something is up, Téa Leoni once again shows herself to be one of the screen’s most appealing comic actresses — and also raises the perennial question: Why don’t we see more of Téa Leoni?

Stiller does that deer-in-the-headlights good guy bit better than anyone, and Affleck and Broderick seem to be having a contest to see who can make their mouths hang open wider.