En español  |  You don't have to be in middle age or beyond to appreciate The Descendants as the transcendent grownup movie of the year. Still, name your 50-plus angst and writer/director Alexander Payne's funny, tragic film probably has a take on it: the inevitable intersections of love and loss; the disappointments we feel in others (and that others feel in us); the shadow of betrayal that hovers over friendships and family; the dual instincts to pamper and toughen our children; and the battling impulses to reveal our lifelong secrets — or keep them to ourselves, even when they claw to escape so violently it hurts.

See also: We Bought a Zoo

George Clooney is Matt King, a leading (and wealthy) citizen of Hawaii who is directly descended from both native royalty and the white settlers who brought Western culture to the islands. When we meet Matt, he is at the bedside of his comatose wife, who has suffered brain damage in a boating accident. Unfortunately for all concerned, it appears that lapsing into a coma is a bad strategy for keeping family secrets, for no sooner do the life-support systems start beeping away than Elizabeth's infidelity start bobbing to the surface. Matt is shocked beyond belief — a fact his teenaged daughter (Shailene Woodley) condemns as clear evidence of his aloof attitude toward the marriage in the first place. 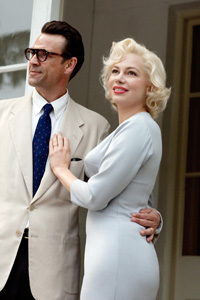 My Week With Marilyn

In My Week with Marilyn, director Simon Curtis manages to offer up authentic insight by presenting just a tiny slice of what we all would agree was Marilyn Monroe’s overexposed life.  He does this largely thanks to the inordinate talent of his star Michelle Williams, who walks the walk, talks the talk and conveys the tragedy that took Monroe from us much too soon. — Meg Grant

Determined to salvage what he can of his family unit, Matt fetches that daughter from her pricey boarding school (where she'd been sent, not incidentally, to kick her booze habit), and brings her home to stay with him and his younger daughter (Amara Miller) for the duration of the crisis.

Not that his wife's health is Matt's only concern: He's also the sole trustee of the family’s last parcel of land, a pristine stretch of choice beach property. Matt’s extended collection of King cousins is itching to sell the land for a cool billion dollars or so, and it seems like a done deal. But these days Matt, who has final say over disposition of the property, is suddenly not so sure.

Matt is clearly being tugged at from all sides, and his particular problems are certainly writ larger than are those of the rest of us. But in the skilled hands of Payne and Clooney, we identify with Matt completely. After all, don't we all face issues of life and death at some point? And who of us hasn't felt the sting of betrayal or the weight of family responsibility? True, they all come crashing down on Matt simultaneously with the impact of an Acme anvil on Wile E. Coyote, but Clooney's reactions are so authentic, progressing from dazed to sorrowful to defiant, we waste very little time feeling sorry for him. And occasionally, as when Matt finally confronts his wife's lover, he is at once riveting and laugh-out-loud funny.

If our heart breaks for anyone in The Descendants, it is for Elizabeth's father, played with tough-guy stoicism by the wonderful Robert Forster. Anyone who has witnessed first-hand the unnatural tragedy of a parent facing the death of an adult child will recognize Foster's unfocused anger, his labored movements, as if the universe has turned itself upside-down upon him. Mercifully, Payne and his fellow screenwriters Nat Faxon and Jim Rash have given Forster some of the film's funniest scenes as he tries to comprehend the ways of his older granddaughter's goofily smiling boyfriend (Nick Krause), a dimpled innocent who manages to rub everyone the wrong way until, in a marvelously played scene, he explains himself to Matt in a half-whispered middle-of-the-night encounter.

The Descendants is full of such unexpected moments, when characters we thought we knew reveal themselves to be not mere outlines in a script, but fully realized individuals with stories about how they got to be who they are. Judy Greer, playing Julie, a woman who we at first dismiss as the clueless spouse of a philandering husband, nearly steals the whole movie toward the end, fashioning Julie as a true hero of the piece. Likewise Beau Bridges, laughing and immensely likable at the start as Matt's fun-loving cousin, morphs into something quite different as Matt expresses his concerns over selling the family property.

And then there are Woodley and Miller as Matt's daughters, annoying as anything at the start. But they grow on us, by design, as the film progresses. The film's final shot, of father and daughters mundanely adapting to their new world order, is as lovely a family snapshot as you ever will see.

As Matt, Clooney is extraordinary; his scenes alone with his comatose wife, barking his anger, sobbing his regrets, whispering  sadly resigned words of love, would be nearly impossible to watch if we didn't care so deeply for his character. He's a perfect match for Payne, whose prior films About Schmidt and Sideways both studied, with humor and heart, the travails of adults forced to face the facts of growing up. Both Clooney and Payne share an uncanny knack for that wistful smile in the face of havoc; for conveying the peace that comes from having lived a life, from having seen disasters come and go, and from knowing that, one way or another, this too shall pass.