In Rush, two-time Academy Award winner Ron Howard reteams with writer Peter Morgan, with whom he worked on Frost/Nixon, for a movie that offers heart-pounding action while unveiling the relationship between two lifelong rivals.

In terms of adrenaline, Rush couldn't be more different from Frost/Nixon, but as films offering period backdrops (both are set in the '70s) and a nuanced portrait of two complex, real-life figures, they are similar. 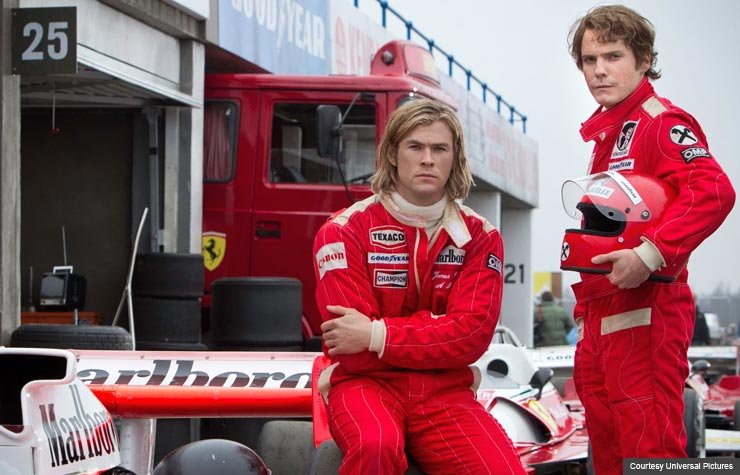 Rush takes place in Europe's Formula 1 racing scene's sexy heyday, when its gladiator-like, top-notch drivers enjoyed rock-star status. James Hunt (played by the hunky Chris Hemsworth of The Avengers and Thor), a blond, hard-partying British playboy who wildly pushes the limits on and off the track, has held the world title for seven years.

His rival is the mousy Niki Lauda (Daniel Brühl of Inglourious Basterds and The Bourne Ultimatum), a disciplined, methodical Austrian perfectionist, who finally steals the crown in 1975.

Watch: Ron Howard takes us through intense racing in "Rush"

Teasing death, both drivers are equally driven, though in completely different ways. Their divergent styles become fully evident in 1976, when they compete in a series of Grand Prix races beginning in Brazil, then in Europe and Japan, each racking up wins and losses until Lauda crashes on a controversially dangerous track in Nürburgring, Germany, in August 1976. He is critically injured and left with severe burns around his face and head (one ear is permanently gone, and his eyelids must be rebuilt). Astonishingly, he returns to race in the Italian Grand Prix just six weeks later.

Hemsworth's pretty-boy rep gets reinforced here, yes, but he was made for the role of Hunt. And Brühl, whose facial expressions alone convey Lauda's steel-trap psyche, is on top of his game. In virtually every scene, the actors do a terrific job playing off each other, projecting distinctly colorful, fascinating personalities. Howard's direction and Morgan's writing must be credited for this interplay as well.

Supporting actresses Olivia Wilde (Tron: Legacy) as Hunt's wife, Suzy Miller, and Alexandra Maria Lara (The Reader) as Marlene Lauda do fine jobs, although the guys are the real story.

Spot-on costume design, overseen by Julian Day of Nowhere Boy, along with brilliant production design and cinematography by Mark Digby and Anthony Dod Mantle, both of Slumdog Millionaire, put the viewer right there on the racetrack stands — and even, at times, behind the wheel of an F1 car, which Hunt once described as "a little coffin surrounded by high-octane fuel."

Not quite a novice when it comes to filming car racing (the first movie he directed, back in 1977, was Grand Theft Auto), Howard was insistent on making the Formula 1 race experience as authentic as possible in Rush.

Whenever he could Howard shot at actual race locations, including Nürburgring, and the film's press notes list 20 pages of credits, including race mechanics, Formula 1 historians and advisers, driver doubles and more. That said, Howard's technical achievements here are just as impressive as his artistry, illustrated in his always compelling camera angles and in his choice of Academy Award-winning Hans Zimmer (The Lion King) to compose the film's score. It captures the era as well as the solitary journeys of Hunt and Lauda, two risk takers finding purpose by pushing the limits.

James Hunt died of a heart attack in 1993 at age 45; Niki Lauda, who retired from racing in 1985, is now 64 and consulted closely with Morgan on the script and with Brühl on his character. Lauda has said that, in the end, his rival Hunt was one of the people he most respected in life, and the best part about Ron Howard's Rush is that you come away understanding that what separates us from one another in so many ways is precisely what connects us.