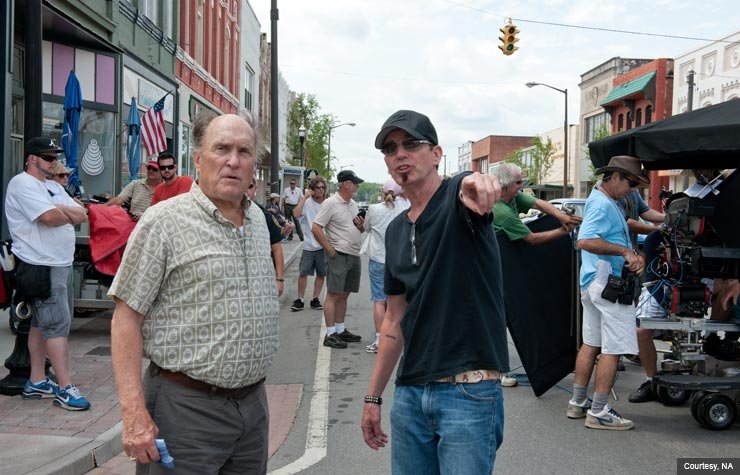 Robert Duvall and Billy Bob Thornton on the set of "Jayne Mansfield's Car."

Midway through Jayne Mansfield's Car, a multigenerational drama cowritten and directed by Billy Bob Thornton, the family patriarch takes his grandson to a traveling sideshow featuring a crashed Buick Electra billed as the one in which the Hollywood sex symbol lost her life in 1967.

"I actually saw that car once with my dad," recalls Thornton, who also costars in the film, which is set in small-town Alabama at the height of the Vietnam War. "It was just like it is in the movie. You paid 50 cents or a dollar to go look at it. I always thought that was such a bizarre thing."

The Caldwell clan is forced to confront its dysfunction after Skip's mother, who had abandoned the family years earlier, dies and her English widower husband (John Hurt) and his grown children return her body to Alabama for burial.

"I love culture clash movies, and I wanted to do one about an English family and a Southern family having to come together," says Thornton. "I like to watch people dig through the superficial stuff to get to what it's really all about."

The AARP Leisure Newsletter features movie reviews, great games and more delivered to you every month

The role of Jim was inspired by Thornton's own dad, a high school history teacher and basketball coach who died when the actor was 17.

"He used to take me and my brother to see the aftermath of car accidents from the time I was 4 years old," Thornton says, who was raised in Arkansas. "I always wondered about his fascination with that, but he wasn't a very forthcoming sort of guy. We lived in the same house for 17 years and I didn't know him at all. I don't think my father ever said he loved me. I don't think he ever hugged me."

The actor, newly 58, also attributes the distance between himself and his father to the tenor of the tumultuous times in which the movie is set.

"Those generations just didn't communicate," says Thornton, a self-described "child of the '60s" who is clearly amused by the false perception that the youth revolt of the era somehow missed the conservative American South. "It wasn't like we were in San Francisco," he says, "but we had hippies in the South. I was a hippie. It was a rich time."

Regardless, Thornton hopes the film won't be pigeonholed simply as a '60s-era antiwar movie. He concedes, however, that it contains some strong antiwar rhetoric, including a scene in which "Skip says, 'I don't believe that people don't talk about war because it brings up horrible memories. I believe it's because people really don't want to hear [about] it.' "

"There will be people who will see it as an antiwar movie, maybe," the actor continues, "and there'll be people who see it as kind of the truth. We just present these things. You do your own thinking about it."

Fannie Weinstein is a freelance writer.

JAYNE MANSFIELD'S CAR: Billy Bob Thorton directs and stars in a 1960s drama he also cowrote. The film's sole connections to the sex symbol are its title and a scene involving the car in which she was killed.