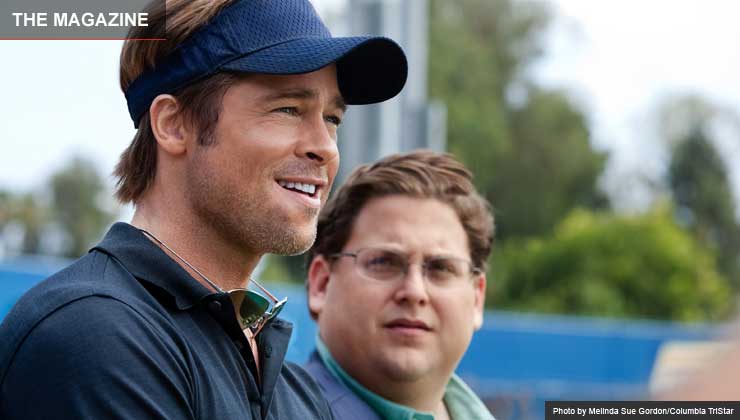 En español  |  What’s great about Moneyball, a film about the business of baseball that’s based on a book of the same name, is that it entertains primarily as a character study, even if you’re not a student of the sport. The movie zooms in on a chapter in the real life of Oakland Athletics general manager Billy Beane who, after his best players were poached by wealthier franchises following a successful 2002 season, attempted to put together a winning team on a shoestring budget.

A divorced father of a preteen daughter, Beane, played by Brad Pitt in one of his best performances to date, is essentially married to his job — though he’s something of a hands-off general manager, a bit of a loner who follows the game by listening to play-by-play calls on the radio or by texting his staffers. He’s a tragic figure, having turned down a scholarship to Stanford to play for the New York Mets right out of high school, then failing to live up to his promise. As a result, he brings a different perspective to the job of building a baseball team, and is open to nonconventional strategies. The new approach is inspired a nerdy Ivy League economics major named Peter Brand (brilliantly portrayed by Jonah Hill), who evaluates players not based on their body build, as traditional scouts do, but on individual percentages that suggest their ability to score runs. He deals in numbers and equations, not subjective judgment. Over the objections of Oakland’s manager, Art Howe (Philip Seymour Hoffman, with his pot belly and taciturn demeanor, who’s in fine form in this role), Beane and Brand assemble a crew of has-beens and would-be’s, assign them unexpected positions and lead them to success. In doing so, Beane launches a new way for baseball officials to judge the value of players.

At a Moneyball press conference at the Toronto International Film Festival, a reporter asked Pitt if he might draw parallels between the film’s portrayal of how to achieve success to Hollywood’s traditional ways of casting movies. Pitt said comparisons could definitely be made, and added that, going forward, he hoped to see more unknown actors get roles in Hollywood productions. It was an ironic comment, given that Moneyball, once set to be directed by Steven Soderbergh until Columbia pulled the plug due to budget concerns, was relaunched when the bankable Pitt, who had already been cast as Beane, agreed to stay on the project. This time, Bennett Miller (Capote) directs, with a bit too light a hand. Aaron Sorkin and Steven Zaillian wrote the script, which could have used tightening (the film runs a full two hours, 13 minutes), but which offers up lots of lines that zing. The interplay between Pitt and Hill is hilarious, especially as their characters’ plan moves along to a successful climax.

The underlying notion of how America arrives at and defines success could have been explored more deeply here, allowing the viewer to leave the theater thinking. Instead, Sorkin and Zaillian chose to develop the complexities behind Beane’s motivations, including his commitment to being a good father to daughter Casey (charmingly played by Brothers & Sisters’ Kerris Dorsey). No amount of money would keep him away from being there for her. Moneyball’s parental ties storyline may, in the end, be satisfying enough.