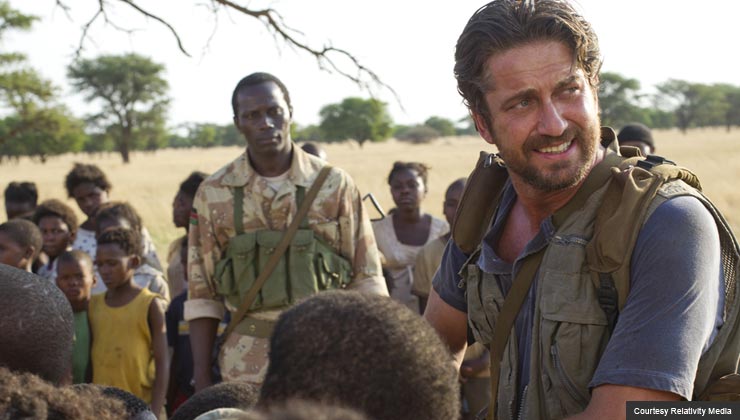 The title is clunky. It telegraphs the flawed nature of the film Machine Gun Preacher, written by screenwriter Jason Keller. Though based on a real story, the narrative here lacks both complexity and subtlety, leaving the viewer thinking, "If this wasn't true, I would never believe it." Still, this is a character portrait of a fascinating guy attempting to turn his life around in a tough, modern-day environment, and director Marc Forster, known for exploring troubled characters in difficult circumstances in Monster's Ball and The Kite Runner, manages to mete out some moving moments and build the action.

Sam Childers (played by Gerard Butler, trying too hard at times here to move away from playing one-dimensional action heroes, as he did in The Bounty Hunter, and romantic leads, as he did in P.S. I Love You) is a self-described Pennsylvania hillbilly, a drug-using motorcycle gang member with a wife and a young daughter. Fresh out of prison, he mainlines heroin with his buddy Donnie (played by Michael Shannon, giving his all) and nearly stabs a hitchhiker to death after the man pulls a knife on them. Crashing and desperate over what he's done, Childers returns home to wife Lynn (Michelle Monaghan of Gone Baby Gone and Source Code), who has found God while her husband was in prison, and begs her to help him.

Soon, the newly converted-to-Christianity Childers is cleaned up and running a construction business. When an associate tells him he's going to Uganda on a relief mission, Childers tags along, takes a side trip to South Sudan (then called Southern Sudan), and witnesses first-hand the atrocities of a civil war where militias burn villages to the ground in night-time raids and conscript children on to their front lines. Childers, who sobs as he clutches a child killed by a land mine, has found his purpose. Back home, he becomes a minister, builds a church and exhorts his congregants to support his goal of opening an orphanage and a school in Sudan for the terrorized children there.

He's a flawed hero though. He takes on too much, spending increasing amounts of time in Africa while neglecting his own family in Philadelphia, and (endearingly, in my opinion) refuses to cast aside all his old ways — enthusiastically taking up arms (machine guns) whenever he or his charges are threatened. He gets criticized by other relief workers and local leaders for his apparent vigilantism. At the end of the film, in voice-over while several clips of the real-life protagonist roll (making you wish, after all, that, they'd done a documentary rather than a dramatization of this story), Childers defends his actions, saying, "If your kids had been kidnapped and I found them, would it matter how I bring them home?"

I wish Machine Gun Preacher had explored more grey areas: whether there's a right or wrong path to Christianity, a politically correct way to conduct philanthropy, a possibility for one to be human and god-like at once.

Still, Machine Gun Preacher asks noble questions. How do people change? How do they interact with one another? How do they care about what's going on in the world around them? The scenes shot in Africa are stunning though brutal, and both Forster and Butler (who's a co-producer) deserve credit for wanting to take their viewers on a trip few would otherwise venture.