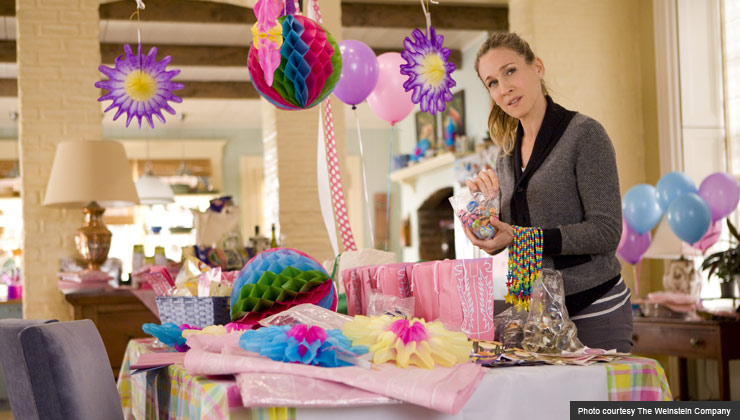 Sarah Jessica Parker and Pierce Brosnan star in "I Don't Know How She Does It."

Populated with endearing characters and punctuated with poignant observations about 21st-century family life, I Don't Know How She Does It manages to do the unthinkable: It examines the tough choices spouses and parents must make between home and work, and it never stops once to whine about it.

Sarah Jessica Parker is Kate, a Boston investment executive. Her husband Richard (Greg Kinnear) is a small businessman. Together they have two young children — and now, in middle age, they are both on the cusp of making long-awaited career breakthroughs. The story we follow more closely is Kate's, just because hers is the more complicated one: even in what many would call a more enlightened age, the tidal forces that pull at a mom seem somehow more agonizing. And just to make things more interesting, Kate's newly expanded work assignment requires her to travel and spend long days with a dashing New York financier played by Pierce Brosnan.

Adapted from a the bestseller by Allison Pearson, the film’s story arc isn't particularly well defined — as Kate tries to sort out who she is and where her priorities lie, the action meanders about, episodically presenting one quandary after another. Of course, in the end Kate finds her perfect balance: in a wish-I'd-said-that scene with her boss (Kelsey Grammar), who blusters a bit but, like virtually everyone else in the film, isn't really all that bad (the exception being Kate's sleazy office rival, played with wide-eyed disdain by Seth Meyers).

I love the way Parker is aging. After 47 years, she has a face that has laughed and cried, beautiful in a way that comes only to those who are comfortably real. Likewise Brosnan, who most women I know would still prefer as their tuxedoed James Bond fantasy, continues to find ways to collect each passing year as his new best friend. His character's charmingly awkward gestures toward Kate would seem dangerously irresistible if it weren't for Kinnear, who infuses in Kate's hubby the cuddly faithfulness of a warm puppy.

Never in the course of I Don't Know How She Does It do true nastiness or animosity raise their heads. The characters seem to understand that they are all being tossed about in the same hurricane, helpless in the face of a society that tells them they deserve everything and then scatters their varied dreams to the four winds.

I Don't Know How She Does It doesn't promise that the winds will ever die down completely, but it does suggest that they can be tamed, and even harnessed to speed you to your destination. But first, you need to know in which direction you really want to go.