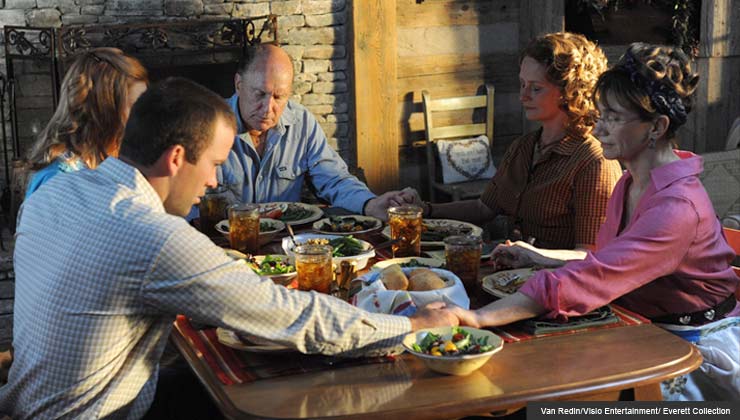 En español  |  I don't believe I have ever gone wrong when I've decided to spend a couple of hours at the movies with Robert Duvall. Even if over the years a certain sameness has settled over his choices of characters — a series of slow-talking old men whose casual speech and laconic manner mask some hard-won wisdom — he nevertheless brings a unique quality to each of them. And by the final reel, when the old fella is revealed to be harboring some personal pain or secret passion, we can hearken back to earlier moments in the film when Duvall, with his unerring actor's sense, has dropped almost subliminal hints to that effect along the way.

See also: Find out which states are rich in golf courses.

In Seven Days in Utopia he plays Johnny Crawford, a former pro golfer whose personal demons chased him from the links before he could ever make a name for himself. Duvall’s performance is almost serene, a master class in screen acting, and his costars are clearly drinking from Duvall's well of inspiration.

Foremost among them is Lucas Black as Luke Chisholm, a talented young PGA player who, in the film's opening scene, throws a final-hole tirade worthy of, in another sport and time, John McEnroe. He slinks away from the tournament and takes refuge in the small Texas town of Utopia, only to find his monumental meltdown playing nonstop on cable TV. But Crawford sees something of himself in the young man, and takes Chisholm under his wing. He promises that if Chisholm will spend one week under his tutelage in Utopia, "you'll find your game." Of course, the young man and the old man have different perspectives on just what a person's "game" should be. To Chisholm's surprise and occasional chagrin, Crawford's course of study includes fishing, oil painting and flying an airplane.

Black has long been among the more appealing young actors in the movies — he was unforgettable as the young boy in Sling Blade and was a welcome presence in Jarhead and Get Low, and his easy charm plays well against Duvall's rough-edged duffer. In fact, the film's town of Utopia seems populated with nothing but warmhearted souls. Chisholm is almost immediately adopted by a motherly hotel manager (Kathy Baker), a local widow (an underused Oscar-winner Melissa Leo), and most importantly her comely daughter (Deborah Ann Woll). Even the local tough guys, who see Chisholm as a big-city interloper, turn out to be not only without bite, but also without real bark. In a narrative sense, Seven Days in Utopia's weakest link is in its lack of a genuine bad guy to raise the story's stakes. When it comes to villains, we're left only with young Chisholm as his own worst enemy — and really, he's by and large such an agreeable chap, one who recognizes almost from the start that he needs to undergo an attitude change, that his inner conflicts seem like small potatoes.

Some in the audience will no doubt roll their eyes when Duvall's character directs Chisholm to the Bible for guidance, and steers him toward a more spiritual attitude in his search for balance in his life. Indeed, Duvall has always had apparent fondness for tough guys whose lives get turned around by the hand of God — he won an Oscar playing one in Tender Mercies and was nominated as another one in The Apostle. But you know, I see a lot of movies for a living, and a distressing number of otherwise very good films ask us to root for unrepentant (supposedly lovable) scoundrels, or to secretly cheer for over-the-top villains capable of unspeakable cruelty. Seven Days in Utopia invites us to pull up a rocking chair, watch the fireflies, and soak in some folksy friendliness while quietly contemplating the things that really make life worth living. What's more, it offers Robert Duvall as our trusted companion. It doesn't really get much better than that.