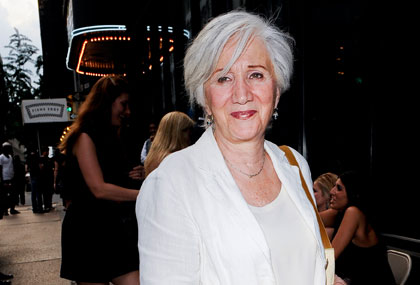 "Both husbands and wives need to get involved because [diabetes] changes your diet and you have to take medication, and it's important to not feel overwhelmed or defeated by it," Olympia Dukakis says.

Olympia Dukakis is in Los Angeles, 3,000 miles away from her home in New York City, resting up before starting another day of rehearsals for her role in the Greek tragedy Elektra. Dukakis takes on all eight roles of the Chorus in the play, which opens at the Getty Villa’s amphitheater in Malibu on Sept. 9, 2010.

• See Olympia Dukakis and her husband, actor Louis Zorich at the Orlando@50+ National Event. Do

“I’m one person trying to hold down eight different voices — it’s the most I’ve ever had to get into one body,” she says. “We — all the actors — get a great workout when we do a Greek play.”

In her 50-year career, Dukakis has embodied many voices in a range of roles. Her star-making turn as Cher’s mother in Moonstruck won her the Oscar for Best Supporting Actress, and she played the unforgettable Mrs. Madrigal in Armistead Maupin’s Tales of the City TV saga in 1993.

Now at 79, she is still acting in movies and plays that take her around the country, and on top of her busy schedule, Dukakis and her husband, actor Louis Zorich, have taken up the cause of prescreening for diabetes for those 65 and older.

Getting the message out

Staying healthy as they get older is something that Dukakis and her husband take seriously, especially when Zorich found out last year that he had diabetes. “It runs in Louis’ family, but just the women,” Dukakis says. “So it was a big surprise to him when it turned out he had it.”

Zorich has type 2 diabetes that he manages with medication, diet and exercise.

“He has always been health conscious and is more disciplined than I am when it comes to what he will eat or won’t,” she says. “He walks a full hour every day and he loves to feed the birds.”

Zorich’s diagnosis led to his and Dukakis’ involvement in Ask. Screen. Know., a program from the pharmaceutical company Novo Nordisk that educates seniors about free Medicare testing for diabetes. The symptoms — frequent urination, blurry vision, thirst, fatigue — can often go undiagnosed. “You can talk yourself into thinking it is just part of getting older,” Dukakis says. “But if you have a couple of those symptoms, you should ask your doctor for the blood sugar test.”

The screening provided by Medicare is free to anyone 65 and older with any one of the risk factors for diabetes, including family history, diabetes during pregnancy, high blood pressure or cholesterol, and being overweight or obese.

“Usually, people of that age have at least one of the risk factors,” she explains. “We want to get the message out that the screenings are free — most people don’t even know about it.”

Dukakis may be doing a play now, but she recently finished filming Cloudburst, a movie about an older lesbian couple who run away to Canada to get married when one of them is placed in a nursing home by her granddaughter.

“I’ve worked with the director before and we filmed up in Nova Scotia,” she says. “I’ve been so busy making movies this year I haven’t had time to see them!” She’ll also be starring in Tennessee Williams' The Milk Train Doesn’t Stop Here Anymore at the Roundabout Theatre in New York this winter.

With so much flying back and forth, Dukakis has a tried-and-true formula for staying on top of her game.

“On the plane, I try to drink a lot of water and I stay away from coffee and liquor,” she says. “To stay entertained, I always bring scripts and I love Sudoku, and I watch movies.”

For all her planning, on a recent flight from their vacation home in St. Martin, she and her husband were stuck on the tarmac at Miami for a few hours. “By the time I got to L.A., I was out of it,” she recalls. “It can be a real issue when you get older.”

In Orlando, Dukakis and Zorich will have a doctor with them to talk about the medical aspects of diabetes, but they are also going to talk about the importance of getting your spouse involved or having support if you discover you have the condition.

“Both husbands and wives need to get involved because it changes your diet and you have to take medication, and it’s important to not feel overwhelmed or defeated by it,” Dukakis says. “You can’t just say, ‘The hell with it,’ because that’s really saying ‘to hell with myself.’ That’s where the other person comes in.”

Dukakis says she has to take four pills at night and two in the morning, but despite the changes that growing older brings, it is clear that the actress has remained young at heart and in spirit. That is what keeps her going from stage to screen and back again.

“My yoga instructor just arrived,” she says, laughing. “I have to keep in shape.”