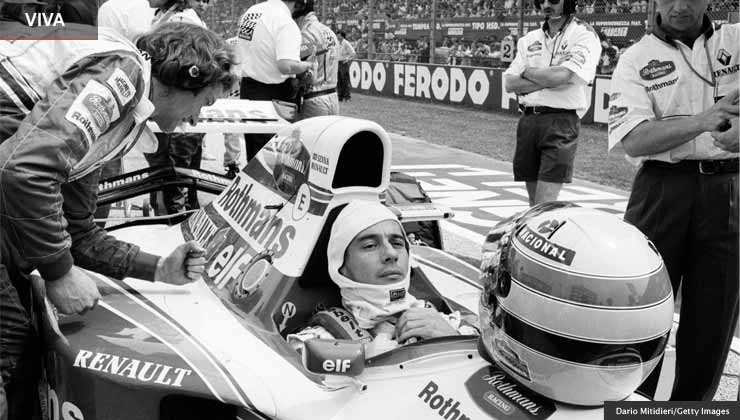 En español | Ayrton Senna blazed through the racing world like a comet. He was a three-time Formula One world champion and lightning rod of controversy who gave the citizens of his native Brazil something to cheer about as their country emerged from years of military dictatorship. He died in a 1994 Formula One car crash at the age of 34. Senna, a documentary about his life premieres August 12.

"He was a tough driver on the track, but away from the track he was always fighting for safety, standing up for other drivers," says Asif Kapadia, director of the documentary. "He was always fighting corruption [in the Formula One establishment]. And he came from Brazil, a poor country, but took on the Europeans and beat them, making [his countrymen] proud to be Brazilian."

Told with fascinating archival material, including fabulous driver's-point-of-view footage shot during Senna's races, Kapadia's film tells how a handsome child of São Paulo privilege began racing go-karts in Europe as a teen, and quickly graduated to the prestigious Lotus racing team. Senna won his first Grand Prix in his second Formula One year, then joined the McLaren team, where he was paired with top driver Alain Prost.

That relationship proved to be love-hate throughout Senna's career, as he and Prost traded world championships, and the Frenchman accused his teammate of on-track recklessness.

"Senna had an almost intimidating way of driving," says Kapadia, "But that was his style. He said, 'I cannot be happy in second place, I have to be leading.'"

The Brazilian also butted heads over safety issues with what the film depicts as a corrupt Formula One establishment headed by Jean-Marie Balestre, a Frenchman who publicly championed Prost, shrugged off Senna's safety concerns and suspended him after a hugely controversial crash with Alain Prost at the 1989 Japanese Grand Prix. Despite all this, Senna managed to enchant a global public with his passion and flair. And he became a national hero in Brazil, rivaling soccer superstar Pelé in popularity as an entire country followed his feats on and off the racetrack, dating local celebrities like children's television show host Xuxa and countless supermodels. It was a time when Brazil was, says Kapadia, "coming out of a dictatorship, the economy was a mess and he was the guy who internationally was proud to hold up the [Brazilian] flag."

Senna ends on a highly dramatic, and ironic, note. Driving what many considered an inferior car for the Williams F1 Racing Team at the San Marino Grand Prix  —  where one driver crashed and another killed during practice runs  —  the Brazilian nonetheless decided to race, crashed into a wall and died. Senna was given a state funeral in Brazil, where 500,000 people crowded the streets to watch the coffin pass. Yet he left an important legacy: Formula One safety standards were beefed up, and, since Senna's death, not one driver has been killed.

And after his death the Brazilian became a legend, thanks in no small measure, said Brad Spurgeon in a New York Times piece published on the 10th anniversary of Senna's death, "to a combination of his racing style, his passionate win-at-all-costs determination and his innate ability to elicit emotions from people." Senna was voted the greatest Formula One driver of all time in a recent Autosport magazine survey that canvassed the views of more than 200 top drivers.

"He was never a quitter," says Kapadia, who believes Senna's last race, in the end, makes his story a tragedy because "he can't walk away."

You may also like: New documentary produced by Eva Longoria.