If you're like me, you've spent too much time in meetings listening as astonishingly young people patiently try to explain why failing to tweet not only is "professional suicide" but also may indirectly cause the annihilation of you, your family and society as we know it.

Each time I smile and nod, then head back to my defiantly analog office (I have a record player in there), where I suddenly realize I still don't know my apps from my elbow. And so I keep holding on, holding on, desperately hoping I can spin out my career before someone tries to implant Moviecritic 1.0 into my cranium. 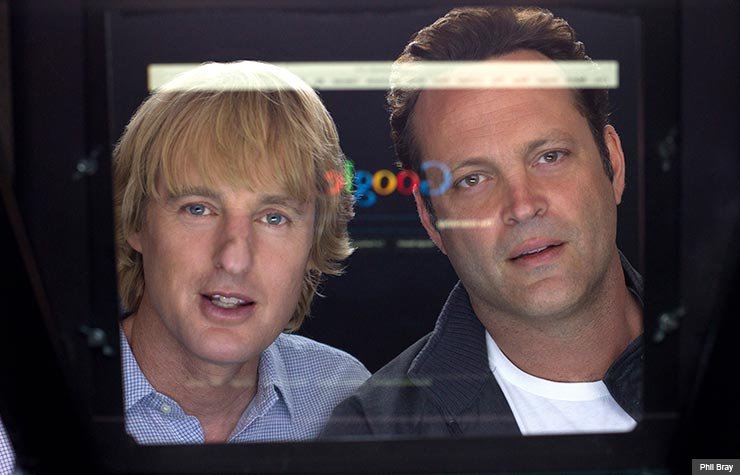 Owen Wilson and Vince Vaughn star as misplaced watch salesmen in "The Internship."

This is the dilemma of the two guys in The Internship (Vince Vaughn and Owen Wilson), a pair of middle-age watch salesmen who, faced with a world where no one wears a watch anymore, have to reimagine themselves in a digital age. They make the unlikely choice of taking internships at Google, where they are thrown into a summer-long competition with a hundred or so fresh young things. The winning team will land actual paying jobs with the Internet giant.

In the movie biz, this is called a "fish out of water" story, and it's a pretty good one.

I was looking forward to The Internship because Vaughn and Wilson, besides being a most appealing couple of dudes, starred in one of the funniest movies of the past decade, Wedding Crashers. In that film they were a couple of cads who insinuated themselves into wedding receptions, partied until dawn and bedded the most beautiful bridesmaids.

The Internship isn't nearly so edgy. We know from the start that Nick (Wilson) and Billy (Vaughn) are basically decent chaps who have simply been overwhelmed by the march of progress, and the script of The Internship, by Vaughn and Jared Stern, allows the boys to grow both professionally and personally.

YouTube: Catch a video preview of The Internship at Movies for Grownups on YouTube and enter for a chance to win a Blu-ray copy of Identity Thief, starring Jason Bateman and Melissa McCarthy

The scenes involving the two trying to fake it through a FaceTime job interview (sitting on tiny chairs at a children's library, because they don't own a computer with a camera) and valiantly proposing ideas for new mobile applications — each of which has long been around — are among the funniest. But for the most part The Internship succeeds because of a feel-good vibe that resonates from beginning to end.

This week I've been watching a new Criterion Collection Blu-ray Disc of the 1936 British film Things to Come. The script was written by H.G. Wells, and besides presenting a chillingly accurate depiction of the coming horrors of World War II, it concludes with a vision of a utopian future, in which the relentless progress of science ensures a new Golden Age for humanity.

Everyone in this Wellsian future loves it, except for a spoilsport Luddite played by Cedric Hardwicke. "What is the good of all this progress, onward and onward?" he demands on a video broadcast (one of the screens we see it on looks an awful lot like an iPad). "We demand a halt!" he declares. "We demand a rest!"

He's supposed to be the villain of the movie — Wells believed in progress like the pope believes in God — but I, for one, find him to be the film's most sympathetic character. Couldn't we all use a breather now and then, just a little time to get used to the magical devices we have in our hands before something more shiny and irresistible starts screaming to replace it?

Alas, the answer to that question appears to be, "No, and shut up." At least in The Internship that message is delivered with a wistful smile.